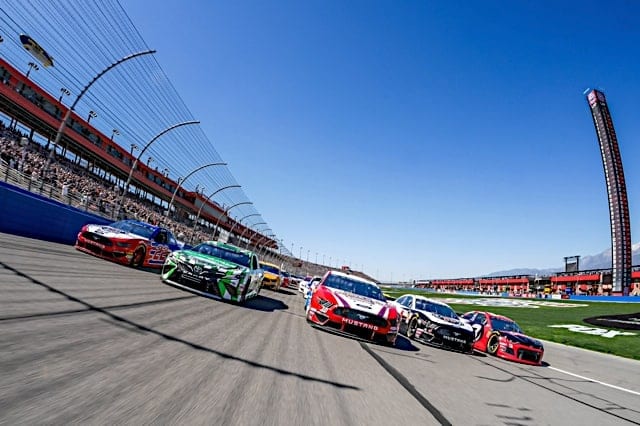 “Martinsville is under the lights, woooo!”

“Darlington is opening the playoffs?”

“Hmm… ISM is the championship race.”

“What in the world is going on at Pocono?”

Many drivers, teams, owners, officials and tracks have responded well to the news. But for many fans, changes can be quite scary. That’s led to a mixed bag of opinions and concerns.

For those on the fence in the NASCAR community, let’s take a step back and look at history. We have grown accustomed to the same sort of traditional schedule in the last several years. That’s mainly because there has been little in the way of dramatic adjustments; no new facility has been added, for example, since Kentucky Speedway in 2011. (The Charlotte Roval is just a different configuration of Charlotte Motor Speedway).

But history tells us that NASCAR has never really had a set schedule, period.

Since 2001, the Cup Series has competed 36 times a year at a variety of different racetracks. Geography ranges from Homestead-Miami Speedway in south Florida all the way to wine country in northern California (Sonoma Raceway). The series races in multiple cities on both coasts and seemingly everyplace in between.

Yet prior to 2001, 36 NASCAR Cup races was not a traditional number. The sanctioning body has held anywhere from eight races in NASCAR’s inaugural season, 1949, to a whopping 62 events in 1964.

In the 1950s, the series never had a season that consisted of the same schedule the year prior. Additionally, eight of the 10 seasons that decade had different schedule lengths. These ranged from 19 to 56 events depending on track availability. 1953 and 1954 saw 37 races apiece, similar to what we have today. But traditionally, the race calendar was longer in that era as drivers jumped from short track to short track across the southeast. Few drivers drove in all the races due to the high total.

After a grueling 62 events in 1964, a Cup Series high NASCAR reduced the schedule to a mere 55 the following season. Some conformity followed, as 49 events became the number between 1966 and 1968.

However, NASCAR began to realize that the schedule needed to be consolidated to make the sport mainstream entertainment. It had to cater to more than just a southeastern audience to be more marketable. As a result, the arrival of series sponsor Winston caused a massive dropoff from 48 events in 1971 to just 31 in 1972.

Since that modern era began, the number of races per year has remained steady. But there have always been at least minor adjustments. In fact, between 1972 and 2000, the longest consecutive streak of the same schedule size was just seven years. NASCAR ran 29 events a season from 1986 to 1992. But even then, tracks got switched around. Sonoma was added in 1989, for example, replacing Riverside for good.

Longtime fans might also think the hallmark of the NASCAR schedule is its season opener, the sport’s Super Bowl: February’s Daytona 500. Well, that’s not quite true either. It was not until 1982 that the “Great American Race” became the first bullet point on the schedule. Usually held in mid-January, the late Riverside International Raceway actually hosted NASCAR’s first event of the season in 1965, then 1970-81.

The spot of NASCAR’s finale has also jumped around, too. Homestead-Miami Speedway has held the honor since 2002. The track’s south Florida backdrop has played host to some of the sport’s most intense championship battles under the current playoff format. It’s also been the site of Tony Stewart, Rusty Wallace and Dale Earnhardt Jr.‘s emotional final laps.

But, at the conclusion of 2019, Homestead will turn the reins over to ISM Raceway in 2020. Change has come to the sport’s finale once again.

In the modern era, Riverside, as well as Texas World Speedway, Rockingham Speedway and Ontario Motor Speedway once crowned NASCAR’s champion. But the biggest one of them all was Atlanta Motor Speedway. From 1987 to 2000, AMS took center stage as the season concluded. Like Homestead, Atlanta provided the backdrop to career-defining moments. The most notable came in 1992, when independent driver Alan Kulwicki fended off an onslaught of challengers to claim his lone and almost improbable championship.

That same day, King Richard Petty, the immortalized and most accomplished American hero of stock car racing, took his final career lap in a battered Pontiac, crossing the finish line in 35th. Four positions ahead of him, a 21-year-old upstart driver named Jeff Gordon ran his first NASCAR Cup race.

Almost a decade later, Atlanta was prepping to crown a champion one last time. But a country’s unwavering patriotic spirit and respect that fall had to give way. New Hampshire Motor Speedway actually hosted the final race in November 2001. Two months earlier, NHMS postponed its event following the September 11 attacks. That gave it a one-time slot as the season finale and a special place in NASCAR history.

In a twist, Jeff Gordon was set to give Atlanta one last hurrah as its final champion crowned there. Instead, a belabored sport trekked all the way to northern New England to close out a trying season.

Two other tracks that have seen their fair share of dramatic moments, Darlington Raceway and Daytona International Raceway, will play a significant part in the 2020 schedule changes. The 2.5 mile superspeedway of Daytona will now close out the regular season while egg-shaped Darlington will now open up NASCAR’s playoffs. Both have been closely associated with holidays throughout their long, illustrious histories.

The Lady in Black, as Darlington is often dubbed, has gone down in stock car fame for hosting events on Labor Day weekend. Meanwhile, Daytona’s second race, the Firecracker 400 (as it was originally called before the era of corporate sponsorship flowed in) has been closely aligned with Fourth of July festivities. In fact, decades ago, the Firecracker 400 was often held on the actual holiday.

With the overhauled schedule, Darlington keeps its traditional date while Daytona’s second race loses it for the first time in its nearly 60-year history. While that may be discouraging for longtime fans and traditionalists alike, we must remember Darlington actually had a break in tradition of its own. From 2004 to 2014, Darlington’s Labor Day race was absent from the schedule, replaced by a race at Auto Club Speedway. Marketability problems, NASCAR’s big city boom, and legal conflicts all contributed to the Southern 500’s surprising shift. After a move to November, then Mother’s Day Weekend, the Labor Day tradition was restored and welcomed back with open arms in 2015.

Certainly, NASCAR’s 2020 schedule is filled with tough adjustments for traditionalists. But what if Richard Petty’s career concluded at Homestead? Would it be any different if Dale Earnhardt Jr. hung up the helmet at Bristol? What would people be saying if Alan Kulwicki held off a throng of determined drivers at Phoenix? What if Darlington was always on Memorial Day weekend and the Coke 600 was always on Labor Day weekend?

The answers, to me would make little difference. Instead, a fresh schedule means the sport keeps evolving. For this simple reason, we are not racing around small dirt tracks in brand new, 100% stock Ford Fusions and Toyota Corollas. NASCAR competes on a wide variety of unique tracks (or so we think) that have developed after decades of fine-tuning.

So why do we get so frazzled when we mix things up? The tracks are still there; they haven’t gone anywhere. They may have just altered dates, just like it’s always been throughout NASCAR history.