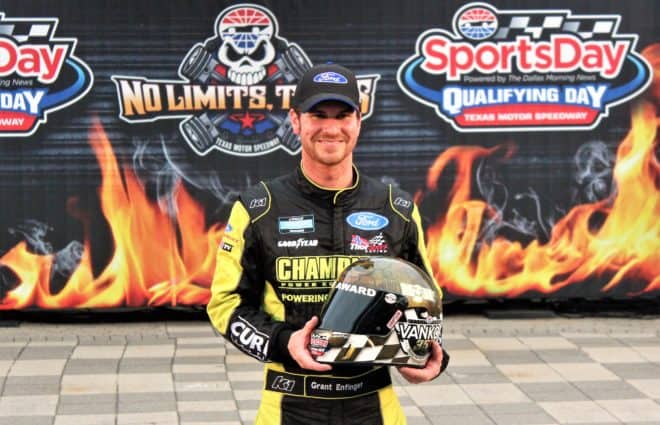 Grant Enfinger will lead the field to the green flag for Friday night’s (March 29) Vankor 350 at Texas Motor Speedway. The driver of the No. 98 Ford just narrowly edged Brett Moffitt with a 187.35 mph lap. It’s Enfinger’s fourth career pole and his first at TMS.

Rookie Sheldon Creed will start third in his fifth straight top-10 qualifying effort. Kyle Busch and Austin Hill round out the top five.

Tyler Ankrum, who’s making his first start on a mile-and-a-half track since turning 18 a couple of weeks ago, will start sixth.

“This is a really cool experience,” he said earlier in the day. “I’ve always loved Texas.”

.@TylerAnkrum just jumped up and down on pit road after getting out of his truck. I think it's safe to say he's having a good time. #NASCAR

Johnny Sauter will start seventh, alongside teammate Ben Rhodes. Stewart Friesen and Harrison Burton round out the top 10.

Norm Benning was the only driver who didn’t qualify after Bayley Currey withdrew following a fire during first practice Thursday (March 28).

The green flag for the Vankor 350 will fly around 9 p.m. ET with coverage on FOX Sports 1

Content Director Beth heads up management of our 30-person staff, acting as Tom’s main assistant with technology and personnel while working as Frontstretch’s Truck Series expert. The author of Truckin’ Thursdays and the coordinator of the site’s pre and post-race coverage, she also runs a periodic charity column that spotlights when NASCAR gives back. A childhood transplant to Texas, Beth is a 15-year writing veteran who has contributed content to BRANDT and Athlon Sports, among other outlets.
@NASCARBeth
Previous Jimmie Johnson Leads Lone Cup Series Practice at Texas Motor Speedway
Next Tyler Reddick, Kyle Busch Lead Texas NASCAR Xfinity Series Practice For My Bariatric Solutions 300 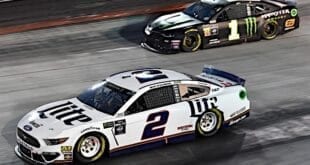