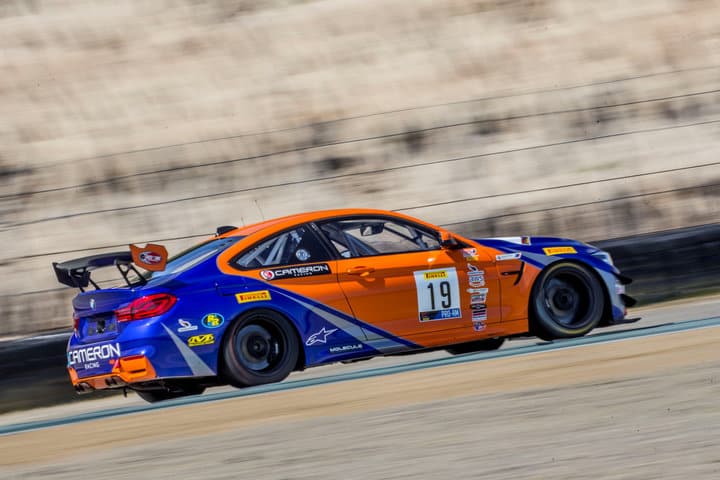 The Racers Group’s Derek DeBoer started on pole in his Porsche Cayman GT4 MR, but the man on the move was Brett Strom.  Strom started third and was able to snag the lead in his BMW M4 GT4 at the Corkscrew on the first lap.   Behind Strom, the fastest man on the track early on was Vesko Kozarov in a new (to the team) Audi R8 LMS GT4.  The team acquired a different chassis that was campaigned by Case-It Racing with Flying Lizard last year after teammate Jeff Burton (Note: Not the same Jeff Burton that currently works for NBC Sports) wrote off their previous car at Circuit of the Americas.

Kozarov was able to catch Strom for the lead right as the mid-race pit window opened and pressured Strom hard.  Eventually, Strom dropped a wheel exiting Turn 10, which allowed Kozarov to take the lead prior to the mandatory stops.

Once the stops were completed, Burton ended up with a decent lead over Gottsacker.  However, Gottsacker’s team violated the minimum pit lane delta (teams had to spend a minimum of 73 seconds on the pit lane during their stop), resulting in a stop and go penalty.

Strom’s teammate, Daren Jorgensen, fell back down the order, then eventually stopped on course with a broken fuel pump with 14 minutes to go.  This brought out the race’s one and only caution.

Jorgensen’s misfortune put Liefooghe right up on Burton’s tail with a much faster car.  With seven minutes to go, Liefooghe faked a move to the inside at the Corkscrew.  Burton bit on it and went into the Corkscrew too fast.  That allowed Liefooghe to get past on the exit.  From there, Liefooghe pulled away to take the win.

USRD’s Ginetta for Casey Dennis and Jeff Bader were second, followed by Kozarov and Burton, who won the Am class.  ST Racing’s Samantha Tan and Jason Wolfe were fourth, followed by Gottsacker and Miller after their penalty.

Liefooghe started from the pole in the second race and proceeded to run away from the pack.  The goal here was to open up enough of a gap so that Quinlan could run his own pace and still pick up the win.  That was not in the cards.

By the time Liefooghe stopped with 25 minutes to go for the required driver change, he’d built up a good advantage.  Despite a relatively slow stop, Quinlan still had a 15 second lead over the rest of the field.  What Quinlan wasn’t expecting was Miller in a near-identical BMW being able to run him down at the race of roughly two seconds a lap.

With under 10 minutes to go, Miller caught Quinlan for the lead.  What followed was a multi-lap battle in which Miller tried every place he possibly could to get past.  Finally, Miller was able to get to the inside of Quinlan entering Turn 10 and snatched the lead for good.  From there, Miller pulled away to take the third win of the year for himself and Gottsacker.

Quinlan and Liefooghe ended up 8.368 seconds back in second, followed by Kevin Woods and Chris Bellomo in The Racers Group’s No. 67 Porsche that won the Am class.  Kozarov and Burton were fourth, while Bader and Dennis were fifth.