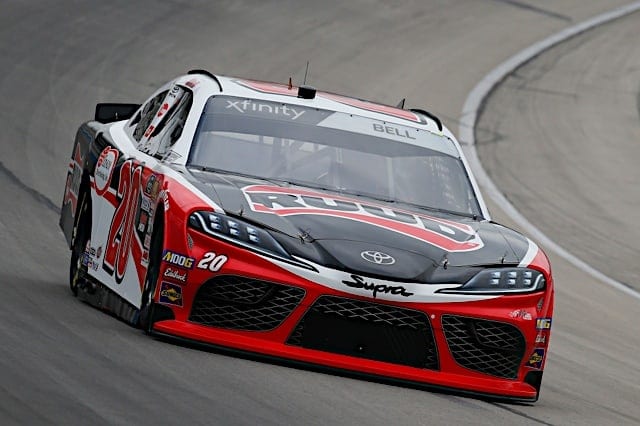 Christopher Bell won the pole for the My Bariatric Solutions 300 at Texas Motor Speedway. It is his eighth career NASCAR Xfinity Series pole. Bell won the pole with a lap at 191.320 mph, the fastest lap of the entire weekend across all three of NASCAR’s National Series..

Starting alongside Bell will be his Joe Gibbs Racing teammate Brandon Jones. Jones missed out on the pole by just over half a tenth of a second, but his No. 19 Toyota had speed as Jones laid down a quick time of 190.968 mph.

Chevrolet drivers Tyler Reddick and Justin Allgaier will start the race in the second row, starting third and fourth respectively.

Two drivers inside the Top 12 are making their Xfinity Series season debuts. Driving the No. 8 JR Motorsports Chevrolet, Jeb Burton will start the My Bariatric Solutions 300 in sixth place. Driving the No. 21 Richard Childress Racing Chevrolet, Kaz Grala impressed during Xfinity Series practice the previous day. Grala followed that up by qualifying 12th for the My Bariatic Solutions 300.

An overnight rainstorm forced NASCAR to alter the qualifying session. Instead of three qualifying rounds, NASCAR made it two rounds, where the top 12 drivers advanced to Round No. 2 to race for the pole.

In Round No. 1, Jones was fastest with a lap at 189.820 mph, two-hundredths of a second faster than JR Motorsports’ Allgaier. Busch was third fastest, then Austin Cindric and John Hunter Nemechek.

Garrett Smithley brought out the red flag during the first session when he spun his No. 0 JD Motorsports with Gary Keller Chevrolet.

Full 360 for @GarrettSmithley at #XfinitySeries qualifying brings out a red flag.

They took the No. 0 to the garage to check it out pic.twitter.com/8fkjJW3fRM

40 drivers were entered for the My Bariatric Solutions 300. Morgan Shepherd and Bayley Currey failed to qualify.