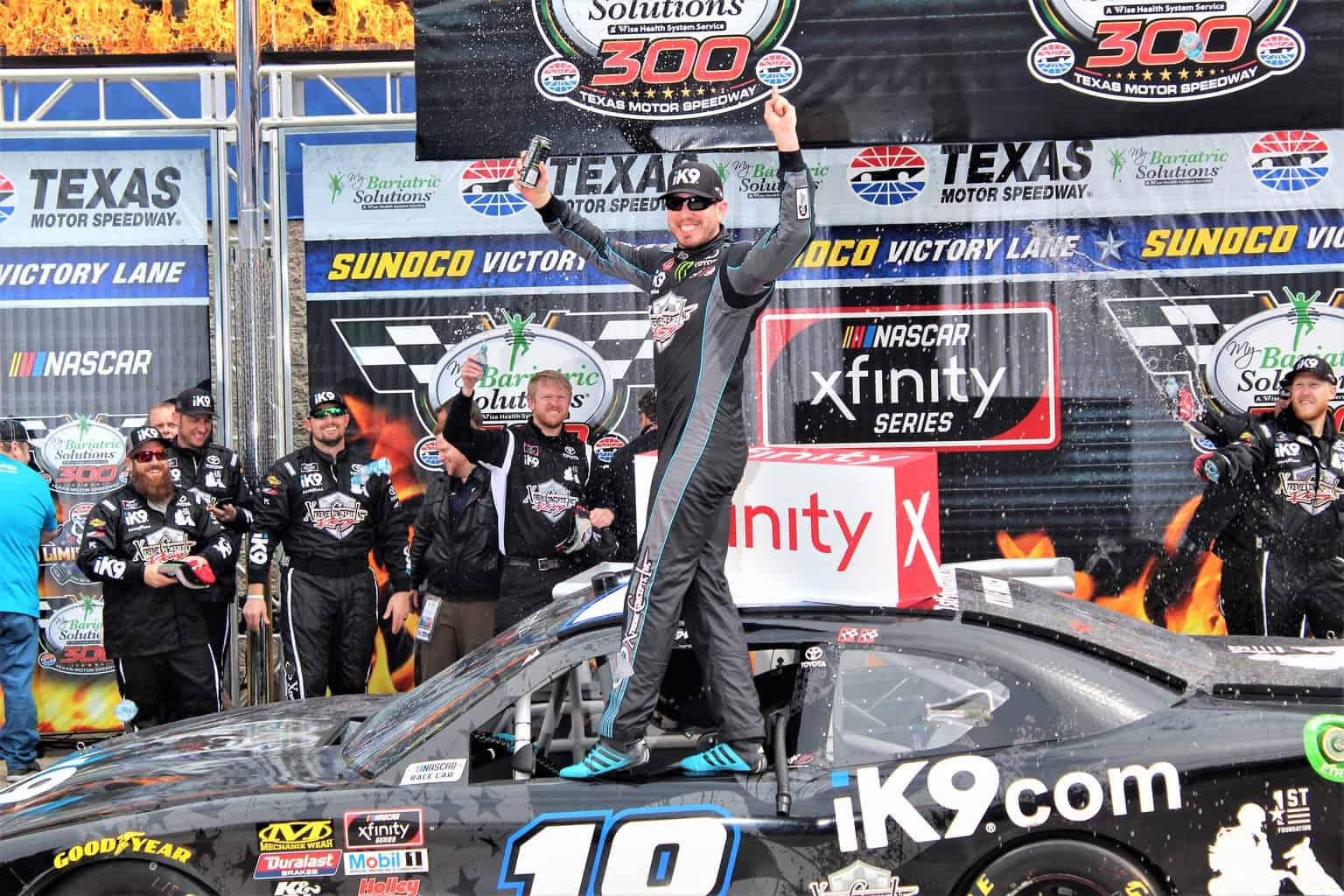 Busch benefitted from a late caution coupled with an excellent pit stop by his No. 18 Joe Gibbs Racing pit crew to restart in first after the last caution. When the green flag flew, Busch aced his restart, sped by with the win with a 0.861-seconds margin over Tyler Reddick. Polesitter Christopher Bell finished third after leading a race-high 127 laps, including all 45 in stage one. Chase Briscoe and Jeb Burton rounded out the top five.

“I’m just really proud of all my Nutri Chomps guys,” Briscoe said. “We were literally a 13th to 14th-place car all day long and just kept working on it and getting track position and was able to salvage a top five out of it.”

Bell started on the pole and dominated the first stage, leading all 45 laps en route to the stage victory. In that stage, Jeremy Clements was the first victim of a loose race car, spinning his No. 51 Jeremy Clements Racing Chevrolet through the frontstretch grass which brought out the only yellow.

YELLOW FLAG: A rough weekend for @JClements51 continues as he goes sideways through the grass on the opening lap at @TXMotorSpeedway. pic.twitter.com/hEKlhhLKQ3

During the stage break, Joe Gibbs Racing teammates Bell and Brandon Jones suffered nearly simultaneous pit road penalties. Bell was busted for speeding, while Jones drove off with the jack wedged under the drivers’ side of the No. 19 Toyota. Both drivers had to restart at the rear of the field.

Adding more wheels will usually help with grip, but we don't think it will in this instance. pic.twitter.com/OxDTaAo9cf

Both drivers recovered from their respective penalties and raced their way back inside the top five before Jones was taken out in an aggressive move by Cole Custer.

“I just got loose under the 19 on that restart,” Custer said after emerging from the infield care center. “You’ve got to push it extremely hard just because it’s so hard to pass.  After a couple laps you just have to try and get what you can get.

“I wasn’t having the best restarts all day, so I tried to be really aggressive there and I just pushed it too hard.  I wish I didn’t push it that hard, but it is what it is.  I hate tearing up our car, but we’ll go and get them at the next one.”

Custer and Jones weren’t the only victims of a loose racecar, though. Earlier, Justin Haley got loose racing around Brad Keselowski and slid up the track, clipping the right rear of Keselowski’s No. 12 Ford. Despite an effort to repair the car, the damage was too significant and Keselowski settled for his second DNF (36th) in as many starts this season.

YELLOW FLAG: The caution flag flies as @keselowski gets into the turn 2 wall. pic.twitter.com/8qKD5DLTVf

With only five laps left in the second stage, all the lead lap cars except Ross Chastain and Ryan Sieg pitted. Their gamble paid off and Sieg took his first stage win of his career.

As stage three wound down, a long green-flag run put fuel strategy in play until Clements ran out of gas on pit road and drew a yellow with just 10 laps remaining. All of the lead-lap cars pitted, though Reddick and Busch took fuel only, while Bell and several others got two fresh tires.

On the following restart, Busch shot out of a cannon and left the rest of the field behind, building a nearly one-second lead before the checkered flag flew over his second win in as many races this weekend.

The Xfinity Series heads to Bristol Motor Speedway next weekend for the first of four Dash 4 Cash races, which also means Monster Energy NASCAR Cup Series drivers are prohibited. Tyler Reddick, Christopher Bell, Chase Briscoe and Michael Annett will compete for a $100,000 bonus in that race.

Ahh…..Nuts! I missed it. If I were you Kyle, I’d keep plucking that low hanging fruit all the way to 300 wins!

More sponsor $$$$ in the bank for Kyle. 33 years old & FORBES lists his net worth at $50 Million. Mars loves seeing their products and giving him money.

I tuned in near the end and was watching because Baby Busch wasn’t going to win until the 51 did exactly what he was in the race to do and brought out a caution for Baby Busch. He better be on Kyle’s Christmas card list.That was one of the most moronic moves I’ve seen in 50 years and I’ve seen a driver at the rear of the field spin out by himself coming out of turn four on a warm-up lap. It sure took a long time for the caution to come out cutting the laps Kyle would have to stay in front after he got the lead after the pit stop. It’s amazing how he can pull away with 70 lap tires from cars that changed four.

Kyle got very lucky on this win. I also thought that was a very long caution flag for nothing to clean up.
I saw an Indy car spin out from the pole on the warm up laps before the start of the race.

Kyle beating up on the truck/xfinity guys is about as impressive as Barry Bonds winning a little league home run derby. There comes a point when an athlete competing against lesser talent with superior equipment becomes crass.

You guys need to bite the bullet and root for Kyle to win 5 more Xfinity races. Didn’t he say he’d bow out once he had 100 wins?