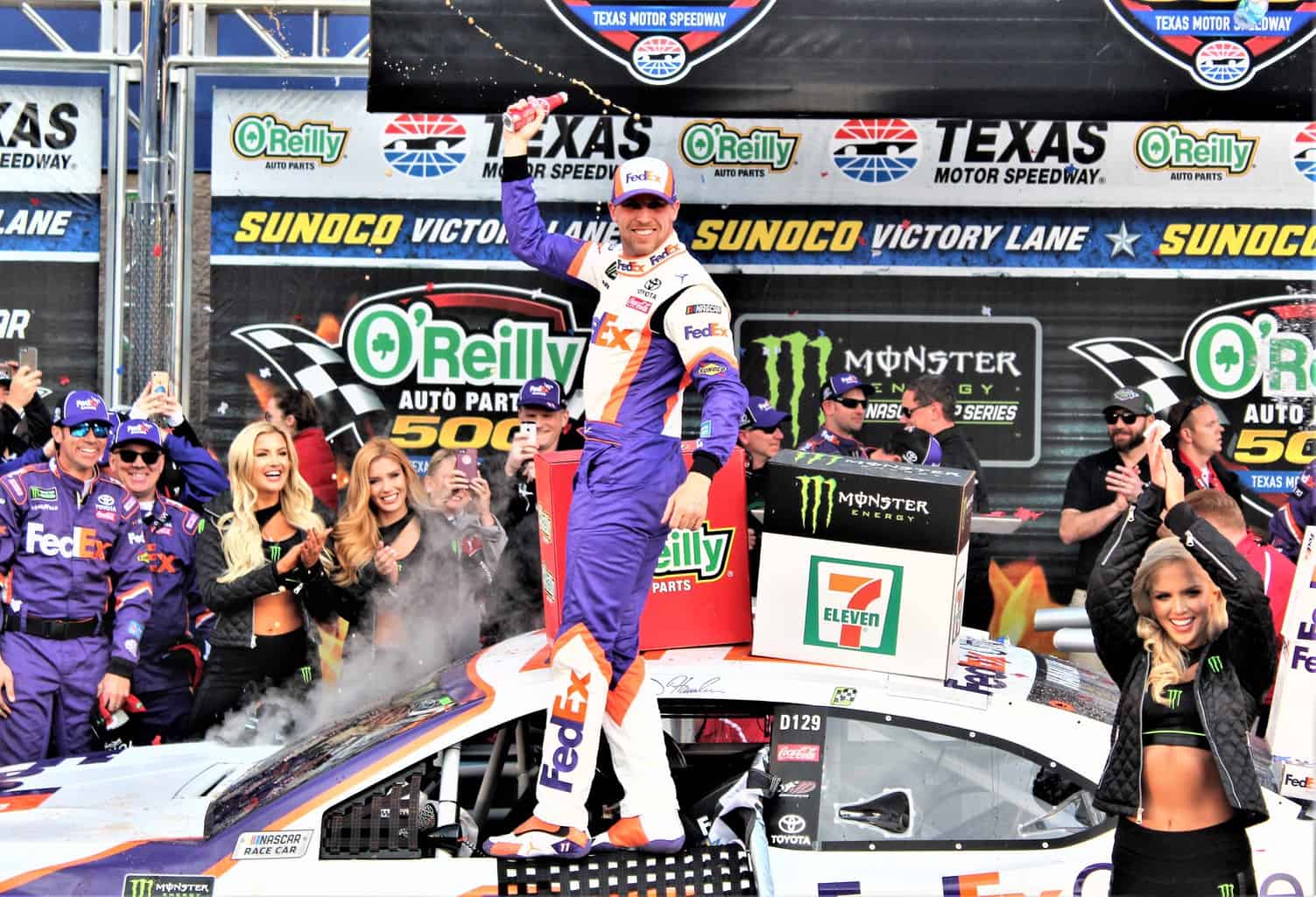 Hamlin took control after the final pit stops at Texas Motor Speedway and cruised to a 2.7-second victory over Clint Bowyer. The No. 11 FedEx Toyota crew took no tires on a flawless final stop and Hamlin jumped out ahead in clean air after teammate Kyle Busch broke loose earlier in the last green-flag run to the finish.

Busch’s No. 18 Toyota appeared to be in position for another weekend sweep. But Busch lost control of the car entering Turn 1, forcing him up the racetrack and out of the lead with less than 60 laps left.

Busch recovered and started tracking the leaders back down from fourth place. But he pushed too hard, hitting the wall this time off Turn 2 and requiring an unscheduled green-flag stop for right side tires.

“It just broke loose,” Busch said. “I had to catch it and make sure we didn’t crash. Got back in line, got rolling, had to chase it off Turn 2 and knocked the fence down.”

Busch would end the day in 10th place. That opened the door for Hamlin, who outgunned teammate Erik Jones during the final round of green-flag stops. It was a perfect pit road finale for a team that stumbled through the afternoon. Hamlin missed pit road entry, ran out of fuel, got busted for pit road speeding and then suffered through an uncontrolled tire violation under caution.

He won stage two despite some of that mess; moments later, the No. 11 dropped outside the top 10 after the tire penalty. But the team stayed calm, new crew chief Chris Gabehart kept his driver focused and Hamlin rallied.

“Our car was really, really fast,” Hamlin said. “Once we got out front, we were able to pull away from the pack. We tried every way we could to give it away and we still found a way to do it with this FedEx Camry.”

The stage two winner has now won the last five MENCS races.  Bowyer made a late charge to second but ultimately came up short while teammate Daniel Suarez ran a strong third.

“We’ve been working very hard to try and make the race cars better,” Suarez said. “This car was fast the entire weekend. Hopefully, we can keep heading in the right direction and get it to Victory Lane one day soon.”

Jones ran fourth, recovering from a spin that brought out the race’s first caution. It was the third straight fourth-place finish for him at TMS, a late-race disappointment after Busch’s bobble gave him the lead at one point.

“Spinning out on lap 15 isn’t the way to start your day,” Jones said. “We had to dig out of a hole from there. You can’t complain much when it’s your fault.”

Jimmie Johnson finished fifth, his best effort since the Coca-Cola 600 in May 2018. Three of Hendrick Motorsports’ four cars ran 13th or better and led the race for long stretches.

“It’s great to be back in the mix,” Johnson said. “That’s where this team deserves to be. I hope everybody at Hendrick Motorsports is smiling big. To have all four cars with such pace, it’s a big step in the right direction for us.”

It was an eventful day at TMS with comers and goers, easily the best 1.5-mile race under NASCAR’s new, low-horsepower package. Mechanical gremlins also crept up unexpectedly for one of the sport’s top teams. Team Penske’s Ryan Blaney blew an engine while leading, Brad Keselowski spent time behind the wall and Joey Logano’s hood bracing caved in. It was the first time all year none of the Team Penske cars wound up inside the top 15.

I really wanted to see KB sweep at Texas Motor Speedway. That is a lot of laps to race almost wide open the whole time. It is something that didn’t happen back in the day and will not happen in the future.
Did Denny Hamlin say “All we do is win” while doing that obnoxious burnout?
I wonder what Joe Gibbs says in those post race prayer huddles. Is it the same prayer no matter which driver wins?

He’s thanking NA$CAR for changing the rule changes to bring the Chevs and Toys back to the Fords. And he gives the fifteen per cent tithe to the Reverend Joe Church of the Entitled.