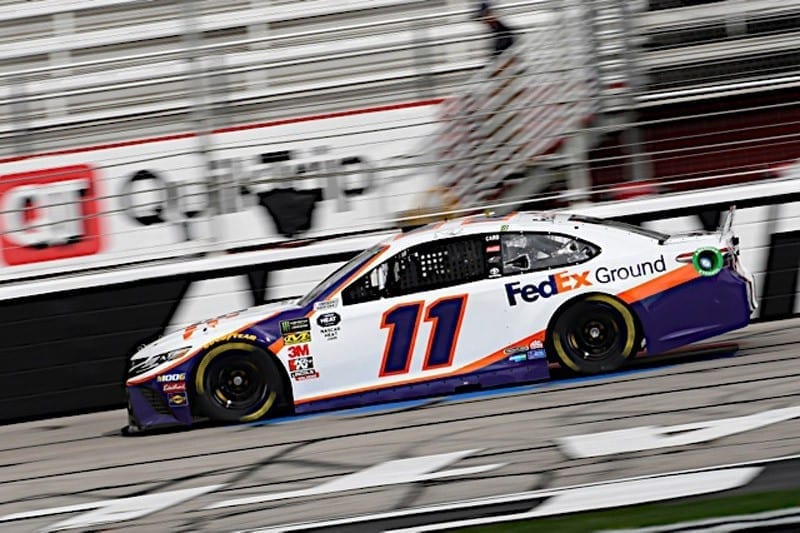 It was Homestead-Miami Speedway, the site of the 2018 championship finale and Denny Hamlin was clearly upset. The main storyline centered around whether he’d help title contender Kyle Busch with pit stall selection after winning the pole. But you could tell, from the second he spoke, Hamlin’s mind was elsewhere. Every word came heavy, emotional as he knew his time with close friend and crew chief Mike Wheeler was nearing an end.

“He’s super smart, a great friend of mine,” Hamlin said of a man he thought would hold that job the rest of his career. “The spot was always his. I’m not afraid to go in his office or hash it out with him at any point.  You have that kind of relationship that you feel like you can tell him anything, and so that really means a lot, and it goes a long way.”

But the braintrust over at Joe Gibbs Racing, watching Hamlin endure the first winless season of his Monster Energy NASCAR Cup Series career in 2017 had felt the partnership ran its course. A driver who lives and dies with emotion, Hamlin’s confidence was killed that September with a late-race caution while leading the regular season-ending Brickyard 400. The race slipped away, right into Brad Keselowski’s hands and a first round postseason knockout ensued. That was unacceptable at JGR, especially when teammate Kyle Busch is busy winning pretty much every race he enters.

So Wheels was out. Enter Chris Gabehart, a 37-year-old with next-to-no MENCS crew chief experience. His coup-de-grace was a five-win, six-pole effort with a merry-go-round of drivers in the 2017 NASCAR Xfinity Series. But Gabehart had just gone winless himself in a 2018 NXS campaign with Brandon Jones. Add in Hamlin’s feelings of loss and you felt like 2019 was a wild card for the both of them.

But boy, did JGR know exactly what road they were taking. Hamlin has followed up a season-opening Daytona 500 win with a second Sunday (March 31) at Texas Motor Speedway. It’s the first time in a 14-year career he’s won two of the first seven MENCS races. Gabehart, in both cases, played a huge role; at TMS Sunday, his call for no tires on the final pit stop put the team out front in position to win.

Besides those victories, Hamlin’s the only driver with top-10 starts in every race this season. His average finish of 5.7 is by far a career best, leaving him second in points and in the MENCS to… who else? Kyle Busch.

But if November was a career low for the 38-year-old Virginian, boy has the healing come quick. And the crazy part is they accomplished Sunday’s feat with multiple obstacles stacked against them. Twice, there were penalties (uncontrolled tire, pit road speeding) that cost the No. 11 track position. Hamlin struggled to come down pit road twice more under green, running out of fuel in one case.

“What’s neat about the year for me, I think Denny would tell you the same, every race thus far I can point to key scenarios in the race that had we fixed that, we would have finished better than we finished,” Gabehart said. “We haven’t optimized our races yet.  That’s encouraging now.”

It’s also noticeable to see Hamlin, a driver bitten by emotion throughout his career, acting like a man on a mission. His best streaks on tour have come when he’s been confident, loose and focused.

“The cars are driving, in my mind, better and better each week for me,” he said Sunday. “That’s coming from Chris, the feedback I give him, he makes adjustments, we get better.

“He told me this morning that he was optimistic we had a race-winning car.  I’ll be honest with you, I thought he was full of sh*t.  I thought we really struggled with the balance of the car all weekend.  It was not a good Friday for us, except for qualifying, where we tremendously overachieved.

This duo is surprising a whole lot of other people as well. In a year where Team Penske and JGR appear a step ahead of the pack, Hamlin is asserting himself early as a dark horse for that elusive MENCS title. – Tom Bowles

Kyle Busch may not have dominated like his other two NASCAR Xfinity Series wins this season. But Saturday (March 30), he was still victorious at Texas Motor Speedway for a record ninth time in his NXS career.

It all came down to late-race pit strategy. With 10 laps remaining, Jeremy Clements stalled on pit road by running out of fuel. That forced NASCAR to throw a caution, throwing a break to the likes of Busch, Christopher Bell, Tyler Reddick and others up front. All of them would have had to make green flag pit stops in the final 10 laps because they were low on fuel.

Ultimately, Busch and Reddick took gas only under caution. On the restart, the No. 18 car got the jump, cruising from there to the checkered flag. It was a missed opportunity for Reddick and Bell, both of whom had outgunned Busch much of the race.

Reddick finished second, his fourth top-five finish of the season. Bell placed third, while Chase Briscoe and Jeb Burton, who was making his first Xfinity start since Chicagoland last June, rounded out the top five.

Some of the sport’s lesser names also had themselves a big weekend. Michael Annett finished sixth, his fourth top-10 finish in six races this season. In 2018, he had just three the entire year. Jeffrey Earnhardt left Texas with an eighth-place finish for Xtreme Concepts Racing, a team making its NASCAR debut. Meanwhile, Ryan Sieg rounded out the top 10, his fourth such finish this season, a new career best. Sieg also won a stage for the first time in his NASCAR career. – Dustin Albino

Another race, another win for Kyle Busch. He scored his fourth win in as many 2019 Gander Outdoors Truck Series starts Friday night at Texas Motor Speedway. Meanwhile, Brett Moffitt saw a possible win slip from his grasp when he got loose racing three wide and suffered a flat tire following contact with Ben Rhodes.

The Truck Series now heads into a quiet period where it spends the entire month of April off. Drivers will be back on track during the first weekend of May at Dover International Speedway.

Stewart Friesen, who finished runner-up in Texas and mounted a serious charge at Busch in the closing laps, heads into this extended break with the point lead over Grant Enfinger. His ThorSport Racing teammates Rhodes and Johnny Sauter sit third and fourth, respectively. Defending series champion Moffitt rounds out the top five.

Saturday saw a field of only 20 cars take the green for the third running of the California 8 Hours.  While JAS Motorsport’s Acura NSX GT3 Evo started on pole, it was the lone Ferrari in the race, fielded by HubAuto Corsa, that dominated proceedings.  The team of Nick Foster, Miguel Molina and V8 Supercars veteran Tim Slade moved up into the lead in the early going and had a near-perfect run to victory.

The win was somewhat surprising as Taiwan-based HubAuto Corsa has been racing less than two years.  The team (and all three of their drivers) had never been to WeatherTech Raceway Laguna Seca prior to last weekend.  Meanwhile, their opposition had raced there for the past couple of years and are considered to be the best GT3 teams on the planet.

The race, which served as the second round of the five-race Intercontinental GT Challenge, was one of the cleanest endurance races in recent memory.  The race ran caution free for the full eight hours, resulting in a new distance record of 327 laps (731.826 miles).  There was only one real on-track incident of note.  That was when Audi Sport Team Land’s Markus Winkelhock was spun out in the Corkscrew by BMW’s Chaz Mostert.  Winkelhock was able to continue while Mostert was given a drive-through penalty for causing the incident.

In the small GT4 class, PF Racing’s Ford Mustang GT4 shared by Jade Buford, Chad McCumbee and James Pesek effectively led flag-to-flag to win by seven laps.  As compared to the GT4 West races on Friday, the team had a substantial pace advantage over anyone else in those events.  Their best lap was more than a second faster than any of the GT4 West teams. – Phil Allaway

In the past five years, as Lewis Hamilton has amassed an incredible number of wins and totaled four championships, he’s won in a number of different ways.  In Bahrain on Sunday, Hamilton won by being lucky (not that it’s the first time he’s done so).

At first, the race looked to be covered by Ferrari. Second-year driver and team newcomer Charles Leclerc rebounded from a tough opening lap to settle pleasantly in first.  Leclerc had opened up a gap of nine seconds on second-place driver and teammate, Sebastian Vettel, and faced little challenge.

Hamilton was cruising in third, having used a different pit strategy than Vettel to provide some kind of challenge to the faster car.  After finally getting ahead of Vettel, he seemed destined for the runner-up spot.  The MGU-K system on Leclerc’s Ferrari had other ideas, however, and he could no longer maintain his pace.  With nine laps to go, Hamilton passed Leclerc at the final turn to take the lead.

From there, Hamilton enjoyed a quiet drive home for the win.  Mercedes teammate Valtteri Bottas, who had endured a mediocre race, managed to speed past the limping Leclerc with four laps remaining and finished second.  Leclerc, for all his efforts and for what had looked like a brilliant drive, took the final spot on the podium by holding off the Red Bull of Max Verstappen.

The series resumes in two weeks in China with Hamilton and Bottas atop the standings.  – Ava Ladner