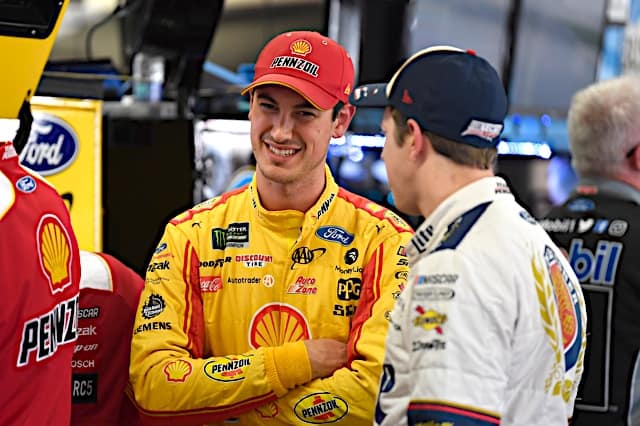 Team Penske has been one of the two dominant NASCAR teams of 2019. They’ve snagged three wins in the first six races, including last weekend at Martinsville Speedway. But once the Monster Energy NASCAR Cup Series hit Texas Motor Speedway for the O’Reilly Auto Parts 500, that changed.

Joey Logano was the highest-qualifying driver in eighth, while Brad Keselowski and Ryan Blaney started 12th and 13th, respectively. Fast forward to race day and it went downhill for the organization rather rapidly.

Keselowski was the first one sidelined with a mechanical issue during stage two.

“Something broke out of nowhere,” he explained while the team worked on the car in the garage. “We weren’t going very fast or anything and something in the back of the car broke and it won’t go. It’s one of those really important parts, as Kenny Schrader would say.”

Following a lengthy stay in the garage, Keselowski did get the No. 2 Miller Lite Ford back on track. But he ended the race in 36th, 55 laps down.

Out of contention but not out of the race. @keselowski is headed back out on track. #NASCAR #OReilly500 pic.twitter.com/bUBCsX9o6i

Fast forward to lap 225, well into the final stage, and Blaney suffered an engine failure while leading the race. He retired in 37th after white smoke puffed out of the tailpipe.

This isn't a good sign for @blaney. He led earlier and now his car sits in the garage. #NASCAR #OReilly500 pic.twitter.com/XY6MdrjssD

“A part broke off and leaked all the water out, so that’s the way it goes,” Blaney said. “It just seems that’s the way this season is going. We’ve had a shot to win pretty much every race and something happens. That’s getting old, but the car is fast. That’s the bright side, but I’m kind of tired of looking at the bright side. I want to actually start finishing where we should. It’s just one of those days.”

Meanwhile, Logano was hit with an uncontrolled tire penalty late in stage two before an even more bizarre incident happened with his hood that allowed it to flex as the air flowed under the car.

The bracing underneath Joey Logano's hood appears to have come loose.

Look at how it causes the hood to flex. #NASCAR #OReilly500 pic.twitter.com/mxgzHZZHgc

“Something came apart in the bracing underneath the hood, I believe, and then the hood started flaring all over the place,” Logano said, not sure of what caused the problem. “The hood was gonna blow off the car if we didn’t get a caution, so we were able to fix it but went down a lap and there weren’t enough cautions to ever get the Lucky Dog.  We rode around in the Lucky Dog spot for a while, but never got that.

“That really altered the handling once we had all the bearer bond on the front. The car got really draggy and got real tight, but we won a stage. I was proud of the speed that was in the car. Our car was capable of winning the race but didn’t have the opportunity to take advantage of it.”

Logano wound up 17th, his second straight finish outside the top 15. Combined, the average finish of 30.0 was easily the worst for Team Penske at any race this year. It’s the first race of 2019 no one in this trio ran inside the top 10.

Yuppers~ Team Penske this weekend produced nothing but big turds.

it wasn’t their weekend to win. gibbs’ check cleared so his teams got the nod.

Has the rules changed this year for car repairs during a race? I haven’t heard anything from that ice cream eating crack crew in the booth.

Robert B
Reply to  Tom B

I assume the 5 minute clock to repair crash damage is still in effect.
Mechanical repairs in the garage like Kesolowski’s don’t have a time limit.