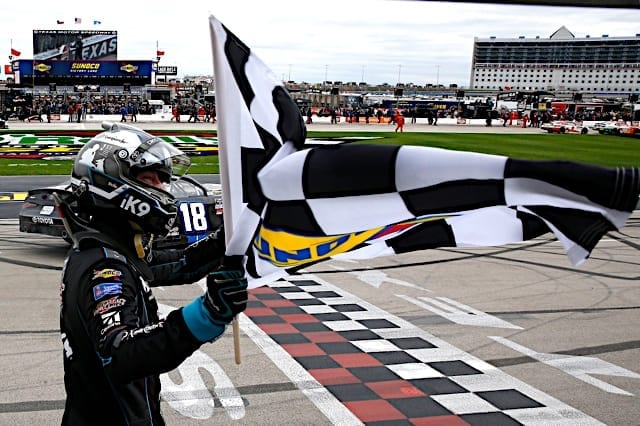 Through the early weeks of the 2019 NASCAR season, Kyle Busch looked like an unstoppable force of nature.  In the Monster Energy NASCAR Cup Series, Busch collected finishes of sixth or better in every single start through the first six contests.

Those races include two wins, one of which was Busch’s much-hyped 200th across NASCAR’s three national divisions.  And speaking of the Xfinity and Gander Outdoors Truck Series, he’s been to Victory Lane three times in four Xfinity starts. Trucks is even better: Busch remains undefeated there this year through four starts.

However, Sunday’s (March 31) Cup race at Texas Motor Speedway was a reminder that Busch is, in fact, human.  On lap 276 of 334, the No. 18 team appeared to have the race in hand save for a final round of pit stops.  But while leading, he bobbled in Turn 2, losing all his momentum and the lead to Erik Jones.

A few laps later, while trying to make up ground, Busch popped the wall at the exit of Turn 2.  He had to bring his Toyota to the pits immediately for new tires and damage repair.  That extra time spent in the pits erased any hope of Busch winning the race.  Although he was able to reach the finish without another pit stop, the race’s other contenders pitted much later for just two tires or only a splash of fuel.  Busch never made up the difference, finishing 10th after looking like a good bet to win.

“It just busted loose on me,” Busch said of the first incident.  “And I had to catch it and make sure we didn’t crash.  So, first and foremost, we did that. Then I got back in line, got rolling, started gaining back on those guys in front of us, and the looseness was still there.  And then I had to chase it on exit of (Turn) 2 one time behind the [No.] 10 (of Aric Almirola) and just knocked the fence down.”

It was shocking to see Busch make such a critical mistake, especially given how he won the Truck and Xfinity races earlier in the weekend. He entered Sunday riding high.

In Friday night’s Truck Series event, Busch and Brett Moffitt had the trucks to beat. With 20 laps to go, Busch, Moffitt, Stewart Friesen and Ben Rhodes were all mixing it up for the lead.  Running behind Busch and Friesen, Moffitt got squirrelly going down the frontstretch, checked up, and got hit from behind by Rhodes.  The contact between Moffitt and Rhodes took them both out of contention.  Busch would then hold off Friesen in the closing laps and take the checkered flag.

In the Xfinity Series race, Busch’s hopes of winning looked bleak with 15 laps to go.  He was in third place and not gaining any ground on leader Christopher Bell or Tyler Reddick.  Even if Busch caught the leaders, it would not have mattered much as he, Bell, and Reddick all had to pit once more.  Several drivers, including Chase Briscoe, Kaz Grala and Jeffrey Earnhardt, were attempting to stretch their fuel supplies to the finish.  Busch looked beaten either way.

But a lap 190 caution for Jeremy Clements’ stalled car on pit road set up a whole new ending for the race.  Busch won the battle off pit road with a fuel only stop and left everyone else in the dust on the final restart.

Busch spent all weekend doing what good racers do – taking advantage of other drivers’ mistakes.  He might have won Friday with or without Moffitt’s mishap. However, not having to deal with the defending champion of the Truck Series certainly made his path to victory easier.

The Xfinity race was a clear case of Busch making the most of an opportunity he never would have had without Clements stalling in the pits.  When presented with an opportunity to win, Busch came through.

Sunday was a totally different story.  Getting loose while leading, then making the situation worse by hitting the wall, allowed eventual winner Denny Hamlin to take advantage of Busch’s mistake.  Hamlin was a bit of a surprise winner, because he was not perfect on Sunday either.  First, he missed pit road during a green flag pit cycle.  Then, he sped on pit road later in the race.

Finally, on a third stop, the No. 11 team was one of several to get hit with an uncontrolled tire penalty, forcing Hamlin to the end of the line for the ensuing restart.  As a result of those missteps, he spent a lot of the race having to march through the field.  Fortunately for Hamlin, he and his team were mistake-free when it mattered most.

BOWLES: NEW CREW CHIEF PAYING OFF FOR HAMLIN AFTER MISERABLE 2018

In fact, Sunday’s race had some challenging moments for a lot of drivers, even some who finished well.  Jones spun out early in the race and did a superb job rallying back for a top-five finish.  Kevin Harvick also had an uncontrolled tire violation but rebounded for a top 10.  Kurt Busch scored a solid result despite having a tire beginning to wind apart during a long run.

On the other hand, some mistakes and mishaps proved disastrous to others.  Joey Logano couldn’t recover from both another uncontrolled tire penalty and a weird incident where his hood was buffeting upward in the draft.  Daniel Hemric’s rotten luck with tire failures continued.  Kyle Larson crashed during the second stage and Brad Keselowski dropped out of contention early with a parts failure.  Ryan Blaney may have suffered the toughest loss of all, leading 45 laps before his engine blew with just over 100 laps to go.

Yet Busch’s error seems more surprising than any other incident Sunday.  Maybe that’s because it happened so close to the end of the race.  Maybe it’s because it cost him a sweep of the weekend.

Or maybe it’s because Busch spends so much of his time making NASCAR look easy for him.  Prior to Sunday’s race, Busch had an average finish of 2.7 in MENCS competition.  Even early in the season, that’s a remarkable accomplishment through six races.  Furthermore, after his 10th-place result, it’s still an impressive 3.7.

Sunday’s not the first time Busch has made a mistake, and it will not be the last.  But his whole race weekend at Texas proves that not every driver, even a very good one, is going to catch all the breaks every time.  That is a good thing; racing in NASCAR is supposed to be difficult.

Mistakes are an indication to fans drivers are pushing themselves and their cars to the very edge of control.  And for the first time this year, Busch got that reminder.

Kyle has been making “mistakes” for a long time and usually blames everybody else. It must have been a crew member who over drove the car AGAIN and heard the song “Hello Wall” on the radio. AGAIN!