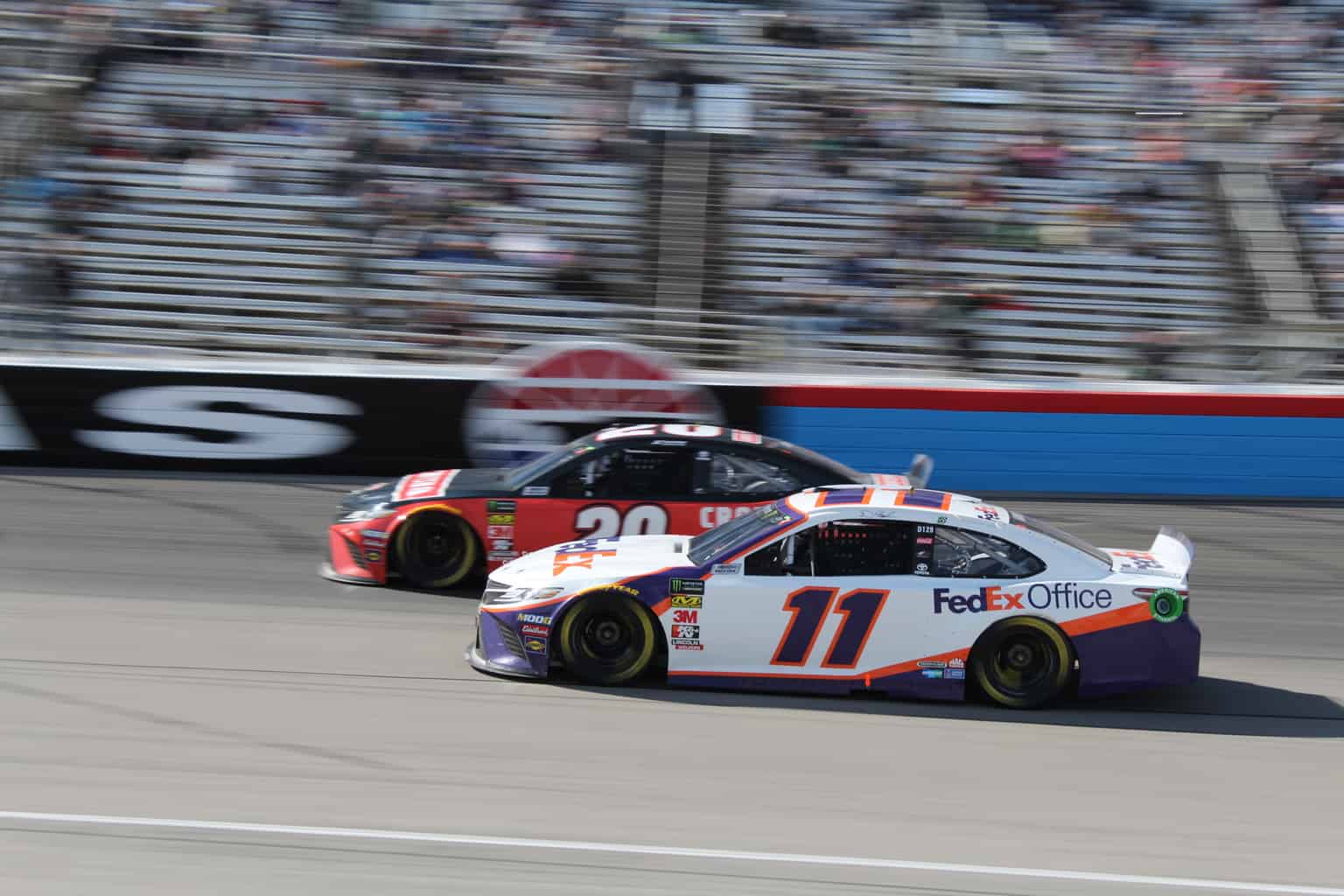 It was a weekend for resiliency in the Monster Energy NASCAR Cup Series at Texas Motor Speedway during the O’Reilly Auto Parts 500 this Sunday (March 31).

Numerous drivers overcame trouble to post finishes which range from decent to excellent, depending on their team’s standards and expectations.

Denny Hamlin overcame a speeding penalty and another pit-road violation to claim his second victory of the year. His Joe Gibbs Racing teammate, Erik Jones, recovered from an early spin to finish fourth. Aric Almirola finished seventh despite driving with the flu. Kyle Busch smacked the wall late, getting trapped a lap down while fixing the damage, and still recovered score his seventh top-10 finish of the season.

After their less-than-stellar opening to 2019, Hendrick Motorsports bounced back with a solid performance by its quartet, as Jimmie Johnson scored the pole and led 60 laps before finishing fifth. William Byron was right behind in sixth after qualifying second, and Chase Elliott was in the mix for some time as well, though the finishing order didn’t quite reflect it.

Hamlin is very quietly putting together a fantastic opening to the season, with two wins, four top fives, and a worst finish of 11th. He might be a second title contender for the Toyota stable alongside Busch. Hamlin is currently second in points, eight points behind his teammate.

Kyle Larson‘s Chip Ganassi Racing Camaro finished in last place for the No. 42 after it became a smoking mess on lap 150. After being the only Chevrolet driver in contention for wins much of last season, those results aren’t quite there in 2019. His best finishes are sixth and seventh at ISM Raceway and Daytona, respectively, and he’s averaging a 15th-place finish. That’s firmly in the invisible category as far as the TV networks go, and he’s 12th in the standings right now, with about a half-race cushion on the playoff cutline.

Texas just doesn’t agree with Larson. In 12 starts there, he has four DNFs and an average finish of 20th.

Kurt Busch is maybe Chevrolet’s top driver right now, with a worst finish of 12th if you don’t count a crash-induced 25th during the Daytona 500. That includes two top fives in that span as well for the driver of the No. 1. The elder Busch is currently well within playoff contention in 10th, with over a full race’s cushion on the cutline.

It was a terrible weekend for Team Penske. Brad Keselowski had a problem when something broke in the back end, trapping him well over 50 laps down in 36th, though he was able to return and finish the race. This came after he crashed out of the Xfinity race on Saturday. Ryan Blaney was leading the race in stage three when his engine apparently gave out, slapping him with a 37th-place result. Joey Logano was in contention until a loose hood derailed his day, saddling him with a ho-hum finish (17th) for the second week in a row.

Even alliance teammate Paul Menard wasn’t immune – he was running third when he was sidelined by a loose wheel, meaning the No. 21 finished 19th.

Daniel Suarez is slowly but surely finding his footing at new home Stewart-Haas Racing. Through seven races, the No. 41 has found the top 10 three times, with 10th-place runs at Atlanta Motor Speedway, last week at Martinsville Speedway and third on Sunday in Texas. His 15.6 average finish doesn’t sound great, but it’s the best average of his Cup career, and the third-best average of his full-time NASCAR career after his Xfinity championship in 2016 (8.0) and his NXS rookie year in 2015 (11.7). He’s also currently in playoff position at 14th in the standings.

Matt DiBenedetto‘s No. 95 Toyota lost its power steering at some point through the event, which meant the Leavine Family Racing driver could only muster a 26th-place finish. He’s seemingly had mechanical woes or bad luck every week so far this season, which means his best result was 18th at Auto Club Speedway.

We’re dipping down into the Xfinity Series on this one with the No. 19 Toyota Supra of Brandon Jones. It was a tribute to Joe Gibbs Racing co-founder and team president JD Gibbs, who passed away during the offseason. It was a very classy tribute, which is why it earns this spot this week.

Also, the dominant maroon and gray colors worked surprisingly well on a race car, with trim in black and white. Those dominant colors are very hit-or-miss when it comes to sports uniforms, and what looks great on the football field or hockey rink doesn’t necessarily translate onto the racetrack. But this worked.

Corey LaJoie has a not-terrible idea for how to fix qualifying. It worked for generations when solving disputes during backyard sports events and could potentially work as a way of getting an element of the throwback to stock car racing that some fans are clamoring for.

Can we just have a bracket of ROCK PAPER SCISSORS to see where we start the race on Sunday?

DiBenedetto was able to put a good face on his exhausting day. And Bristol Motor Speedway is coming up, which is one of his best tracks.

No power steering…I would prefer to never do that again. Thank goodness I lift things up and put them down a lot #armsonfire

The MENCS and Xfinity Series make their first trip to Thunder Valley and Bristol Motor Speedway this weekend.

In Xfinity, someone not named Kyle Busch will win this week, because he’s off from driving the No. 18 Supra until Watkins Glen (August 3). I’m going to say that Christopher Bell will take the checkered flag on Saturday in the Alsco 300 (1 p.m. ET on Fox Sports 1).

On Sunday, Kyle Busch will get his eighth win at the Last Great Colosseum, and fans will complain on Twitter about a short track race being on cable.