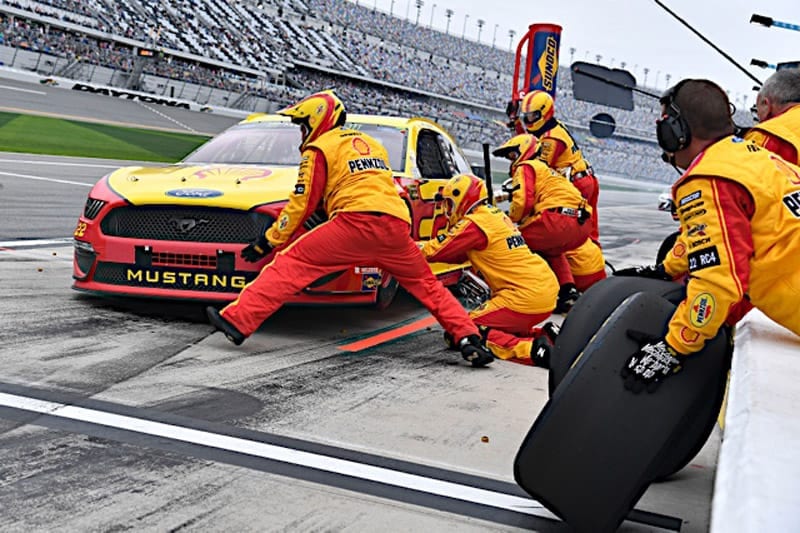 Last season, there was much debate about who the best team in NASCAR was. This season, it is safe to say there are two frontrunners, with Joe Gibbs Racing and Team Penske. The two teams have combined to win the first seven races of the Monster Energy NASCAR Cup Series season.

There have been other teams have challenged but nobody has been able to take the reigns quite like JGR and Team Penske.

With that said, who is the best of the rest right now? Which team could break through as soon as this weekend at Bristol Motor Speedway?

Even as two teams run away from the rest of the field, no one is immune to the one thing that can level the playing field in an instant: a pit road penalty. NASCAR has been very strict with pit road penalties this season, specifically with regard to the uncontrolled tire and the “too many men over the wall” rule. There has been some controversy as to what consists of a penalty and what doesn’t, with NASCAR being called into question for their inconsistency.

What should NASCAR do about these penalties? Should the sanctioning body alter them or ease up? Are they fine as is, or do we need a complete overhaul of pit road rules?

Q: With Team Penske and Joe Gibbs Racing being the top two teams so far this season, who is the best of the rest right now? Carl C., Goldsboro, NC

A: Right now, Stewart-Haas Racing seems to be the best of the rest, and the closest team to breaking that Team Penske and Joe Gibbs Racing winning streak. All four SHR  cars are usually hovering in or around the top 10, if not challenging for the lead.

This past weekend, the organization placed all four cars inside the top 10 with Clint Bowyer scoring a runner up finish. Daniel Suarez somewhat unexpectedly finished a season-best third and led some laps as well.

The one driver who I have been a little disappointed with Kevin Harvick. His No. 4 team definitely has not had the speed it did last season when it dominated the first two months and won three of the first seven races.

Harvick has led laps and had chances to win but has not been in the right position yet. I don’t doubt for a second that he will make it to Victory Lane this season but it certainly didn’t happen quite as early as often as some expected.

The Ford Racing camp is definitely strong as a whole, even with the new Mustang body. Specifically, all of the Team Penske and SHR cars have a chance to win on a regular basis. I am not saying all four cars will definitely make a trip to Victory Lane this season as they did last, but it would not surprise me.

The Gibbs/Penske streak will end, and it could very well happen at Bristol. Harvick and Bowyer in particular are both very strong there. However, do not count out the other two drivers, Aric Almirola and Suarez.

Almirola has been the king of consistency to start out the season and I do not expect that to change. I expect him to break through one of these weeks and find victory lane. I also expect that Suarez will win his first race this season. Going into the year, I was questioned whether or not he could win in his first season with SHR, but seeing how he is improving with that team every week, I believe it’s a matter of when, not if.

If Stewart-Haas can get its four cars in Victory Lane in 2019, that would be a huge accomplishment. They could certainly take over as the sport’s top team once again as they continue to get results. Wins will come for all four of their drivers, and I expect that to start very soon.

Q: What do you think should be done about the too many men over the wall and the other pit road penalties as well? Is NASCAR too touchy when it comes to that or are they fair as is? Michael R., Stamford, CT

A: This has been a penalty in the sport for so many years and it was altered this year to the point where everybody seems confused as to what is a penalty and what is not. Altering it has only created more confusion because many of the penalties this season have been for very minor violations, ones that would not have even been a penalty in years past.

NASCAR is cracking down like never before to make sure nobody gains any sort of advantage in the pits. When you think about it though, there really is not much to be gained with some of these penalties we have seen this season. If somebody has their hand touching the ground over the pit wall, that is a penalty this year. Where is that advantage? Answer: there is none.

I understand where NASCAR is coming from but many of these teams are extremely frustrated when receiving a penalty that they consider questionable. Not only do they lose valuable track position, but the action deemed to be in violation is so minor that it has become one of the most confusing and worst rules the sport has right now.

Sometimes in sports, less is more, and the fewer rules, the better, and that’s a mindset that could be beneficial to NASCAR. The devil, they say, is in the details and choosing not to call penalties on the minutiae of pit road but rather focusing on the spirit of the rule itself (a phrase NASCAR has used in the past) is in the sport’s best interest.

Penalties such as speeding on pit road should never go away, as these rules are put in place for safety reasons, and rightfully so. Pitting outside of the box, driving through too many stalls, leaving loose lugnuts, etc., are all fair and should remain in place.

Let’s just not allow the enforcement of these rules to get so far off track that penalties are being called for situations that the rule was never put in place for to begin with.

Perhaps adjustments will be made for the overhaul that it sounds like the sport is due for in 2020 or 2021. For the health of the sport, I certainly hope so.

I completely agree with you on the pit road penalties. Overkill! Less is more is right. A tire can be in the pit box, but if it’s more than an arms reach away, which is a subjective call, it’s a penalty. As long as the tire stays in the pit box, there shouldn’t be a penalty. In a Truck race last season, Stewart Friesen’s gasman gave the truck a push as Friesen pulled away. NASCAR called that a penalty. What was the advantage? Doesn’t NASCAR want teams to give it 100%? To boot, even when NASCAR admits they made a mistake, it’s generally too late. So do the recipients of that misbegotten penalty receive anything? If they’re lucky, NASCAR apologizes

Yup too many penalties that are to no one’s advantage. Penalties should only be given for safety violations only. Then those penalties should be served as drive thru after the first completed green flag lap. That makes it a task penalty. Going to longest line is useless and does not penalize anyone. If it is aback marker that car is already there and if it is one of the guys that usually run up front those drivers are back in top 10 in only couple of laps. Look at hamlin this past weekend. A green flag drive thru would have given him a real penalty that he would have really had to race to gain places. Make a penalty mean something

NASCAR ‘s micromanagement of so many areas of today’s racing has contributed big time to the absolute boredom of racing today. Cookie cutter cars, tracks, segments, playoffs
and on and on it goes.