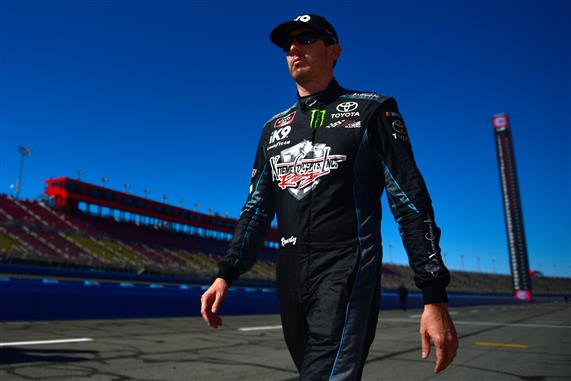 After a rough and tumble day, Texas winner Denny Hamlin has shown that Kyle Busch is not the only Joe Gibbs Racing driver that can win races. Although it is a long way out, can Hamlin be a championship threat?

All three Team Penske drivers encountered trouble in the Lone Star State. Can Brad Keselowski, Joey Logano and Ryan Blaney climb back on their horses and lasso back their winning ways, or will lady luck continue to deal the trio a bad hand?

Kurt Busch has been victorious at Bristol Motor Speedway six times, including last fall. Can Busch hit the lucky number seven this weekend to tie with brother Kyle as the winningest active drivers at BMS?

Daniel Suarez was a surprising face inside the top five at Texas. Was it a fluke, or can Suarez wrangle his long-eluded consistency in the races to come?

Questions remain as NASCAR heads to the Last Great Coliseum, Bristol Motor Speedway. With these questions circulating, our Frontstretch team of panelists was asked with the difficult job of deciphering the 12 best NASCAR drivers following Texas.

In what seems like a monotonous trend, Busch nearly completed the weekend sweep. After winning the Truck and Xfinity races, Busch led 66 laps in the Cup race at Texas. While one single driver did not dominate the event, Busch’s laps out front gave him the most laps led in the Lone Star State. Unfortunately for Busch, the Interstate Batteries Toyota slapped the wall, prompting an extended stay on pit road under green flag circumstance. Yet, the No. 18 was able to rally to a 10th-place day. This team is sure resilient.

The reason @KyleBusch came to pit road: Hard contract with the outside wall for the No. 18 car. pic.twitter.com/arh4rnV7Y1

“Kyle, Kyle, Kyle of the speedway! Watch out for that wall! To the tune of George of the Jungle.” -Dan Greene, Frontstretch

“Only finished 10th on Sunday? Sounds the alarms, ring the bells and take cover. The end must be nigh.” -Aaron Bearden, Motorsports Beat

Here are some 2019 Denny Hamlin stats to ponder:

Second in points… only behind Kyle Busch

Second in average finishing position… only behind Kyle Busch

He might be closing in on Busch before too long. Also, Joe Gibbs Racing may be running out of wall space with all the winning that has been going on.

“When DH is able to be penalized twice and still come back to win, it pretty much confirms FedEx is able to ship your items…at least in a racetrack.” -Rob Tiongson, The Podium Finish

A rare occurrence unfolded at Texas. Harvick was consistently the worst Stewart-Haas Racing car throughout the O’Reilly Auto Parts 500. There is no need to worry though. All four of the SHR cars placed inside the top eight positions Sunday. Not bad, unless you are a perfectionist, a la crew chief Rodney Childers. He’s still third in points. What are you complaining about?

Wish I could say something good or positive about today.. It sucked and I cant stand racing like that..
But,, all 4 cars finished in the top 10 again. Thanks to the fans that came out and watched today @TXMotorSpeedway .. @StewartHaasRcng @FordPerformance

“Unhappy Harvick and his team search for answers, in order to produce a more competitive car.” -Kobe Lambeth, Kobelambeth.com

A week after sitting atop the scoring pylon, Keselowski suffered a rear gear issue under caution and was forced to go behind the wall. The No. 2 crew was able to get its Mustang back onto to the track in the closing laps, but a tinge of disappointment and the sting of bad luck follow Team Penske out of Texas. Is Keselowski losing touch with consistency? We will find out at Bristol.

A good effort from the No. 2 @MillerLite crew to get @keselowski’s car back on track to finish the race today.#NASCAR pic.twitter.com/bcMZbjE3at

“From hero to zero in a week’s time.” -Darian Gilliam, Black Flags Matter

“The latest round of ‘pushing through the flu virus’ award goes to Double-A who, after finishing in the top-10 for the billionth time in a row, was revitalized by Texas-sized Smithfield bacon.” -Tiongson

In 20 starts, Logano has scored two wins at Bristol. Yet, the series goes to short tracks, Logano seems to always be a spectacle, whether he wins a race or has a piece of Matt Kenseth’s Dollar General hood lodged in his rear bumper. Can Logano coil in the excitement and have a calm day, because, after Texas, Team Penske sure needs one.

“Picked a fine time to leave me loose wheel.” -Greene

Martin Truex Jr. and Kurt Busch lead the field through the @GEICO Restart Zone and Stage 2 is underway at @TXMotorSpeedway! #OReilly500 #NASCAR pic.twitter.com/33TpeQNQlr

“Truex seems to still be figuring out the JGR formula.” -Adam Cheek, Frontstretch

On this week’s edition of Bowyer’s social media escapades: a young child rides a longhorn, the intensely philosophical definition of clogging and a minuscule unpaid spokesman with a large shadow.

So, why aren’t you following him yet?

It's April Fools Day, so let's look back at one of our favorite @NASCAR pranks.@ClintBowyer vs. @KevinHarvick. Winner: Clint Bowyer. pic.twitter.com/oSjQw8eKl4

“Just send Blake Shelton to every race and who knows, Bowyer might just win the rest of these races!” -Tiongson

After the first six events of the season, Busch looked to be the most competitive Chevrolet this season. That was until Texas qualifying. While the fleet at Hendrick Motorsports impressed after starting up front, the elder Busch started deep in the field. While Busch and Chip Ganassi Racing teammate Kyle Larson struggled, the No. 1 team was relentless with adjustments throughout the event and even overcame a loose wheel. Because of perseverance, Busch came home with a top 10.

Good battle today. Tough to find grip with cold tires, then was burning up RF tires as the race wore on. Happy we prevailed over our own adversity. Bummed for @KyleLarsonRacin We will be @BMSupdates with a vengeance! pic.twitter.com/jf8hBwpuR2

“Did you see the Busch brother argy bargy when Kyle took Kurt three-wide? Me neither. My eyes were closed!” -Lambeth

Engine woes relegate Blaney to a 37th-place result at Texas, but for some reason, he took his frustration out on Bubba Wallace. Uh???

“One of the most snakebitten drivers currently. Was leading before Penske’s engine problems.” -Gilliam

As NASCAR returns to Bristol Motor Speedway, Elliott might just have stats on his side. He has the third best finishing position among active drivers at BMS, though that may be deceiving. Although Elliott has three top 10s at the Tennessee track, the Georgian had posted two finishes outside the top 10, including a dismal 29th-place effort last spring.

“The trifecta of Johnson, Byron and Elliott gave a shot in the arm to HMS this week.” -Leon Hammack, Workin on my Redneck.

So far this season, Suarez joined a new team, fought one of the most mild-mannered drivers in the garage (or so we thought) and finished third at Texas. That’s pretty impressive considering Suarez failed to come anywhere close to the playoffs during two seasons at the powerhouse Joe Gibbs Racing. Suarez sure seems optimistic about the event to come.

“A quiet start — on track, anyways – with SHR has steadily build to consistent speed and a spot in the current playoff grid. A few more runs like Sunday’s third-place effort could make Suarez a dark horse playoff contender.” -Bearden

“It’s not so foolish to put Suarez in these power rankings because he’s starting to hit his stride.  This time, he nabbed a podium finish and perhaps silenced Reddit nation.” -Tiongson

I enjoyed reading this. Thank you for your articles!