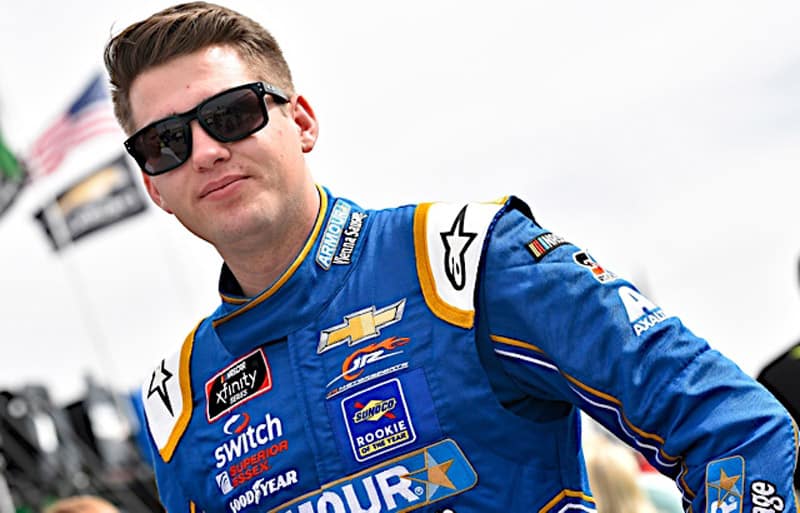 One of the biggest moves over the NASCAR Xfinity Series offseason was Noah Gragson joining JR Motorsports in the No. 9 Chevrolet, a car which won the last two series championships. But yet the 20-year-old doesn’t feel pressure.

Gragson is coming off two full-time seasons in the Gander Outdoors Truck Series driving for Kyle Busch Motorsports, running an additional two races in 2016. In 47 career Truck starts, Gragson has won a pair of races (Martinsville Speedway in 2017, Kansas Speedway in 2018) en route to a runner-up finish in the championship standings last season.

In addition to his Truck schedule last year, Gragson competed in a trio of Xfinity events for Joe Gibbs Racing. In his debut race, he finished second to Christopher Bell at Richmond Raceway. Gragson then backed that performance up with a fourth-place result at Talladega Superspeedway and a seventh at Dover International Speedway.

Now in the 2019 season, Gragson is piloting the No. 9, which won last year’s championship with Tyler Reddick in an underdog fashion, as nobody gave him a realistic shot of winning the title at Homestead-Miami Speedway. Despite the same team winning back-to-back championships (William Byron was crowned champion in 2017 driving the No. 9 Chevrolet), Gragson feels no pressure and is hoping to make it three straight.

“I really don’t think it’s any pressure,” Gragson told Frontstretch of driving the No. 9 car for JRM. “I think because of how the culture is at JR Motorsports, they don’t seem very judgmental, they just want to learn. I think that’s the model that Kelley [Earnhardt-Miller, co-owner] has started, and that’s been her vision since day one. ‘How can we get these drivers to improve and learn throughout their career here at JR Motorsports? If they make mistakes, they make mistakes. How can we improve from day one until the final day?’

“I think with that mindset and that mentality it’s a good opportunity and a good culture to be in.”

Through Gragson’s opening six races in the No. 9 ride, he has a pair of top-10 finishes, including a season-high third at Las Vegas Motor Speedway, his home track. Currently, he ranks eighth in points, third of the JRM drivers.

Even though the season-long championship is the main goal and something Gragson, crew chief David Elenz and the No. 9 team could very well accomplish, Gragson has a list of personal goals he would like to check off first.

“All you can do is execute and the rest is luck. Let’s say you run over a screw and get a flat tire. You can’t control your luck. Just preparing right and doing everything I can do is going to be the best thing possible.”

One thing Gragson plans on utilizing is his JRM teammates Justin Allgaier and Michael Annett. Allgaier has made the Championship 4 in two of his three seasons with the race team, winning a career-high five races in 2018. Annett is hoping to continue his recent hot streak with four top-10 finishes in the first six races of the season, including his first NASCAR victory at Daytona International Speedway.

“Both Justin, Michael and all the drivers in the [No.] 8 car [Chase Elliott, Ryan Preece, Zane Smith, Ryan Truex and Jeb Burton]. It’s been really good so far,” Gragson said of the chemistry with his JR Motorsports teammates. “They are really open to helping us young guys out and just being able to talk with them and carry a conversation. They are really good to us and want to help. It’s easy to talk to those kind of guys. I feel like this is the best I’ve ever gotten along with teammates.”

But one of the main things Gragson wants to improve on personally at JRM is maturing as a person. Since Gragson has been introduced to the mainstream NASCAR audience, he’s been praised and bashed for some of his youthful entertainment.

After winning the Snowball Derby in December, Gragson was criticized for kissing Miss Snowball Derby (Helena Ciappina) in Victory Lane. To his critics’ chagrin, Ciappina showed up to the Xfinity Series banquet one week later as Gragson’s date.

Over the years, Gragson has been entertaining on social media, garnering a loyal following. Whether it was eating wasabi for getting a certain amount of retweets or posting pictures of himself throwing up over the Martinsville SAFER barrier after winning his first Truck race, he doesn’t hold back. Gragson still plans on continuing stunts like these, but also wants to mature.

“I’m at the point of my life where I need to start to mature and go from being a teenager to an adult,” Gragson said. “I definitely think with the surroundings at JR Motorsports and the Drivers Edge Development Program [a drivers program between JRM and GMS Racing that helps drivers focus on their physical, mental and technical development], there’s a lot of maturing to be done. It’s the right tools for me.”

As almost every normal person does, Gragson wants to be liked and wishes people could understand his charisma.

“I would like for everybody to like me,” Gragson stated. “When they [fans] say negative stuff that is kind of false information, it doesn’t bug me too much because I know it’s not true. Ultimately, I would like for people to like me and have them meet me in person because I feel like I’m generous and like to give a lot of my time when I meet people.

“I think it might be misunderstood if you see me on social media and you might get a sour opinion about me. I would just like to meet those people who don’t like me and explain why I do stuff and how I do stuff, and hopefully, they can change their mind about me.”