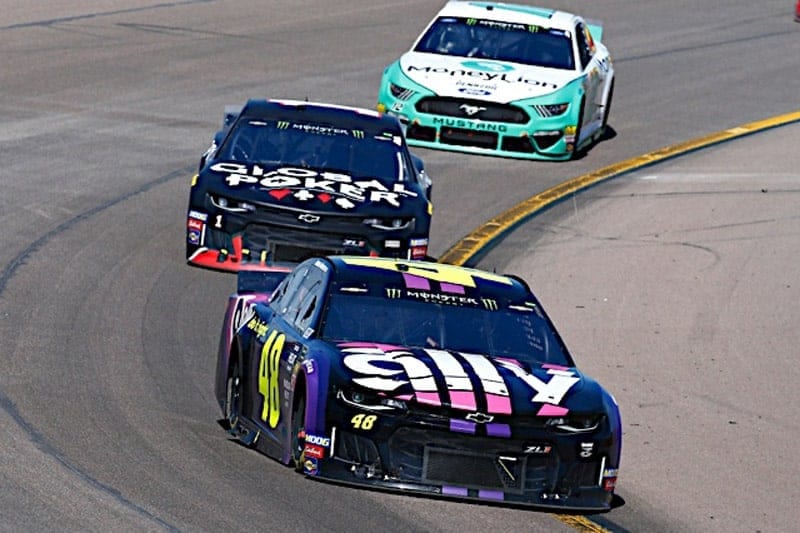 Is Hendrick Motorsports on their way back to the top tier, or was their showing at Texas a one-time thing?

Bryan Gable: It is best not to read too much into one race.  Just a few weeks ago, we were talking about how Hendrick Motorsports had zero top fives through the first five races of the season.  Hendrick is probably going to get better as the year goes on, but we need to measure its progress over a longer period of time, not a race-by-race basis.

Christian Koelle: I feel like maybe their struggles during the West Coast Swing helped them in the long run. It seems like the teams who were good during the West Coast Swing are going to struggle during the first few races coming up because they didn’t have an opportunity to improve on what was bad on their cars, so now they are going to be a bit behind, but once they get some notes, they’ll bypass Hendrick and HMS will be back in the 10th-15th range.

Mark Kristl: Texas Motor Speedway showed Hendrick has speed, but can they sustain it for a full race? Chase Elliott finished second at Martinsville Speedway, but Jimmie Johnson thoroughly struggled. Bristol Motor Speedway is a short track, so will the team succeed? Johnson has won there twice, but his teammates have never won there in their NASCAR careers. How well Hendrick performs this weekend could be an indicator of how close or far behind the team is from being competitive on a regular basis.

Joy Tomlinson:  I know Hendrick hasn’t been great this year, but they have had a better average finish so far than they’ve had the last two seasons. Texas definitely helped boost that for the team. Hopefully Alex Bowman can find the speed his teammates found in future races.

Which current Cup drivers might be in danger of being shuffled out this Silly Season? Which drivers could benefit with a change of team?

Gable: If Christopher Bell goes Cup Series racing next year, he’d probably get a second Levine Family Racing car as opposed to displacing someone at Joe Gibbs Racing.  I’m more curious about what will happen to Ross Chastain.  Kurt Busch‘s deal with Chip Ganassi Racing is supposedly for only one season.  Would Ganassi let Busch go to get Chastain back in the fold, even with Busch performing better than expected?  Is there any other organization that could put together a team and sponsorship for Chastain?  As far as other drivers benefiting from a change of scenery, I would love to see what Chris Buescher could do with a top-flight organization, but I don’t see him leaving JTG Daugherty Racing anytime soon.

Koelle: With the deal about Leavine wanting to open up a second-car, pending funding can be brought, the Christopher Bell issue will more than likely be set in stone. Otherwise, I honestly don’t see very much change as no retirements are happening so empty rides won’t be big deals.

Kristl: With the 36 charters, it’s very hard to predict who will lose their ride at the end of this season. The only deserving Xfinity Series driver for a Cup Series ride is Bell. He is embedded in the Toyota pipeline, so he will race wherever Toyota decides. Theoretically, Leavine Family Racing could add a second full-time car, but they’d prefer a charter for financial reasons.

Tomlinson: I currently don’t feel any driver is in any real danger of losing a ride; if Leavine Family Racing adds a car to their team, Bell could go in there, but it is still early to say.

Should Stewart-Haas Racing be concerned they haven’t won yet?

Gable: As Aaron Rodgers would say, R-E-L-A-X.  Kevin Harvick may be accustomed to winning early season races, but he’s riding a streak of six top 10 finishes, so we know the speed is there.  Aric Almirola had two top 10s and one lap led at this time a year ago.  This year he has six top 10s and 72 laps led.  The No. 41 team had to start over with a new driver, and while Daniel Suarez hasn’t set the world of fire, he’s done a solid job and has posted good results the last few weeks.  Clint Bowyer had me a little concerned after Fontana, but he’s been climbing back up the points standings after two good races.  Stewart-Haas is going to win sooner or later.

Koelle: No, the whole organization is getting stronger and stronger. All four cars are competing for wins and they have been getting strong finishes, Clint Bowyer is one of the drivers who need to clean up some mistakes but otherwise, all four cars could win at any time, anywhere.

Kristl: Stewart-Haas has race-winning speed. Harvick is one of the best drivers in the garage, and Suarez displayed speed at Texas. If not for speeding penalties at Martinsville, Bowyer may contended for that race win. Almirola is remarkably consistent. When SHR earns its first race win of 2019, several more victories will follow.

Tomlinson: No. SHR as a whole should not be concerned. This was the second week in a row that all four cars finished in the top-10; the team is very strong. It’s rather unusual that Harvick hasn’t found a way to win yet, but as long as he finishes well each week I don’t think there’s anything to worry about. It was good to see Suarez find speed on his own in qualifying, he is starting to become a contender now. Just give it time.

The Gander Outdoors Truck Series is one-third of the way through the regular season. Who looks like a championship contender, and who might struggle just to make the playoffs?

Gable: Brett Moffitt and Ben Rhodes both look like they have what it takes to race for a championship this year.  If Stewart Friesen can get over the hump and win a race, the floodgates could open and make him a really tough competitor.  On the other hand, I am surprised that Sheldon Creed has only one top 10 finish so far.  He’s 10th in points right now, so he will need to pick up the pace in order to reach the playoffs.

Koelle: Ross Chastain should be a championship contender, but he’s not electing to take Truck points. It’s differed from week to week, and a lot of last years’ contenders need to clean up some of their mistakes. Stewart Friesen could be the driver I would say, but you also could say Brett Moffitt, Ben Rhodes, Matt Crafton, Johnny Sauter, etc. The Truck Series is brewing up one of the best summers in a very long time.

Kristl: With Kyle Busch‘s dominance in the Truck Series, the playoff picture is wide open! A win by a series regular shifts the playoff cutline. Moffitt, the ThorSport Racing quartet and Friesen are the best six NGOTS regulars at the moment. As for whose in trouble, I’m somewhat surprised the Young’s Motorsports trio hasn’t performed better. Gus Dean and Tyler Dippel have suffered bad luck, but I thought the increased funding, Spencer Boyd‘s Xfinity Series experience, and Dean’s consistency in ARCA would help that team surprise people.

Tomlinson: Stewart Friesen definitely looks like a championship contender, continually fighting with Kyle Busch for the lead in many races. Johnny Sauter and Matt Crafton do also, as well as the ThorSport Racing drivers. For who might not make the cut line, I agree with Mark about Young’s Motorsports being in danger. They did improve at Texas, though, with Dippel finishing in eighth and Boyd in 11th. I can hardly wait for the trucks to return from their break.