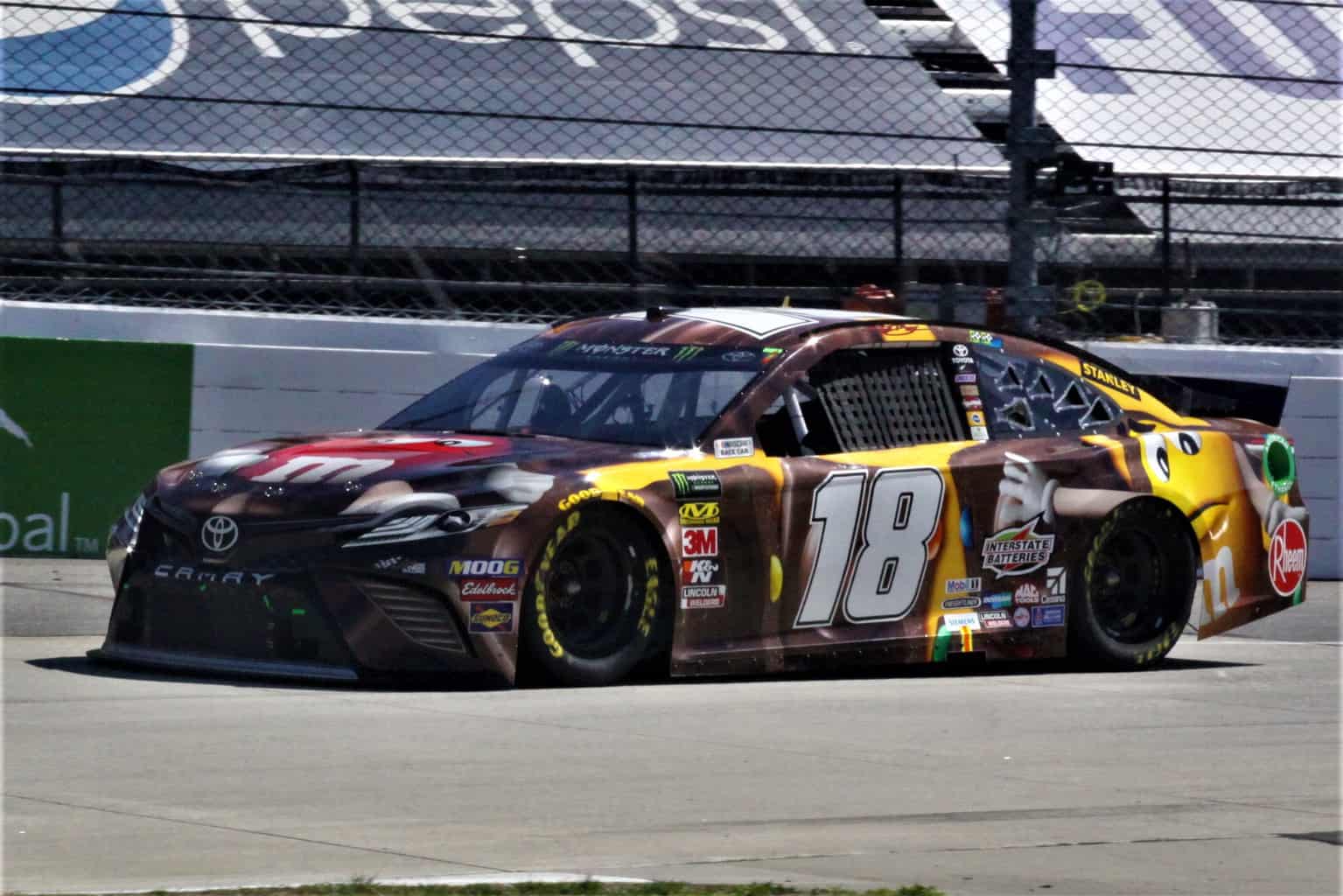 Let’s hear it for short track racing as we set your NASCAR DraftKings roster! The 2019 Food City 500 at Bristol Motor Speedway airs at 2 p.m. ET Sunday (April 7) on FOX Sports 1. The Monster Energy NASCAR Cup Series cars will have no aero ducts and the higher horsepower package for this race.

Recent winners at this track have varied in starting position, ranging from 24th in summer 2016 (Kevin Harvick) to three starting from the pole (Matt Kenseth, Carl Edwards and Kyle Busch). The cars were super quick in qualifying Friday (April 5), setting a new track record, but parity reigned throughout the field. The top 30 drivers were separated by just half a second as they zipped around the track at over 130 mph.

A new package and equal times means just about anyone can win this race. There are also 500 laps in this one, giving you plenty of chances for bonus points. Choosing the right driver to lead several laps can help you earn the winning DraftKings score with a middling team.

As always, be sure to check for updates on drivers that may fail pre-race inspection; that can affect your DraftKings score. (For example, Chase Elliott, should he fail, would start the race from the back although DraftKings would still count him from first).

Now, let’s get to my picks!

Busch won this race a year ago and has been very fast this year (see: two Cup wins already in seven starts plus a stockpile of Xfinity and Truck victories). He also won here in the summer 2017 race started very close (18th) to where he’ll start Sunday (17th).

Busch can give you positive place differential points as he marches to the front and potentially lead some laps, too. With two wins in the last three MENCS races at Bristol, Busch still enters Sunday as one of the favorites.

Don’t like Busch? All four Joe Gibbs Racing cars are quick this weekend, so you probably couldn’t go wrong if you wanted to include Busch’s teammate Erik Jones in your lineup. Jones is more risky, though, since he starts fourth, but he does have two top fives in four starts at BMS.

Harvick has not won yet in 2019, but that doesn’t mean his DraftKings scores have been bad. At Texas last week he scored 57 points, partially because he started 23rd and finished eighth.

Harvick is starting 13th Sunday, but he does have two Bristol wins (most recently the summer 2016 race). He does have a fast enough car to finish higher than that. However, his price is pretty high compared to the potential value; Stewart-Haas Racing has yet to reach Victory Lane this year.

Still, if you didn’t choose Kyle Busch, Harvick is a solid alternative.  He hasn’t run worse than 10th at this track in four years.

Logano won the summers of 2014 and 2015 at BMS. Sunday, I think he could be like his Team Penske teammate Brad Keselowski was at Martinsville and dominate most of the race.

Both years when Logano won at Bristol, he started fifth, and Sunday he’s in a similar starting spot. He can also give you bonus points for fastest laps and positive track position.

The only problem for Logano, like Harvick, is price. If you’re unsure, Logano’s teammate Ryan Blaney broke the track record here in qualifying and starts third. He is certainly an option as well after dominating parts of this race last year before getting caught up in a crash.

Bristol is not typically one of Elliott’s better tracks since he’s moved up to the Cup Series. However, he showed a ton of speed at Martinsville earlier this year and led some laps. He was the only one to challenge a dominant Keselowski later in the race. Elliott scored 100.3 DraftKings points in the STP 500 and has a chance to do that again at BMS.

Elliott has that same opportunity here, though if he crashes out early the No. 9 Chevrolet could really do damage to your lineup. If you’re afraid he’ll replicate last year’s early wreck? Hendrick Motorsports teammate Jimmie Johnson is also an option to plug into your roster, as he qualified 10th and won this race twice (the last coming in spring 2017).

Stenhouse has a pretty good history of qualifying midpack and finishing inside the top 10 at Bristol, which places him at a near perfect spot if you wish to use him. Three top-10 finishes in his last five starts give him a better-than-expected return here compared to other tracks. It’s also a great opportunity for the Roush Fenway Racing driver to give you positive place differential points.

RFR teammate Ryan Newman also has great track history here, but starts this race 11th, so he may not return good value.

Preece is my Honorable Mention because of his recent history in the NASCAR Xfinity Series at BMS. He won the Fitzgerald Glider Kits 300 a year ago after starting the race seventh; his team, JTG Daugherty Racing, was 17th last spring here with AJ Allmendinger.

Preece scored 28 DraftKings points the past two weeks, fairly respectable value considering his price. He can help you balance out one of the higher-priced drivers in your lineup.

Hemric is my Dark Horse Performer because he doesn’t have as much Bristol track history, though he raced with Richard Childress Racing in NASCAR’s Xfinity Series. He finished third in the spring Bristol Xfinity race last season after starting fourth.

While Hemric’s time in that series was good, I included him here because of how well he ran at Martinsville earlier this year. He had 36 fastest laps in the STP 500, which helped boost his DraftKings score to 36. Hemric is risky, but he may be able to find similar speed at Bristol.

RCR teammate Austin Dillon qualified 15th for this event, so he’s a good alternative too if you need it.