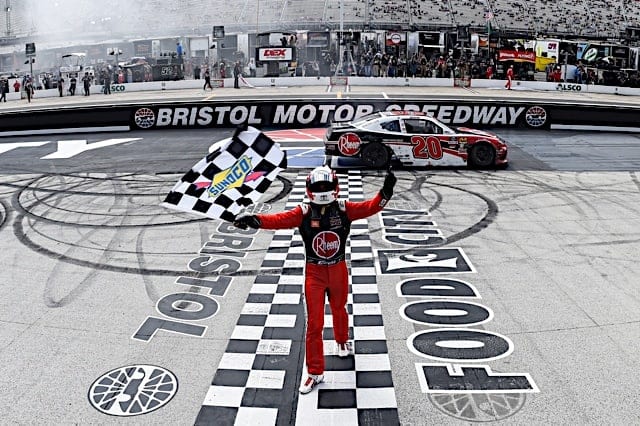 Sometimes it seems like nothing but a win is going to leave Christopher Bell happy after a NASCAR Xfinity Series race. If that’s truly the case, he should be all smiles after the Alsco 300 at Bristol Motor Speedway on Saturday afternoon, especially since he’s leaving with an extra $100,000 to boot.

The extra dough comes courtesy of the race’s status as the first Dash 4 Cash event of the 2019 Xfinity season, but the happiness stems from Bell collecting his first win ever at Bristol. It was also Bell’s second series victory this year and 10th of his career. Defending Xfinity champion Tyler Reddick came home second, with Cole Custer, Chase Briscoe and John Hunter Nemechek rounding out the top five.

“That’s pretty cool to get my first win here with the Dash 4 Cash bonus,” Bell said during his Victory Lane interview. “These Toyota Supras are really, really fast, and Joe Gibbs Racing has a really, really good package here at Bristol. For whatever reason, we struggled to find that. I didn’t feel good basically all practice, didn’t qualify good, and as soon as they dropped the green flag for the race, I was really, really loose. But the longer the runs got, the better I got.”

Bell did indeed complain of being too loose early in the race, though his No. 20 Toyota seemed came alive whenever there was a long time between cautions. That was evident in stage two, when Bell finished third behind Justin Allgaier, who also claimed stage one, and Reddick.

Those three drivers plus Custer were engaged in a thrilling four-way battle for the top four spots in the final stage when Allgaier suffered a mechanical problem and went from the lead to the garage in a matter of moments.

That turned the lead over to Bell, but Brandon Jones threw him another curveball by staying out when all of the other lead lap cars pitted during a caution caused when Harrison Burton, making his first ever Xfinity Series start, cut down a tire with 40 laps to go.

Jones did an admirable job holding off the field on older tires for a while, but Bell was simply not to be denied. With 17 laps left, he made the pass for the lead that was the last one he’d need on the afternoon.

Here comes the 2️⃣0️⃣! @CBellRacing passes his @JoeGibbsRacing teammate for the lead late at @BMSupdates! pic.twitter.com/ZdIfknYCA1

Reddick, who made some news earlier in the week by sporting a pink and white paint scheme sponsored by Dolly Parton and her businesses, left Bristol close in every portion of the race but still searching for his first win of 2019.

“Just needed a little bit more there to get past Christopher,” Reddick said. “The unfortunate part is when I’m behind him, it is hard to make the pass.

It will be hard to pick against Bell making it two straight wins next week at Richmond Raceway considering he won both Xfinity Series events there in 2018. Reddick, Custer and Briscoe will try to not only dethrone him but to nab an extra 100 grand for themselves when the second Dash 4 cash race, the ToyotaCare 250, takes place on Friday night.