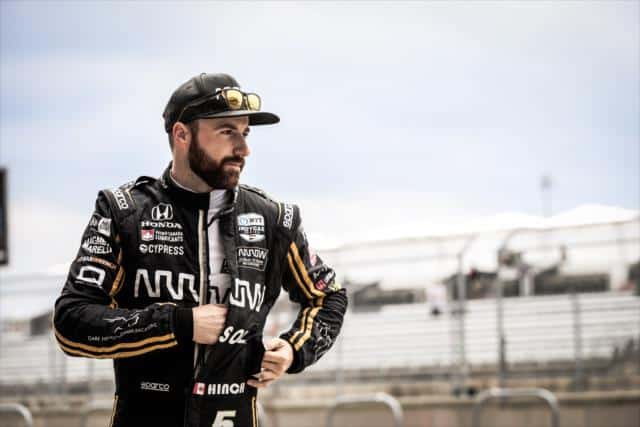 The NTT IndyCar Series heads to Barber Motorsports Park this weekend in a fervor, fresh off a spectacular showing from one of the series’ newcomers.

Colton Herta, at the ripe old age of 18 years and 359 days, stunned the world by claiming his first IndyCar win two weeks ago at the Circuit of the Americas and has dominated the headlines ever since. But that means all eyes will be on the series’ youngest-ever winner this weekend when the series takes to the narrow, 17-turn circuit in Leeds, Alabama for the Honda Indy Grand Prix of Alabama.

Herta’s obviously off to an impressive start in his rookie season, but Sunday’s race will be his biggest test so far. The Harding-Steinbrenner Racing pilot will now have to return to the cockpit and get back down to business after embarking on a quick breeze through New York, soaking up some well-deserved media attention. But how he performs this weekend could tell us a lot about his future and whether he’ll end up like Juan Pablo Montoya in 1999, with seven wins and a championship, or Graham Rahal, who took six seasons to get win number two.

Luckily, his speed at COTA could translate well to the similarly fast, smooth, 2.38-mile road course tucked in the hills outside Birmingham. He’s hovered near the top of the timesheet all weekend, and with a new sponsor GESS International adorning the side pods of his Honda machine, the young American will be looking to prove that his record-breaking win was no fluke.

If this week’s practice sessions are any indication, we could be in for a wild Sunday. Each session was dominated by red flags, with spins, offs and trips through the gravel traps proving common. So common, in fact, that half the field ended up turned around or off course at some point over the weekend’s three sessions.

Does anyone know the way to Toowoomba? Asking for a friend.#INDYCAR // @12WillPower pic.twitter.com/9gKpeCIH8o

Despite a spin in Friday’s morning session, James Hinchcliffe was the first driver to dip under 1 min. 9 sec., topping the charts in practices two and three, putting together a solid effort for his Arrow Schmidt Peterson Motorsports team after a disappointing result at COTA.

Felix Rosenqvist also bounced back early from a tough weekend in Austin, putting his Chip Ganassi Honda machine P1 in the first practice, before falling back to mid-field in the final two sessions.

Dale Coyne Racing’s Sebastian Bourdais also found some speed early and managed to keep the pace through Saturday morning, finishing in the Top Five in each of the three sessions.

It was mostly disappointment from the Team Penske camp, as all three drivers struggled to find speed. Josef Newgarden–winner of three of the last four races at Barber–and Will Power–two-for-two in pole positions this year–never managed to crack the top 10. However, Simon Pagenaud, in a shift in his early season fortunes, was able to find some pace during Practice Three, finishing seventh behind the fastest Chevy, Ed Carpenter Racing’s Spencer Pigot.

But the dicey practice sessions didn’t translate to qualifying. The first two groups went incident free, punctuated by the ousting of two of the three Penske cars, leaving points-leader Newgarden and Pagenaud with a lot of work to do Sunday.

The field followed the opening groups up with a clean second round for the Firestone Fast 12, and a few surprises advancing into the final shootout for pole.

Pigot went fastest in the opening round, then put his ECR Chevy second in the Fast 12, just a tick behind the speedy Hinchcliffe. The pair were joined by Bourdais, Scott Dixon, and the Rahal Letterman Lanigan Racing pair of Graham Rahal and Takuma Sato.

And it was that pair of RLL who put on the most impressive display, locking out the front row, with Sato nipping his teammate at the line in a last-ditch flier. It’s Sato’s first pole position since he led the field to the green flag at Pocono in 2017.

Herta just might be the most compelling storyline of the season, let alone this weekend, but it should be fun to watch how he develops week in and week out. He’ll be starting ninth on Sunday, so he’ll have a bit more work to do if he wants to regain the magic of two weeks ago.

With the Penske trio mostly off-pace, it’s up in the air as to who will carry the Chevy flag on Sunday. Pigot and Carlin Racing’s Patricio O’Ward both cracked the top 10 on the speed charts in what was a promising start to the weekend. Pigot then backed up that early performance by equaling his best ever qualifying effort, rolling off sixth. However, O’Ward couldn’t back up his practice times, so Pigot will likely be the American OEM’s best hope for a solid result.

With that being said, you can never rule out the Penske fleet, especially at Barber. The Captain has won six of the nine NTT IndyCar Series races in Alabama, and I would count on at least one of the Penske Dallaras to make a charge through the field.

Bourdais and DCR are also shaping up to be tough to beat on Sunday, as the plucky Illinois-based team converted their strong practice showings into a solid starting position of fifth. The Frenchman nearly pulled off the upset at Barber last season, but some strategy missteps kept him from Victory Lane, meaning he should be just as hungry as anyone when the green flag drops on Sunday.

But it’s RLL’s surprising speed in qualifying that should be most interesting to watch tomorrow. A front row lockout is quite the change from the pair of veterans’ solid, but relatively lackluster start to the season, and turning those starting positions into quality results could jumpstart both Sato and Rahal as we inch closer and closer to May.

Sunday’s pre-race coverage begins at 4 p.m. ET on NBCSN, with the green flag expected to drop at 4:15 p.m. E.T. Steaming is available on the NBC Sports App with a cable subscription