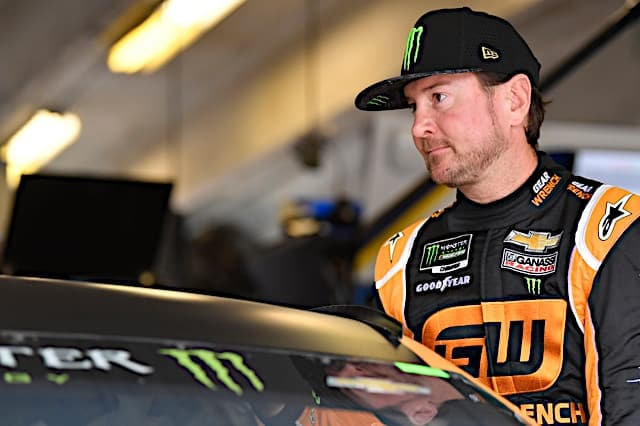 Busch brothers battling at Bristol. Stop me if you’ve heard that before.

It was younger brother Kyle Busch who held off a late charge from older brother Kurt Busch in the closing laps of the Food City 500 at Bristol Motor Speedway. The Chip Ganassi Racing driver’s performance was the No. 1’s third top five and best finish of the season.

“It was close. I wanted to be closer to my little brother to wreck him on the last lap because I flat out would have,” he said with a smile. “He’s already got wins this year and he would have figured it out. I just slipped up with about three laps to go, I couldn’t quite hang in Turn 1. For our Monster Chevy, it’s a really good run. We’ve got a lot of puzzle pieces, we’re putting them together. This is my favorite track. We almost won but we know we’re wanting some more.”

You got to love the honesty! ?@KurtBusch wasn't going to hold anything back if he caught his brother at @BMSUpdates. pic.twitter.com/YiCOmLoLW3

Busch has hit the ground running in 2019 with his new organization. Despite only two finishes outside the top 10 (Daytona and Martinsville) in the first eight races, he sees areas of improvement to be made.

“Qualifying has been a disaster and I can’t lean on my right rear tire,” he said. “We gotta fix that. When we do that, we’ll restart better there. We’ll see how it plays out. Just gotta thank all my guys for the hard work and filtering through information. It’s our first time going to all these tracks together. Another top five is a solid result, but gotta be that point where we’re just clicking on all eight cylinders and nailing it.”

Busch only has two top 15 starts on the season (coming in the first two races). On Sunday, he had a net gain of 25 positions after starting 27th.

“This car, we were struggling on qualifying, we struggle on taking off,” he said. “I just can’t get that right rear to grip till it gets heat in it. It’s hard to be patient when you’re running for the win on old tires.”

Once the No. 18 was done with his burnouts on the frontstretch, he was stopped before pulling into Victory Lane by Kurt, who slammed his hands on the hood and the two shared a laugh or two.

“I told him how frustrated I was and I was gonna wreck him,” Busch said with another smirk. “(Kyle) said ‘oh really?’ and I said ‘yes, I was.”

Busch will look to do one spot better next weekend at Richmond Raceway in the Toyota Owners 400, where he has two career victories.

I honestly believe Kurt would have, good for him. Hey Chip, it was Jamie Mac, not the car.