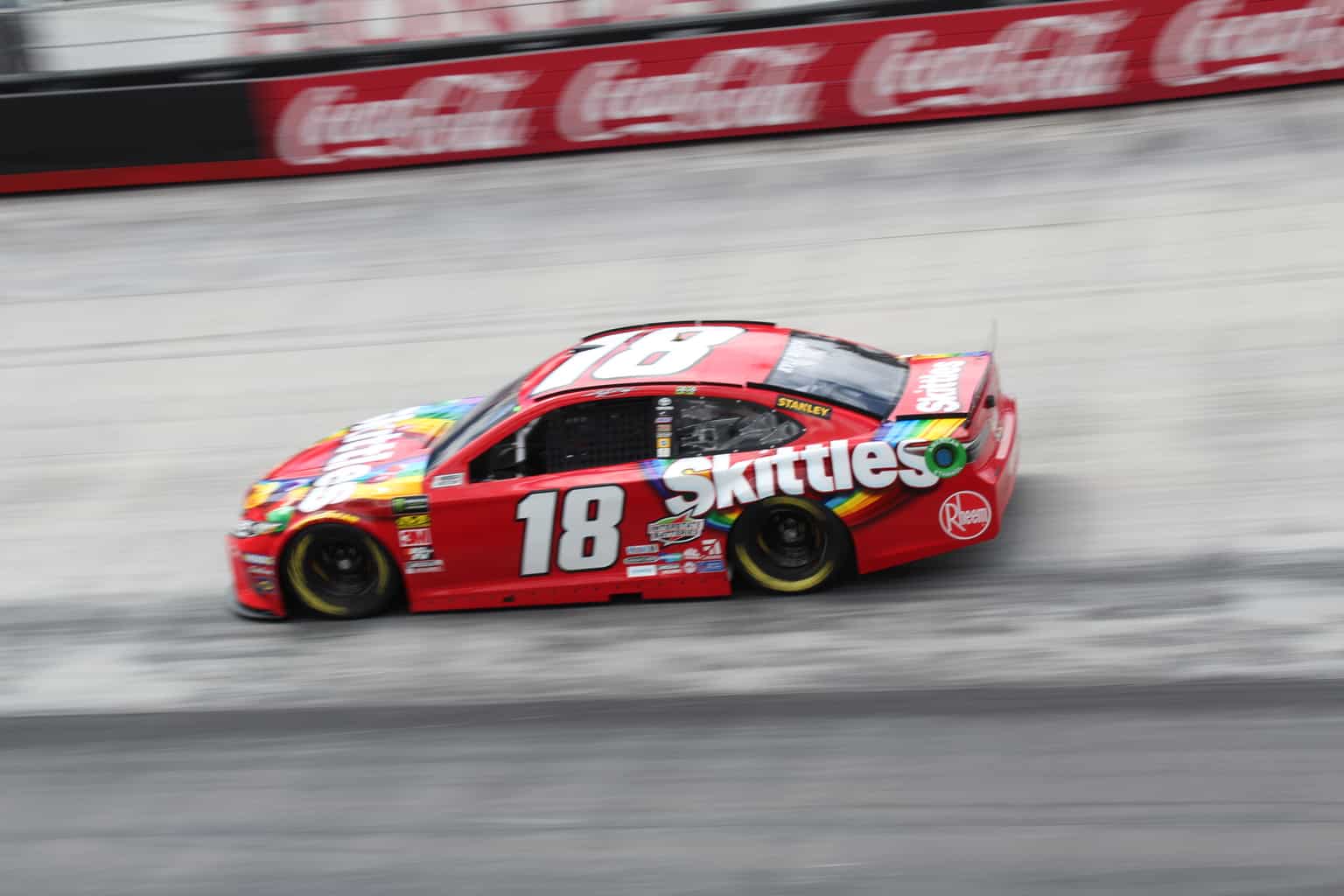 A wreck one lap into the Food City 500. A crushed rear bumper. Fighting nearly 500 laps to gain track position. None of that tough luck could deter Kyle Busch at Bristol Motor Speedway from another Monster Energy NASCAR Cup Series victory.

Busch took control after the final restart on Sunday (April 7) at Bristol Motor Speedway and captured his third win in eight 2019 Cup starts. A caution with 20 laps left led to multiple pit strategies and Busch stayed out on old tires. His brother, Kurt Busch, Daniel Suarez and Paul Menard followed suit while leader Joey Logano was shuffled back to eighth.

That gave Busch the cushion he needed to outlast the No. 22 of Logano. Brother Kurt pushed him hard over the final 15 laps but Kyle ultimately pulled away.

“It was fun to battle it out with the brother at the end,” the younger Busch said. “He was working the top and I thought, ‘I better go.’

Busch recovered from a second-lap wreck where a stack-up in front caused Ricky Stenhouse Jr. to spin him out. Ryan Preece then hit the back bumper of the No. 18 Toyota and ruffled up the back bumper.

But the Joe Gibbs Racing team persevered, worked back into contention and chose the right pit strategy late. It left older brother Kurt left to settle for a runner-up finish after the No. 1 came close, but not close enough.

“That one’s tough,” the Chip Ganassi Racing driver said. “I was going to wreck my little brother to win today. He’s already won, I feel like he could give one to his brother. I wanted that one bad. Three laps to go, it stepped out in Turn 1 and I really wasn’t close enough to win after that.

“We’re not quite ready to win yet, but that was close.”

The brothers broke up what had been another dominating performance by Team Penske. The trio led 344 of 500 laps but chose the wrong pit strategy down the stretch. To add insult to injury, Brad Keselowski got black flagged following a final restart that saw him three-wide and out of position.

“I feel like we won the race a couple of times, we just didn’t win it when it mattered the most,” Logano said. “The restart was a mess, they were all three, four-wide. You can have the fastest car and don’t do the rest of the stuff. Everything went the wrong way at the end.”

Logano wound up third with Ryan Blaney and Denny Hamlin rounding out the top-five finishers. Menard wound up sixth, followed by Clint Bowyer, a late-race contender for victory before some contact with Logano cut down a tire.

“He was chopping down pretty hard,” Bowyer said afterwards. “I know it was time to race, but he didn’t leave me a whole lot of room right there.”

The Stewart-Haas Racing driver is now 0-for-27 lifetime at Thunder Valley.

Daniel Suarez was eighth in the race, recovering from a one-lap pit penalty while Ryan Newman and Jimmie Johnson rounded out the top 10. Pole sitter Chase Elliott wound up 11th after contact during the race affected his power steering. Elliott would later earn a lap back under controversy after spinning Matt Tifft on the backstretch; NASCAR gave him the free pass despite helping cause the caution.

Overall, the Bristol race featured plenty of action after a more sedate Martinsville short track event two weeks ago. There was constant, back-and-forth passing throughout the field; up front, there were eight leaders and 21 lead changes. A litany of mechanical issues, tire problems and contact led to unpredictability that’s been missing for much of NASCAR’s 2019 MENCS season.

“Fun place to race,” Bowyer said. “You’re out there with a smile on your face, racing two or three-wide. We’ve finally got a good blend of [traction compound] down on the bottom.”

Despite the quality racing and rain that held off, Bristol’s crowd was noticeably light. But the crowd was treated to plenty of comers and goers along with underdogs that had strong performances. Matt DiBenedetto ran 12th, his best finish for Leavine Family Racing, while Ty Dillon won the first NASCAR Cup stage of his career (15th).

Kevin Harvick had a pass-through penalty at the start of the race for his car failing pre-race inspection three times. He spent 480 laps trying to get back on the lead lap before ultimately finishing 13th.

Not that bad of a race but the lack of butts in the seats was crazy! DW was talking about traditions returning, but packed house spectators ain’t one of them.

Unless you take “tradition” to mean the first race at Bristol in 1961. The grandstands then would seat only 18,000. The number of fans there yesterday could’ve just about filled that up!

I am not one to ever give a sheet about butts in the seats or comment. But here it goes! WOW, OH WOW. What a shocker, nobody was there!!!!!!!!! I hope NASCAR is embarrassed, but I suspect not.

the question is what traditions are returning? Making money must be it.

You may not like his personality, but we are watching some of the greatest driving in the history of the sport. I can’t recall because of the lack of TV coverage back in the day, but did Petty, Pearson and Gordon win races after crashing on the first lap, or did they just have a dominating car leading the whole day?
How can the media not mention all the empty seats, when a few years ago you were on a waiting list to buy tickets. To me, that is a story to be told.