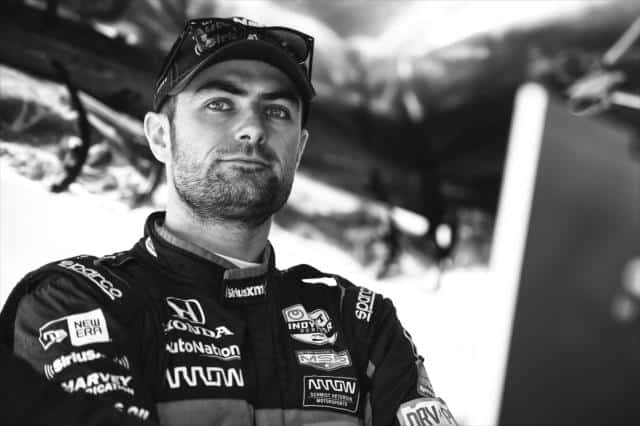 Instead of just jumping into the pool, Jack Harvey has been testing the waters over the last three seasons. The Bassingham, England native made his debut at in the 101st Indianapolis 500 and since has continued to get acquainted with the series over time. Harvey has since grown his schedule over the pace of his short career and has begun making bigger splashes as of late.

Most recently, he has pulled together an impressive two race string earning his career-best finish in St. Petersburg and at the Circuit of the Americas (10th). Harvey will make his 12th start in the NTT Data IndyCar Series on Sunday (April 7) in the Honda Indy Grand Prix of Alabama at Barber Motorsports Park.

He has eight races remaining on his schedule for this season meaning he still has eight opportunities to make an impact. Harvey could land in Victory Lane at any of those remaining eight races on the circuit because literally anything can happen and it can happen in an instant just ask Colton Herta, who won the series’ last race at Circuit of the Americas.

Christian Koelle, Frontstretch: During the first two races, you have tallied your best career finish of 10th. How much momentum does getting back-to-back career-best finishes carry over into the rest of the season including this weekend at Barber?

Jack Harvey: The hardest thing to try and generate is momentum. Having two back to back good finishes set us off on the right foot and then the goal is obviously to keep it going that way. It was one thing for us to talk about picking up momentum, but now we are actually doing it. So far everything is trending in a good direction so we are going to try to keep it going this weekend at Barber.

Koelle: What were some of the expectations you had during the start of the season this year and do you feel like you’ve exceeded or met those expectations with those career-best finishes?

Harvey: I feel like we have met our expectations, perhaps exceeded them in St. Pete with our seventh-place qualifying result. So far we have clear goals that we are trying to achieve. We are aiming for top 12 qualifying and top 10 race and we got three out of four of those results so far.

Koelle: Do you feel like knowing you’ll run more races helps you perform better than if you were doing one-offs?

Harvey: Yes, definitely. There is a sense of comfort when you know everything isn’t desperate. When we were only doing a few races you never really knew when you were going to get in the car next so you are just pushing so hard all the time. When you try to improve and be better, you sometimes overdrive the car waiting on everything to be perfect and it doesn’t always go that way.

Doing more races allows everyone to relax and allows us to gradually get to where we need to go. When you know you only have the one race and it doesn’t go the way you want, and it’s out of control, it’s a devastating feeling.

Koelle: You have upped your schedule from three races (2017), five races (2018) and now 10 races (2019). What is it like to your mental mindset adding races to your schedule including this weekend’s race at Barber, your first time here in an IndyCar?

Harvey: It’s not only nice for me but it’s nice for the team as well. To me, it’s not just getting to do 10 races (from six in 2018) but it’s continually trying to do the full season. We’ve seen our program expand with our partners, AutoNation and SiriusXM which has honestly been awesome. We need to be very grateful for what they are doing.

We also don’t want to just come and do 10 races or even a full season, we want to come and do them well. We want to be a force to be reckoned with. For me, it was great to see the program headed that way and I think the team is operating under the same feeling as me.

Koelle: You have improved in the two times you have run the Indianapolis 500, do you feel like running more races before it will help you get acquainted with the car and be able to communicate more with your engineer and team to help get the car as great as possible for Indy?

Harvey: Definitely. I think even more so this year because it is going to be the first oval for everybody in the series. There will be an even more level playing field in that regard. My first year at the 500 was a bit of an eye-opener and last year I thought we had good pace throughout the month. I’m really hopeful that we can have a good month of May this year too.

Koelle: IndyCar added Circuit of the Americas and WeatherTech Raceway Laguna Seca this season, what are some tracks that you would like to see added to the schedule?

Harvey: I’m biased, I would love to see a race in the UK. If I were to take IndyCar to the UK I would go to Silverstone, Donnington Park or Brands Hatch. I do feel like COTA and Laguna are places where IndyCar should be racing. It’s a premier series and those are two premier circuits in the country. I also had a really good time at Watkins Glen when we went there, so I’d like to see a way to get that track back on the schedule.

Koelle: What are some of your long-term goals with Meyer Shank Racing? Could we see you battle with the organization against the bigger teams like Team Penske and Andretti Autosport for wins and ultimately championships?

Harvey: Collectively we want to do a full season. I love Mike (Shank), I love Jim (Meyer) and everyone has been super friendly since I’ve been a part of MSR. We didn’t just put this together because we got paired together, we believe in each other and we are optimistic about what the future can look like.