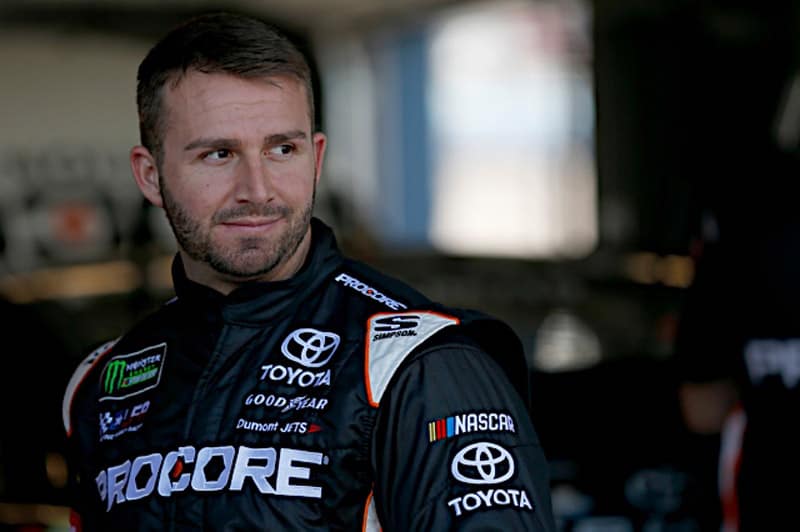 Matt DiBenedetto and Leavine Family Racing have been quite the surprise thus far in 2019. In fact, this group had the kind of weekend at Bristol Motor Speedway that will have us revoking their underdog eligibility if it were to become a regular occurrence.

Many fans were first introduced to DiBenedetto at this very race three years ago. That’s when the relatively unknown driver and his No. 23 BK Racing team stunned the NASCAR community with a sixth-place finish. DiBenedetto’s emotional post-race interview won over the hearts of underdog fans everywhere.

Fast forward to this past weekend, when DiBenedetto was one of the fastest cars in practice in both fastest single-lap time and fastest averages. The No. 95 Toyota then spent almost the entire race in the top dozen, running as high as sixth in the closing laps. When the caution came out with less than 25 laps remaining, the LFR team opted to follow the race leader down pit road for new tires. Mired in traffic, DiBenedetto was unable to regain the positions he had surrendered to pit, finally crossing the finish line in 12th.

Ty Dillon became the first underdog to win a stage in 2019, as the Germain Racing standout claimed the opening green checkered flag. When the field slowed for a caution flag with six laps remaining in stage one, the team opted for track position and stayed out, moving up to second for the restart. The green flag waved with only three laps left until the stage break and Dillon was able to sneak into the lead, holding on and getting the win in a photo finish with Clint Bowyer. Dillon maintained his pace throughout the event, winding up 15th at the conclusion. After DiBenedetto, Dillon was the only other underdog to earn a top 20 result.

“That (stage win) was huge for our team, to go head-to-head with the top teams is huge for GEICO and Germain Racing,” Dillon said after the race. “That was a really cool moment, something we are really proud of. We are proud of the direction we are going with our race team.”

On Saturday (April 6), Ryan Seig once again carried the underdog banner, finishing 12th in the Xfinity Series race at Bristol. Hot on his heels was the No. 51 of Jeremy Clements in 13th position.

Also continuing their hot streak this season was Bobby Dotter owned team cars of Gray Gaulding and Ray Black Jr. The duo finished 15th and 16th, respectively, the fourth time that both drivers have finished in the top 20 in seven races this year.

David Starr is one the most experienced underdog drivers in the NASCAR garage today. But this journeyman racer has enjoyed a bit of success over the course of his lengthy career.

Starr made his national touring series debut in the NASCAR Gander Outdoors Truck Series back in 1998 at ISM Raceway (Phoenix). That began a run of 16 years running a full or partial schedule in trucks. Starr won four times, the first at Las Vegas in 2002. He would go on to collect victories in 2004 at Gateway and ISM, followed by a 2006 win at Martinsville Speedway. The 2006 season was his best overall, as he finished fourth in the final standings.

Starr also made nine starts in the Monster Energy NASCAR Cup Series, beginning in 2011. Interestingly enough, Starr was the first to race for Leavine Family Racing, as both driver and team made their debut that year at Texas.

This year, Starr is running his fourth full time slate in the NASCAR Xfinity Series and second behind the wheel of the Jimmy Means Racing No. 52 car. Means’ family-owned team has been in operation since and has fielded cars for drivers such as Trevor Bayne, Kevin LePage, Mike Wallace and dozens of others. Between the experience of the team and driver, the 2019 Xfinity season has the potential to be one of Starr’s best yet.

I guess it’s good to be extremely disappointed in finishing 12th. Team did a great job, good pit stops, good car, not the finish to show it ?

P27 today at Bristol. Unfortunately not the result we wanted but found some speed at the end. Here is the recap: pic.twitter.com/XrdxIecLlS

This is the first stage victory of @tydillon's career. #FoodCity500 pic.twitter.com/B17TZ6XXS3

.@JClements51 #AllSouthElectric Chevy has to start in the back in today’s #Alsco300, spins his way to equaling best finish of year with a lucky P13 @BMSupdates @XfinityRacing. @RichmondRaceway is up next with some #FridayNightLightsShortTrackin. See ya there!! #Team51 pic.twitter.com/qkShde56BY

Just kidding. It was the ENTIRE LOWER CONTROL ARM. pic.twitter.com/Xj4JNhW44V

It’s hard to call LFR and DiBennidetto an underdog, considering they are the only Toyota backed team outside of Gibbs, by mid-season they will have everything in line and should be running up front weekly, given their inventory mostly came from Furniture Row Racing.