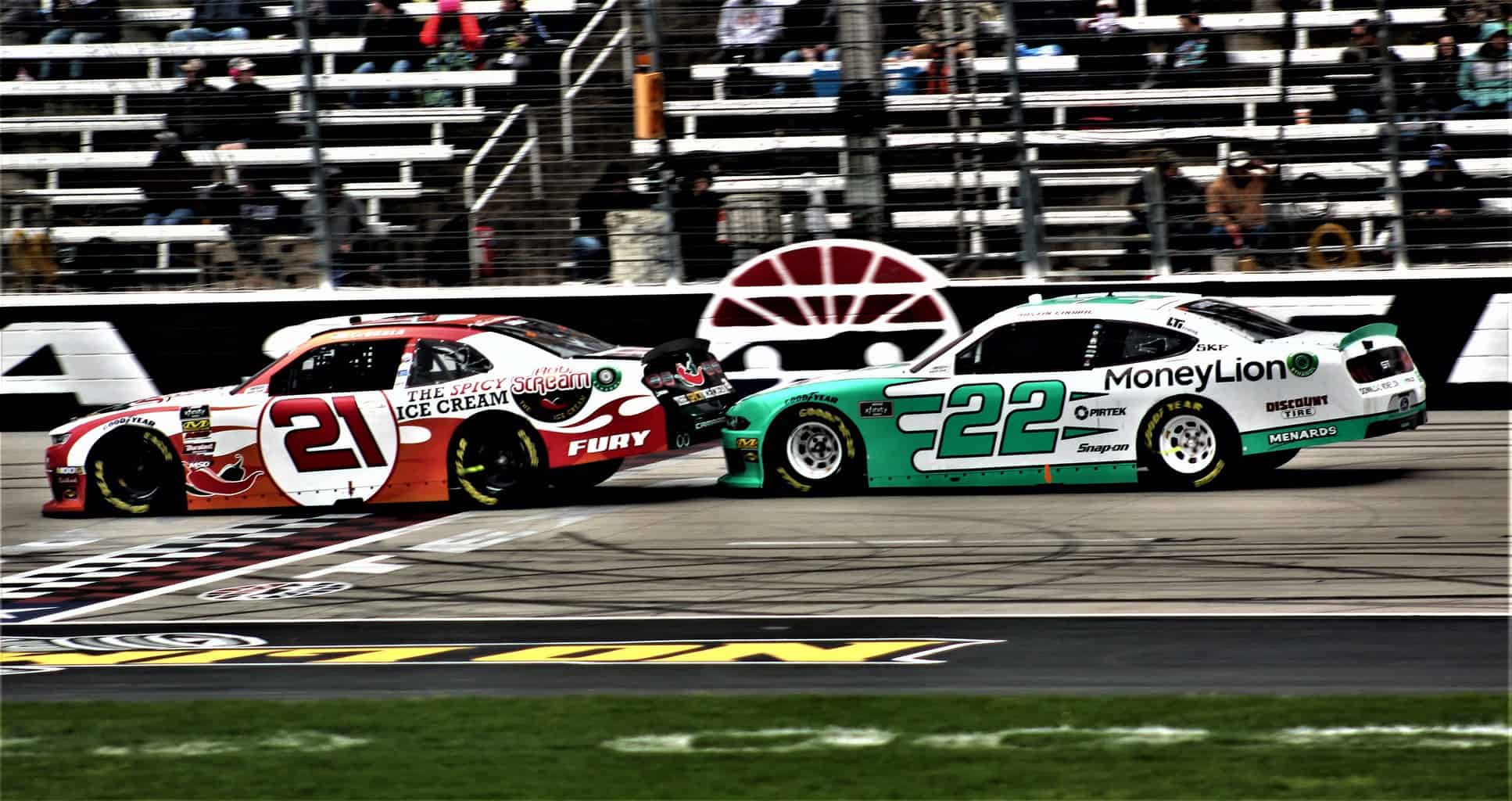 After making his 2019 Xinity Series debut at Texas Motor Speedway with Richard Childress Racing a couple of weeks ago, Kaz Grala will once again pilot the No. 21 HotScream Chevrolet when the series hits Richmond Raceway this weekend.

In mid-February, RCR and Grala announced a partnership that put him in the No. 21 Chevrolet for “select races in 2019,” though there isn’t a clear number of starts he’s scheduled for.

“It’s a work in progress because we’re trying to add as many races as we can,” Grala told Frontstretch while at TMS. “If we have a good weekend here in Texas, that could go a long way to possibly putting a couple more dates on the schedule.”

Ideally, Grala would be running a full-time schedule, but he was unable to put together enough sponsorship to run family-owned and operated Fury Race Cars, the organization he finished the 2018 season with. Enter the partnership with RCR.

“It all stems back from Fury Race Cars last year,” Grala explained. “We were a new team, of course. We started out the gate pretty good last year, made quite an impact, turned some heads, piqued a couple sponsors’ interest.

“We didn’t get enough for this year to run Fury full-time, but we got some sponsorship,” he continued. “We looked at it as ‘where can we bring the sponsorship to get the most for our partners?’ RCR not only had an existing program but quite a good one at that. No better place to bring a sponsor than Richard Childress Racing. They’ve been great and supportive so far and helped us with our relationships with these companies.”

In his first start with the organization, Grala had high hopes for a strong run, knowing the strength of the equipment RCR brings to the table. But he was also realistic in what he expected from the race, knowing there were a couple of Monster Energy NASCAR Cup drivers, along with a few other part-time efforts that aren’t typically there.

“It’s a stacked field this weekend [at Texas],” Grala said before he had even practiced the No. 21 at Texas. “I’d say our baseline goal is to get a top 10 and I’d say our reach goal would be a top five.

“As we work more and more together, there’s no doubt that top fives are certainly achievable for RCR,” continued Grala. “They have the speed, they have the equipment, they have the people.”

Grala, with the help of crew chief Justin Alexander, posted top-10 speeds in both practice sessions at Texas before qualifying 12th. He ran inside the top 12 all day until a late-race brush with the wall relegated him to an 18th-place finish, two laps down. It hardly tells the story of a race day where he had a realistic shot at the win or, at the very least, his “reach goal” of a top five.

Despite the finish, Grala was upbeat about his debut. Even Richard Childress stopped by post-race to shake his hand and congratulate him on the strong run. Though it was hard to hear all that was said between the two, the conversation appeared to be an encouraging one where Childress said, “you’re gonna be good.”

Tough end to an otherwise solid day. If it wasn’t for that last caution, we were in position to race for the win. I slipped up on that last restart, but that’s part of racing. Thanks @RCRracing for a fast car and great team… we will be back stronger and ready to contend! pic.twitter.com/3nVSdY2JiV

The 20-year-old’s racing career began at just four years old when he ran go-karts in Boston. Since then, he’s raced in Bandoleros, the UARA-Stars Series, the Continental Tire SportsCar Challenge, the Rolex 24 Hours of Daytona and even the K&N Pro Series East.

But until 2016, those who only watch NASCAR’s top three series hadn’t heard of him until he made his Gander Outdoors Truck Series debut behind the wheel of the No. 33 Chevrolet for GMS Racing. He posted three top 10s in his nine starts that season.

The following year, he joined the organization full-time, fresh off of GMS winning its first championship with Johnny Sauter. In the season-opener, Grala managed to keep the fenders on his No. 33 Chevrolet and was around at the finish when a multi-truck crash on the final lap propelled this virtual unknown straight to Victory Lane.

After making the playoffs, he didn’t move beyond the first round and ultimately ended the 2017 season seventh in the standings with the lone victory, five top fives and 11 top-10 finishes.

The 2018 season brought a partnership with JGL Racing and an intended full-time schedule, something he never even imagined during his first full season racing trucks.

“I thought I’d spend a couple years in the Truck Series and see if I could get more rides there,” Grala said in a 2018 interview with Frontstretch. “I felt like I still had more to learn there in the trucks, even at the end of the year. But when you get the opportunity to run at the next level, of course, you have to take it.

But the full season schedule didn’t work out and Grala was released from JGL just three months after the season began.

Well, unfortunately I’m out of a ride ? but hopefully the old saying holds true… when one door closes, another opens. I hope to be back in an @XfinityRacing car sometime soon. I love what I do! pic.twitter.com/I1wgT2ZDfl

“Unfortunately, the team owner over there [James Whitener] at JGL was diagnosed with liver failure a couple months ago, and he’s on a transplant list now,” Grala explained in an interview with Frontstretch last May. “So financially, that impacted it. He would have loved to have kept running me, and we left on great terms.”

That’s where Fury Race Cars comes in. After being sidelined with little hope of finding a ride mid-season, the organization, named for Jeff Fultz and Tony Eury Jr., along with Grala’s father, scrambled to put together something to make the next race at Charlotte.

“The goal was I had just lost my ride and this was a last-ditch effort to see if we could save my career and not have me stay off the racetrack for the rest of the season,” he explained with a smile as he recalled the quick success the organization found. “We accomplished exactly what we wanted to. We impressed the right people and were able to get myself some sponsorship and an opportunity in this 21 car. I’m so extremely thankful to everyone that was involved in our program last year and helped this come to fruition.”

In that first race at Charlotte, Grala scored a top 10 and instantly brought more eyes to his efforts, especially given how quickly everything came together for the organization. He ended up running just 12 races with Fury to close out the 2018 season but managed to score four top 10s, including a fifth-place run at Daytona International Speedway in July.

“That was really cool and that was something that was a lot of stress while it was happening,” he said, recalling the whirlwind of getting ready to race at Charlotte Motor Speedway less than two weeks after the JGL ride dissolved. “We were trying to put all of this together and we didn’t know how it was going to go. We didn’t know if we were going to make the race [at Charlotte]. It was quite a gamble on ourselves to go out there and do that and look where it got us. It helped springboard me to this opportunity and that’s what we were shooting for.”

As for the future of his family-owned team? Don’t expect to see it back on track any time soon.

“Fury was a family-owned and operated venture for us,” Grala said. “We didn’t expect Fury to become some long-term powerhouse in the sport. That’s not really what the goal was.”

Instead, any additional sponsorship Grala is able to garner will likely translate into more starts with RCR.

“RCR is an unbelievable program to sell,” he said. “It helps going into conversations with companies saying ‘I’m with Richard Childress Racing.’ They’ve probably heard of it and if they haven’t they’re going to look it up and say ‘Oh, okay, this is serious.’

When he’s not racing, Grala does all he can to remain involved in the sport, even though it’s “bittersweet” when he’s on the sidelines.

“I’m a NASCAR fan; I think we all are,” he said. “I enjoy watching the races, but it’s tough to watch the Xfinity races and know last year I was out there.”

But even though he’s not behind the wheel every week, he’s “really big on being a student of the sport” and said he watches “more hours of video than (he’d) I’d probably like to even talk about and turned more laps on simulators than I care to admit as well” while trying to “come into these races as prepared as possible.

“With only a limited schedule, that allows me the opportunity to spend more time and put more focus on each individual event,” he continued.

Since this weekend’s Xfinity event is the second of four Dash 4 Cash races, there will be no Cup drivers in the field, allowing the series’ talent to steal the spotlight. In his lone start at Richmond last season with JGL, Grala finished 30th, four laps down, but you can expect he’ll run better than that in stronger equipment, assuming he can stay out of any on-track trouble.