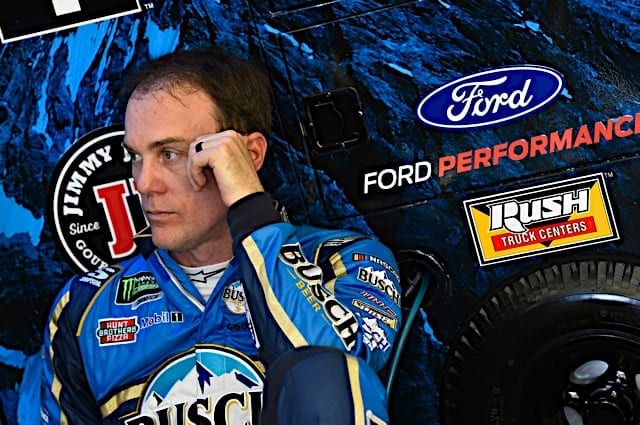 Kevin Harvick has had a very slow start to this season compared to last. After winning eight races in 2018, he has zero so far, with only three top fives and six top 10s in eight races. In fact, the entire Stewart-Haas Racing team has yet to win a race so far this year, though Ford has shown a tremendous amount of strength with Team Penske.

Is there reason for concern for Harvick? Is this just a slow start or does the No. 4 team simply lack the strength that made them so dominant in 2018?

Back in 2016, Bristol Motor Speedway and NASCAR agreed to lay down a tar-like substance called PJ1 on the bottom groove of the track to create a lane down there. It worked and has provided some of the best racing throughout the last three seasons.

Can Bristol produce without laying the PJ1 down or should they continue to utilize this material? What should we say about fans who want the old Bristol configuration back? Is it better this way or not?

Q: What do you make of Kevin Harvick’s season so far? It’s still fairly early but he has not had winning speed like we saw last year, so should we be concerned at all? Ray T., Las Vegas, NV

A: The simple answer to this: We should not be concerned one bit. The No. 4 SHR team has had its share of issues through the first eight races of the season but there is definitely no need to be concerned.

Obviously, the Ford teams have all had speed and run well this season, and that includes Harvick. Let us not forget the issues that came out before the race at Bristol when he failed pre-race inspection three times and was forced to make a pass through on the very first lap, losing multiple laps right away.

Needless to say, it took the team about 475 laps to get on the lead lap to salvage something out of the day. He certainly had a fast racecar, though, at one point driving through the entire field and earning one of his two laps back. He was as much as four laps down during the entire event and recovered to finish 13th. You have to have a very fast car to do that. I would have bet money if he was on the lead lap earlier, that he would have challenged for the win.

I have to imagine that it won’t be very long before we see Harvick and SHR back in Victory Lane. With Joe Gibbs Racing and Team Penske currently shutting everyone else out of Victory Lane, SHR stands as the most consistent threat to both teams. Not to mention that Harvick is one of the best drivers in the series, and is the most likely winless-in-2019 driver to make it back to the winner’s circle.

To call Harvick’s season-to-date a struggle speaks to the high standards this team has set for themselves over the years. Compared to last year, 2019 has so far been a disappointment, but fourth in points with a top-10 finish in all but two races should certainly signify that this team is still capable of contending for and winning races.

Q: After seeing how this past weekend’s Bristol race went, do you think laying down the PJ1 is the best thing for the track to produce the racing we saw? Or do you think somehow, it can be good without it? Tina S., Vancouver, BC, CA

A: The PJ1 compound has produced some great racing since it was first used in 2016. The racing previous to then certainly wasn’t bad but has simply improved since the use of this substance. This was an experiment NASCAR wanted to try for the fall race which happened to be postponed that year to a Sunday afternoon rather than a Saturday night race.

Many fans do not like the “new” Bristol, and would rather see it the way it used to be back in the 90s and 2000s before they built the progressive banking in mid-2007, arguing that a single-groove track produces better racing. While there may be some validity to that, the reality is that there have been some great races at Bristol on the current configuration, too, specifically with the addition of the PJ1.

I do think Bristol could still put on a good show without the PJ1 compound. While I definitely don’t think the racing would be improved from what it is now, the track still has the potential to be exciting. I believe it is best to use the compound to allow for a bottom and top groove. Multi-groove racing puts on the best show, short track or otherwise.

Bristol is one of my favorite tracks personally, and I am always entertained by what I see. Sunday’s race was very entertaining and I believe it will continue to be, as it doesn’t appear any further changes will be made to Bristol anytime soon.

If they had left the track alone they wouldn’t need the sticky stuff.

Here’s an idea, manipulate the cars for better racing.

Should there be any concern on Harvick’s team? Hell yeah if they can’t win without cheating.

Well I notice nobody is mentioning how long his team got away with cheating and wins last year, until a run of the mill inspector at a track noticed something odd and off..and let the proper people know about it. Why is this string of “wins” with nobody catching this blatant cheating ever mentioned?