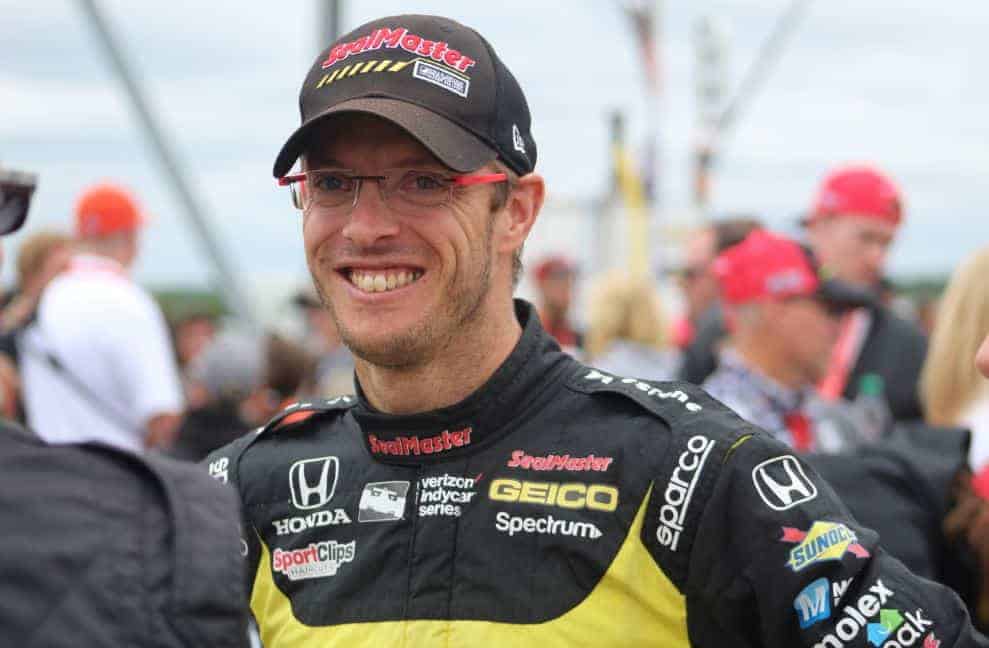 For Sebastien Bourdais, he’s been all over the world in his racing career.  He won the International Formula 3000 Championship in 2001, then came to the United States to dominate Champ Car, winning four championships before leaving to go to Formula 1.  There, he competed for Scuderia Toro Rosso for a year and a half alongside Sebastian Vettel.

Once back in North America, Bourdais joined up part-time with Dale Coyne Racing in 2011, sharing the Boy Scouts of America-sponsored No. 19 with Alex Lloyd.  The experience was quite the adventure.

“It was an extremely challenging year,” Bourdais told Frontstretch in Long Beach.  “When I signed for Dale [Coyne], they had about 10 employees.  By the time the week was over, there were about two left.

“It was a challenging time for Dale Coyne Racing and for me since I was trying to come back from Europe and re-unite with the INDYCAR world.  Things were extremely chaotic and difficult.  We didn’t have anything really between the personnel, the car and the setups.”

Despite this difficulty, Bourdais was able to make the best of it.  After a rough start to the season, he was able to put together five top 10 finishes in the second half of the season.  His best finish was sixth, achieved four times (Toronto, Edmonton, Sonoma and at Twin Ring Motegi in the series’ only race on the circuit’s road course).

After a few years away, Bourdais returned to the team for the 2017 season.  Things are much different at Dale Coyne Racing with Vasser-Sullivan nowadays.

“When I came back in 2017, we made sure that there [was not] going to be a repeat of [2011],” Bourdais continued.  “I brought the people that I had been working with at Newman/Haas [Racing] and KV [Racing] to the team.  They already had a much stronger base at the team at that point, mechanics-wise.  It was mainly reinforcing the engineering department.  The team has grown dramatically since my first experience in 2011.”

The difference was evident right away.  His first race with the organization, Bourdais won from 21st on the grid at St. Petersburg.  He led the points early in the season and was in the hunt for the championship before crashing hard during qualifying for the Indianapolis 500.

At the time, Bourdais was declared out for the season after breaking his pelvis in the crash.  However, he was able to heal up after surgery and returned to the car a little more than three months later at Gateway Motorsports Park.

Today, Bourdais is quite happy to race for Dale Coyne Racing with Vasser-Sullivan.  He is under contract to drive the No. 18 through the end of 2020 and is determined to succeed.

So far in 2019, Bourdais has had an up-and-down season.  Engine issues prevented Bourdais from any chance of a three-peat at St. Petersburg in March, but two consecutive top five finishes have escalated Bourdais up to sixth in points.  He’s quite happy after Sunday’s third-place finish at Barber Motorsports Park.

“The SealMaster No. 18 was pretty strong last weekend,” Bourdais said.  “It was the weekend we were hoping for, which was something smooth, consistent and competitive all [the way] through.  We qualified fifth and were strong contenders in the race.  Couldn’t be much happier with [our form] last week.  Hoping that we can keep the momentum going for this weekend here in Long Beach.”

Luckily, Long Beach has traditionally been a very good track for the veteran racer.  He’s a three-time Grand Prix of Long Beach winner (2005-2007) from his Champ Car days with Newman/Haas Racing.  For those accomplishments, Bourdais (along with Will Power) was inducted into the Long Beach Motorsports Walk of Fame Thursday (April 11).  More recently, Bourdais finished second in 2017 despite having nosing his car into the tires in practice.

Trouble for St. Pete winner @BourdaisOnTrack. In the tires here in practice. pic.twitter.com/Tac42xNqHw

Sunday’s event is not the only event on Bourdais’ schedule this weekend.  Ford Chip Ganassi Racing IMSA’s Joey Hand has come down with a bad case of the flu.  As a result, he is not going to race the No. 66 Ford GT in Saturday’s BUBBA Burger Sports Car Grand Prix at Long Beach.  Bourdais has been tapped to substitute.

Normally, Bourdais drives for the team in longer endurance races.  He was scheduled to race at Daytona, Sebring, Le Mans (in the FIA World Endurance Championship) and Road Atlanta prior to Long Beach being added to the schedule.  Despite his somewhat limited time with the Ford GT, he enjoys it.

“[The Ford GT] is a great car [and] a great program,” Bourdais stated.  “We were very fortunate that we were able to win the class in 2016 on the return [to Le Mans].  We’ll be in the history books forever now, and that’s a pretty cool feeling.

[GT Le Mans] is a tough class with the equivalencies, the BoP (Balance of Performance) and the this and the that.  A bit more politics than we’d like.  [The Ford GT] is a great car that keeps being pegged down for the sake of the show.  To be honest, I dream of being able to drive the car unleashed and just go at it.”

2019 is the final year for the Ford GT program.  As a result, Bourdais has no set program in sports car racing for next season right now.  That said, Bourdais has no desire to stop competing in sports car races.  He feels that a double program between INDYCAR and sports car racing is beneficial.  In addition to being enjoyable, it shortens his offseason.  While the INDYCAR schedule is not as short as it used to be, it still ends in mid-September.  Running the additional races after the INDYCAR season and prior to St. Petersburg keeps Bourdais fresh.

With his open-wheel racing schedule secured through at least 2020, Bourdais’ plan for this weekend is to continue the form that he showed last weekend in Alabama.  Bourdais is currently only 26 points behind Scott Dixon, who is second in points.  That is closer than the distance between Dixon and points leader Josef Newgarden.  Another consistent run on Sunday will go a long way towards helping Bourdais’ championship chances.