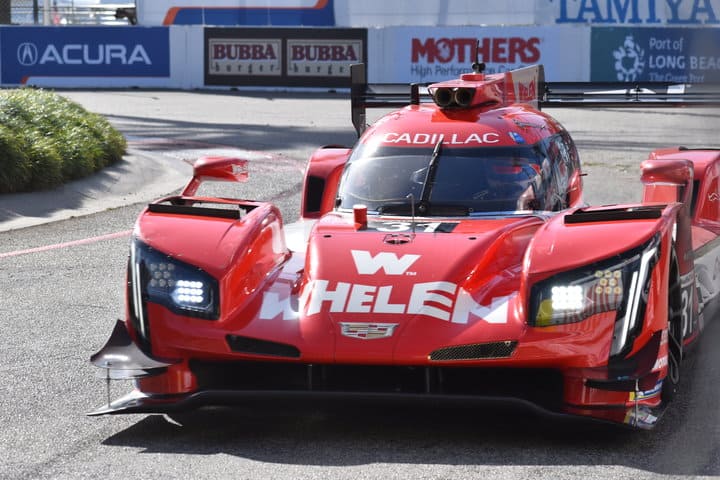 IMSA WeatherTech SportsCar Championship teams had to be ready to go nice and early Friday morning (April 13) for practice at 7:50 a.m. local time.  Action Express Racing’s Felipe Nasr set the fastest lap with a few minutes to go at an average speed of 97.864 mph.

Nasr’s lap was one-seventh of a second faster than Acura Team Penske’s Ricky Taylor, while Juan Pablo Montoya was third in the sister Acura.  Filipe Albuquerque was fourth fastest in the Mustang Sampling-sponsored Cadillac DPi-V.R. for Action Express Racing, while Colin Braun was fifth in the CORE autosport Nissan DPi.

The two-hour session was not far off a worst case scenario for JDC-Miller MotorSports.  Both of their cars caused red flags.  The first came just about halfway through when Misha Goikhberg went off-course at Turn 2.  At the time of his off-course excursion, Goikhberg was third quickest in the session.  Goikhberg ultimately ended up ninth quickest.

Later on in the session, Simon Trummer spun the No. 84 Cadillac and hit the tires in Turn 1.  Both cars were towed back to the paddock, where repairs have commenced.

Wayne Taylor Racing’s No. 10 Cadillac ultimately ended up seventh quickest, but spent the vast majority of the session at the back of the class.  That is because Jordan Taylor spent a decent chunk of his time in the car acclimating himself after having a medical procedure in Hawaii recently.  Eventually, Jordan was able to time in seventh quickest.  IMSA rules for this weekend only require drivers to complete five minutes in the car to earn points, so that could be a consideration for the day.  However, Jordan spent far more than five minutes in the car during the session.

In GT Le Mans, Porsche GT Team topped the charts.  The top spot was swapped multiple times between the two Porsches during the session, but Nick Tandy ended up quickest in the No. 911 with a lap at 91.359 mph.  That lap was a quarter of a second faster than teammate Earl Bamber.  Corvette Racing’s Oliver Gavin was third fastest, followed by BMW Team RLL’s Jesse Krohn.  Antonio Garcia was fifth in the second Corvette.

WeatherTech SportsCar Championship teams have one more practice session scheduled for 7:45 p.m. EDT.  However, that session is what amounts to an elongated qualifying warm-up.  Qualifying itself is scheduled for 8:40 p.m. EDT and will be streamed live at IMSA.com.