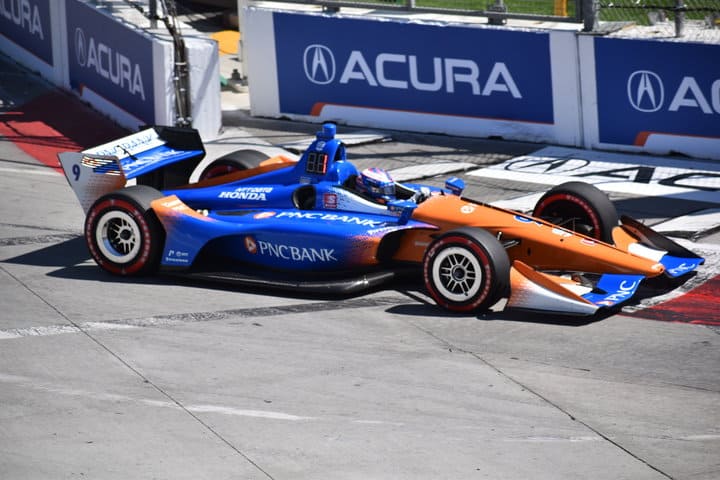 Chip Ganassi Racing’s Scott Dixon put down a flyer in the final minutes of Practice No. 2 to top the speed charts for Friday (April 13) in Long Beach.  Dixon’s quick lap was at an average of 104.505 mph.  This lap was roughly one second off of the current track record.

Early practice sessions at Long Beach are marked by a series of slippery moments.  The track is not necessarily in the best shape for racing.  Alexander Rossi explained as such in a press conference, stating that the track was very, very dirty.

Lap times during the session dropped as much as four seconds for the fastest drivers.  2017 winner James Hinchcliffe put himself on top early on, then Dixon was fastest.  Finally, Andretti Autosport’s Ryan Hunter-Reay set the best lap of the session right near the end at 104.290 mph.

Hunter-Reay’s lap was one-sixth of a second faster than Dixon.  Circuit of the Americas winner Colton Herta was third fastest in his King Taco No. 88, while Graham Rahal was fourth.

Rossi was fifth fastest, but was limited to only five laps in the session, the least of anyone.  This was because he cut a tire and was forced to pit.  Later, Rossi explained that the team felt that he had a good car and that INDYCAR tire allocations in practice are such that it would have hurt the team’s effort to change it and go back out in the session.

In the second session, the track was definitely cleaner, allowing drivers to push harder.  In Dixon’s case, he was really hanging his car out at times.  One at least one occasion, he entered Turn 9 at the end of Seaside Way in a four wheel drift.  Dixon also stated that he “…probably hit the wall three or four times just lightly.”

Driving on the edge of control paid dividends for Dixon as he set the fastest lap of the day on his 16th of 18 laps.  Dixon’s lap was half a tenth of a second faster than Hunter-Reay, while Rosenqvist was third.  Newgarden was fourth, while rookie Patricio O’Ward was a strong fifth for Carlin Racing.

Rossi was sixth fastest, followed by Rahal and Pagenaud.  Hinchcliffe and Marco Andretti were ninth and 10th.  Probably the biggest surprise in the session was how much Power struggled.  He ended up 15th quickest in the session, but was one of the slowest in the session until the final couple of minutes.  Then again, the positions are quite a bit closer than normal.  The entire 23-car field was separated by less than 1.2 seconds.

NTT IndyCar Series teams have one more practice session Saturday in Long Beach.  That session is scheduled for Noon EDT and will be 45 minutes in length.  The session will be streamed via the subscription service NBC Sports Gold.