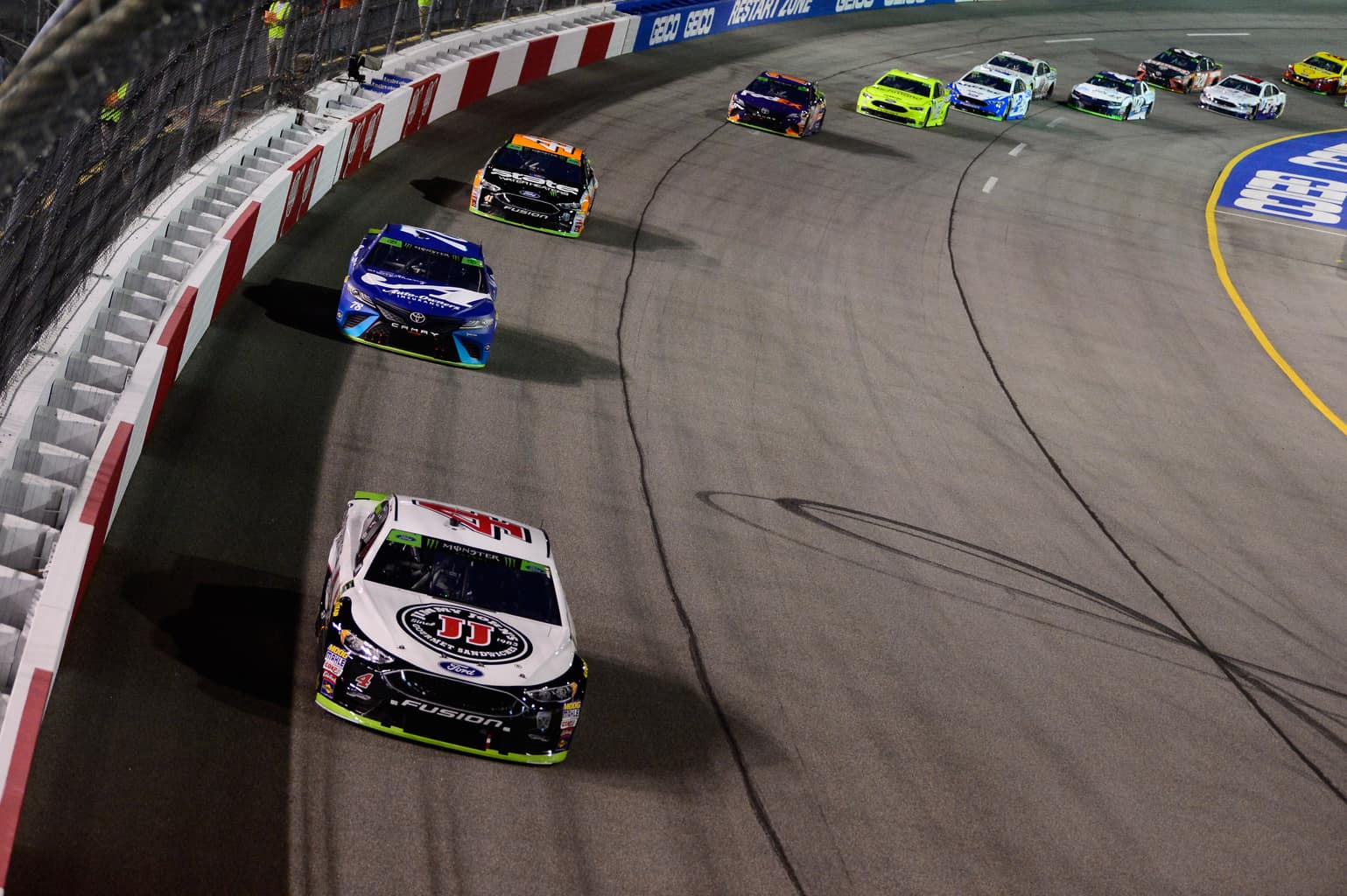 It’s time for the last Monster Energy NASCAR Cup Series race before their spring break. The Toyota Owners 400 at Richmond Raceway will air Saturday, April 13 at 7:30 p.m. ET on FOX. The package at this short track will be the same they ran at Bristol Motor Speedway last week (no aero ducts and higher horsepower).

Seven of the previous nine winners at Richmond started the race within the top 10 (2018 was the exception). Track position is important, then if you want the winner of the race in your lineup. Drivers starting near the front also have a greater chance of leading a good amount of laps, which would give you bonus DraftKings points. It isn’t impossible for a driver to start near the rear and win, as long as they have a fast car; just beware of the risk involved.

This event is an impound race, so be sure to check before the start to see if anyone failed pre-race inspection. If that occurs, your driver’s qualifying time would be disallowed, creating excellent value for your lineup as they would have to come up through the field, scoring bonus points along the way.

Here are my picks for this week!

Kyle Busch has an incredible history at Richmond, as indicated by the stats above.  He won both races last year in convincing fashion. In the spring race, he qualified 32nd and took the checkers! That’s impressive considering our opening note about how difficult it is to win here starting outside the top 10.

Busch has the best average finish here among active drivers. And this time, he starts near the front (fifth place). That gives you the opportunity to lead laps early and earn bonus points for fastest laps run in clean air.

At Bristol last week, Busch definitely did not have the fastest car, but he still won the race. He and his pit crew fought back from a lap 2 spin and wound up victorious through pit strategy. Expect him to have no such problems this time around in running up front early and often Saturday night.

You could also choose one of Busch’s Joe Gibbs Racing teammates, Erik Jones, to save some money for your lineup. Jones starts second Saturday night and also has the opportunity to lead laps. Busch’s younger JGR teammate is riskier than Busch, though due to limited track history. He’s got just four starts here and a mixed bag of results (Jones’ average finish is just 17.0).

Harvick is another expensive driver with good history at Richmond. He hasn’t won since the 2013 spring race but has finished within the top five in seven out of the previous nine races here. The Stewart-Haas Racing driver is in a good position this week to lead many laps after winning the pole. Just keep in mind position differential; you could lose several points if Harvick encounters trouble.

Last week, he qualified 13th, but had to start from the rear of the field and perform a pass-through down pit road because of failing pre-race inspection three times. However, the team found speed last week and Harvick was able to finish where he qualified before the penalty. He also had 82 fastest laps and scored 72 DraftKings points. It’s clear without those consequences Harvick would have been a threat to win the race.

His fellow SHR teammates could also be used in your lineup if needed; they’ve all performed fairly well in previous years at Richmond. Daniel Suarez starts in ninth position, Aric Almirola 15th and Clint Bowyer in 21st. Almirola has the most recent top-five finish among them (fifth last September).

Kyle Busch’s newest JGR teammate could give you bonus points for leading laps, too, as all the Gibbs cars have been quick this year. Truex, still searching for his first career short track win, led over 100 laps in four of the previous six races at Richmond. However, he hasn’t always finished in the top 10 (three of the last six), making him a riskier pick. Providing some bonus points for fastest laps, however, would ease the blow in case of late-race trouble.

This year, Truex earned top 10s in five of the eight races so far, including two top fives. He has yet to win this season and at Richmond, but he’s in position to do so Saturday night if he can outrun his teammate.

Larson was fastest in the first round of qualifying for this race, but didn’t make the second round. However, the drop-off could be because of a rain shower washing away the rubber from the track.

I still like Larson for two reasons. One, he can give you positive place differential points and two, he has a consistent history at Richmond over the past five years. He won the fall 2017 event after starting in fourth place, besting Truex and others late. He’s earned top-10 finishes in four of the previous five races here and never finished worse than 16th in 10 starts.

Larson hasn’t run as well as his fellow teammate Kurt Busch at Chip Ganassi Racing (who starts third). But Richmond is a course that could help him get back on track.

Hamlin was unusually slower than his JGR cohorts in qualifying. But that’s a great opportunity to use him in your lineup and potentially gain positive place differential points. He’s also fairly reasonably priced (especially compared to Kyle Busch). As mentioned previously, the team has been fast all season, so Hamlin can give you bonus points for fastest laps as well. Saturday night will mark the first time all season he’s starting a race outside the top 10.

Hamlin last won the fall 2016 event at Richmond, a race where he qualified on the pole. In six of his past seven starts here, he finished sixth or better. So far in 2019, he hasn’t run worse than 11th, an impressive streak that includes two wins. Hamlin will look to see whether he can keep this streak alive at one of his best tracks.

Some drivers perform well early on in their career at certain tracks while others obtain their victories later on. Johnson is a mixture of both. He last won at Richmond in fall 2008, over 10 years ago, which seems to indicate recent struggles.

However, out of the past nine races here, Johnson has seven top 10s. He has three straight top-10 finishes at this track, in fact, and hopes to score his fourth straight (and possibly fourth win) Saturday night.

Last week in the Food City 500, Johnson scored 35 DraftKings points , which was good value considering his price at the time ($8,000). He has four top-10 finishes this season and Hendrick Motorsports has started to perform better overall.

Looking for a different HMS option? You could also include Chase Elliott in your lineup. He qualified seventh and has good recent history at this track as well (three straight top 10 finishes).

I struggled deciding whether to include Ryan Newman (who qualified 31st) or “DiBurrito,” but settled on DiBenedetto because of his track history and strong performance at Bristol last week. DiBenedetto doesn’t have a great average finish at Richmond, but in the 2018 Toyota Owners 400, he qualified 27th and finished 16th. Where does he start this year? 27th. Perhaps history can repeat itself.

The Leavine Family Racing alliance with JGR has helped DiBenedetto’s performance so far this season. He finished 12th after beginning the race 21st last week and potentially had a strong enough car to finish inside the top 10. He definitely can provide you some good value to fit between someone like Kyle Busch or Harvick in your lineup.

Tifft is mainly a value driver for this race. He did have two top-five finishes in the NASCAR Xfinity Series last season with Richard Childress Racing but the rookie brings no Cup Series experience to the table.

This year, Tifft has typically finished ahead of where he started. But he’s a bit more risky for this race since he qualified a surprising 20th. If the Front Row Motorsports driver can perform as well as he did with RCR in Xfinity, he could still give you a fair amount of DraftKings points, helping you cash in with your contests.