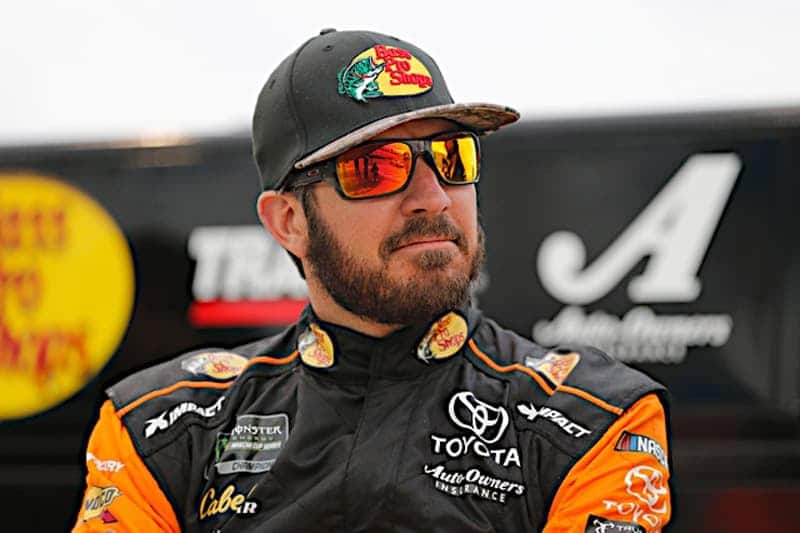 On his 81st short track start in the Monster Energy NASCAR Cup Series, Martin Truex Jr. would not be denied. Truex held off three challengers beating on his rear bumper to score the victory Saturday (April 13) in the 2019 Toyota Owners 400 at Richmond Raceway.

“The short track win, everyone kept asking me when was it going to happen?” Truex said. “Really excited to win here at Richmond.”

It’s the first victory for Truex with his new No. 19 Toyota ride at Joe Gibbs Racing along with crew chief Cole Pearn. He had to earn it, using clean air and every inch of the racetrack to hold off a trio of challengers behind him down the stretch.

“I was struggling the last 40 laps,” he said. “I had no front turn, I just was real real tight the last run. Tonight, we didn’t have the best car but we’ve lost with the best car here plenty of times.”

Joey Logano made a late charge, coming inches from Truex’s rear bumper on the final lap. But another round of contact to match Martinsville Speedway’s finish last fall never happened. The No. 22 Ford ran out of time and space as Logano couldn’t edge to Truex off the last corner.

“Found out something with 10 laps to go to make up some speed,” Logano said, explaining how he sped past Clint Bowyer for second on the outside line. “Got a decent run off of [Turn] 2 at the last lap, thought I could get to the outside but I couldn’t roll the bottom and get off of [Turn] 4. I got tight and I couldn’t turn underneath him.

“Three weeks in a row, I thought we had a car to win the race and we haven’t won. But when you’re frustrated about second, that’s a really good sign of where your team is at.”

Bowyer wound up third after stalking Truex during most of the final 100 laps. Pole sitter Kevin Harvick was fourth while Denny Hamlin, one of eight drivers to fail pre-race inspection, rounded out the top-five finishers.

It was a relatively quiet Richmond race with just two one-car incidents over 400 laps. Kyle Larson and Michael McDowell both wrecked after blown tires, the lone interruptions in what was at times a single-file affair. Passing was difficult as the high-downforce package got cars aero tight behind someone else.

Kyle Busch may have been Truex’s biggest foil. But Busch got a speeding penalty shortly after winning stage one and never recovered. He wound up eighth after leading 101 laps.

With his teammate out of the way, Truex then took control after a back-and-forth battle early on in the final stage with Brad Keselowski. For the fourth time in five races, Truex led the most laps at Richmond, but this time he actually was able to cash in.

“Being out front was important tonight,” he said, crediting the pit crew for a fast final stop. “Everybody at JGR is doing a great job. Just a blessing to drive these race cars.”

Austin Dillon was sixth, followed by Keselowski and Kyle Busch. Ryan Newman and Paul Menard rounded out the top-10 finishers; behind them, just 16 drivers finished on the lead lap.

I guess 16 years in CUP in 486 races people are supposed to say…GOOD JOB, CONGRATS..etc? LOL. Pathetic.

This accomplishment reminds me of MW first Cup win.

Truex and the #19 crew earned last night’s win. Bowyer’s tires gave up the ghost with about 25 laps to go, and Logano might have stolen the win if he’d had three or four more laps. Not the greatest race at Richmond by a long shot, but likewise nowhere near the worst. It’s shaping up to be a season where more drivers than usual could be legitimate title contenders.