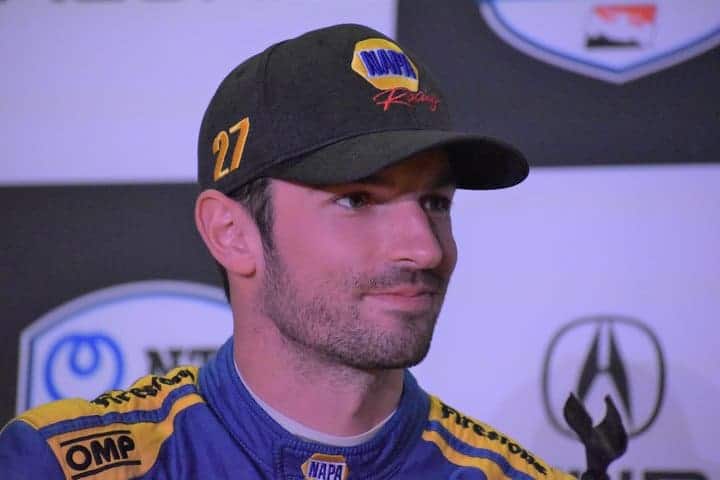 Since the Champ Car/Indy Racing League merger, repeat winners have simply not come to pass in Long Beach.  On Sunday, Alexander Rossi dominated the Acura Grand Prix of Long Beach, leading 80 of the 85 laps to defend his victory from 2018.  He is the first driver to repeat as champion in Long Beach since Sebastien Bourdais won from 2005-2007 when the race was part of the Champ Car World Series.

“Winning the pole [Saturday] was huge,” Rossi said after the race.  “[When I won] the race to Turn 1, it allowed me to control the race from there.  I could run my own strategy at my own pace.  It’s awesome to be able to really kickstart our year.”

Rossi won the pole on Saturday and made great use of it.  Rossi managed to beat Scott Dixon to Turn 1 and assumed the advantage.

Further back, shenanigans broke out in the Fountain Turn as Marcus Ericsson ran in the back of Jack Harvey and deposited him into the flowers, a rather unusual place for a car to end up.  Meanwhile, Spencer Pigot ran in the back of Zach Veach and popped a wheelie.  The car stalled shortly afterwards.  These incidents brought out the only full course yellow of the race.  Everyone involved continued, but all but Veach lost a lap.  Ericsson was judged responsible for the crash and was given a drive-through penalty.

Once the green came back out, Rossi showed that he had the best car by a significant margin.  At times, he was a half-second faster than anyone else on the track.  As a result, the show was effectively stunk up.

Pit stops were the primary way in which Rossi’s competitors could catch up.  He did lose a couple of seconds on the stop, but gained them right back afterwards.  The driver that made serious gains during the first sequence was Josef Newgarden.  A fast in-lap and a fast stop allowed him to move up to second.

Behind Rossi, a fierce battle broke out for third between Dixon, Will Power, Ryan Hunter-Reay and Graham Rahal.  Eventually, Power cracked and went straight at Turn 1.  The mistake dropped him from third to eighth and ended any chance of a podium finish.

As the race continued on, it became more and more clear that no one had anything for Rossi.  After the final stops, Rossi increased his lead by an average of four-tenths of a second per lap for the remainder of the race on his way to an easy win.  Rossi’s margin of victory was 20.2359 seconds over Newgarden.  It is the largest margin of victory for a driver at Long Beach since Al Unser Jr. in 1995.

The last step on the podium ultimately came down to a race between Rahal and Dixon.  Rahal had the spot, but his tires were starting to go off.  On the final lap, Rahal went a little wide exiting Turn 8, giving Dixon an opening.  Rahal then swept to his right in an attempt to block the move.  It was successful and Rahal made it back to the line in third.

Chip Ganassi Racing was not happy with Rahal’s move and requested that the stewards investigate the move.  A few minutes later, the stewards ruled that Rahal’s move was excessive and gave Dixon the final step on the podium.

As a result of the ruling, Rahal had to settle for fourth.  Hunter-Reay dropped back to fifth in the final laps in order to make to the end without a splash of fuel.  Team Penske teammates Simon Pagenaud and Power were sixth and seventh, then Barber Park winner Takuma Sato in eighth.  James Hinchcliffe finished ninth after starting 15th, while Felix Rosenqvist was 10th.  Only 11 drivers were on the lead lap at the finish.

The only driver to fail to finish on Sunday was Circuit of the Americas winner Colton Herta.  Herta was running on the periphery of the top 10 when he lost control in Turn 9.  He overcorrected and shot into the outside wall, damaging the right front corner and ending his day.  No caution was thrown for the incident.

Next up for the NTT IndyCar Series is the Month of May in Indianapolis.  Teams will take a couple of weeks off before returning to the Brickyard for the INDYCAR Grand Prix on the Indianapolis Motor Speedway’s road course on May 11.