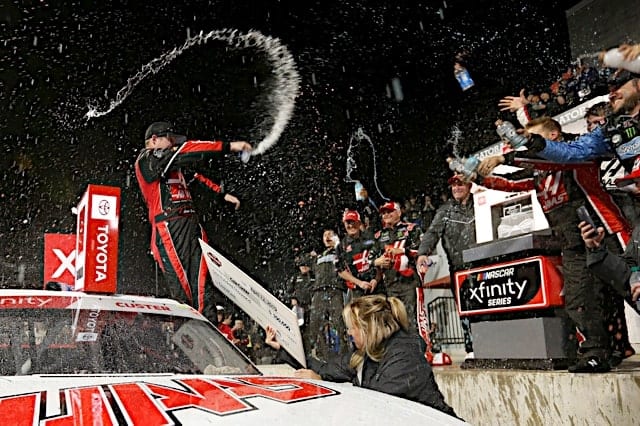 There was no stopping Martin Truex Jr. on Saturday night at Richmond Raceway, as the driver of the No. 19 Toyota held off a fading Clint Bowyer and a hard charging Joey Logano to win his first short track event.

Kyle Busch led early and seemed to be the car to beat. But Busch was hit with a speeding penalty after pit stops and never fully recovered, making his way up to eighth before the laps ran out.

The last 100 laps featured a cat-and-mouse game between Truex and Bowyer, former teammates at Michael Waltrip Racing, as Bowyer seemed to close in some and then fade back. Bowyer drew close and Truex had to adjust, allowing the third-place car of Logano to close in.

The Nos. 19 and 22 cars seemed to be the class of the field after the Busch penalty.

Truex got his first win at a short track after 80 tries, securing a spot in the 2019 playoffs and clinching his first win with Joe Gibbs Racing. The team has won six of the season’s nine races, with Erik Jones the only outlier.

Gibbs is likely the biggest threat to the rest of the field (at least so far). But Team Penske isn’t far behind. – Adam Cheek

It didn’t take long for Custer to capture the lead in the opening stage. However, by the end of the opening 75 circuits, the No. 00 sat third, behind Justin Allgaier and Christopher Bell. But the second stage proved to be the one that Custer put his team into a position to capitalize on the misfortunes of his peers.

Allgaier dominated the majority of stage two. However, on lap 127, Jeremy Clements blew an engine and while most teams elected to pit, the No. 7 car stayed on the track. Allgaier was a sitting duck.

With the inclusion of one additional caution before the stage break, Allgaier dropped to 14th on old tires. Meanwhile, Custer cruised to the stage win as he did the race victory in the final stage.

The victory marks Custer’s second of the season — the first time he’s had multiple victories in a single season in his NASCAR career. Austin Cindric finished second, while Allgaier, Tyler Reddick and Ryan Sieg rounded out the top five.

Alexander Rossi had the exact race he needed on Sunday at the streets of Long Beach. The California native dominated on his way to his second straight Acura Grand Prix of Long Beach victory and forced his way into the forefront of the 2019 NTT IndyCar Series Championship fight.

Rossi drove away from the field and never looked back, leading 80 of 85 laps and taking the checkered flag more than 20 seconds ahead of second place Newgarden. He now sits just 28 points behind the Team Penske driver in the standings.

It’s still early, but after Sunday’s race, the battle for the championship is shaping up to be a fight between the two young Americans. No driver has yet to match Newgarden’s early consistency, but Rossi’s statement drive at one of the biggest events on the calendar signaled to the field that he’s just as much of a threat to take home the crown as Newgarden.

Without an impressive, quality drive to point to before Sunday, going back-to-back at Long Beach could serve as a real jumpstart for Rossi’s championship chase and his month of May. Even with a long break ahead, the Andretti Autosport driver will surely be rolling into the Indianapolis Motor Speedway next month as confident as any other driver in the paddock. – AJ Hecht

Sunday saw the European Le Mans Series (ELMS) open their season at Paul Ricard in France.  Early on, DragonSpeed’s No. 21 ORECA 07-Gibson showed that they were the car to beat.  James Allen turned in the fastest lap of the race early on and opened up a lead after starting fifth.

ELMS races tend to be rather topsy-turvy due to the varying skill sets of the driving lineups and the pit rules.  DragonSpeed swapped the lead back and forth for much of the race with Duqueine Engineering’s similar No. 30.  When Richard Bradley pitted the No. 30 with 28 minutes to go, that gave the lead to Ben Hanley, back in his normal element after running the first two NTT IndyCar Series races earlier this year.  Hanley held on to give himself, Allen and Henrik Hedman the overall victory in the 4 Hours of Le Castellet.

The margin of victory was 16.655 seconds over IDEC Sport’s No. 28 ORECA 07 led by former Rolex Series champion Memo Rojas and Paul-Loup Chatin.  The Duqueine Engineering No. 30 had to settle for third.

The LMP3 class was won by the Ultimate team with Francois Heriau and the Lahaye brothers (Jean-Baptiste and Matthieu) in their Norma M30.  Finally, the GTE class was won by newcomer Luzich Racing with a Ferrari 488 GTE shared by Fabien Lavergne, Nicklas Nielsen and Alessandro Pier Guidi. – Phil Allaway

With the Gander Outdoor Truck Series on a bye week, Harrison Burton thought he had a week off.

Then the call came from Salem, Indiana.

Burton, the son of former NASCAR Cup driver Jeff Burton, finished eighth at Salem on Sunday afternoon after he got the call from Venturini Motorsports to pilot the No. 15 JBL Toyota after Christian Eckes was feeling under the weather. It was reported during the telecast on MAVTV, that Eckes was at an area hotel with flu like symptoms.

After not practicing or qualifying the car, Burton had to start at the tail end of the 18 car field. That did not stop Burton though, as he marched his way up to the top 10.

Before he could get any further, the skies opened up and the rain started falling on lap 97. They ran under caution till lap 101 in which the race became official. They called it soon after they red flagged the event.

Michael Self claimed the checkered flag when the race was called after 101 of 200 laps being completed.

The ARCA Menards Series will have a week off for the Easter Break before they get back going at Talladega. – Bryan Nolen

In what was supposed to be a celebration of Formula One’s 1000th race, Lewis Hamilton used a magnificent start and wheelspin from his Mercedes teammate, Valtteri Bottas, to speed away with the win.  This race lacked any kind of real racing drama as Mercedes never felt threatened.

Even when the team chose to switch from a one-stop to a two-stop strategy, Hamilton’s lead was never in jeopardy and Bottas could easily follow home safely.

Sebastian Vettel arrived in third but not without incident.  During the race Ferrari had told their other driver, Charles Leclerc, to step aside so that Vettel could chase down the Mercedes.  Once in clean air, however, Vettel could do nothing to bring the 13 second gap to a close.

Leclerc would wind up being passed by Red Bull’s Max Verstappen, who took fourth.

The Azerbaijan Grand Prix is next on the schedule in two weeks and already Hamilton holds a 31-point gap over Vettel.  That Mercedes finished first and second, again, also means that they are building toward a nifty constructor’s title margin, and yet the season is just three races old.

For all the expectation surrounding Ferrari, they have failed to put anything together.  Their car is considered to be legitimately faster than Mercedes yet the team has been unable to milk the performance from it, nor been able to situate their drivers into positions that could bring a win.  The Chinese Grand Prix had been thought to be the place where they found their way, and yet they didn’t.  Ava Ladner