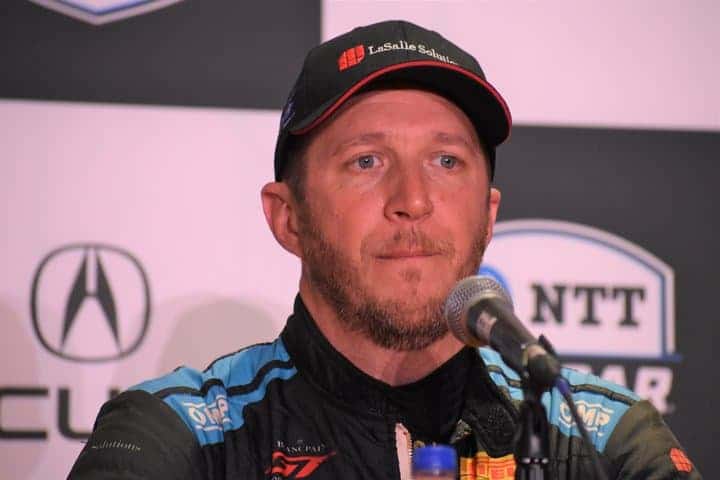 The Racers Group’s Spencer Pumpelly proved that he had the right stuff on Sunday (April 14), leading flag-to-flag in his Porsche to win the third round of the Pirelli GT4 America Sprint season in Long Beach.  He spent the full race with Team Panoz Racing’s Ian James hot on his tail, but he was able to hold off any and all challenges.  That said, Pumpelly is still not necessarily satisfied with his Porsche

“[The race] was sort of a repeat of St. Pete,” Pumpelly said after the race.  “We had a pretty good car right off the bat, but the longer [the race] went green, the more we faded.

“The last couple of laps, I thought I was putting down good [times], but I couldn’t do anything to get away from that sinking feeling that [the Panoz] was getting bigger in my mirrors.  Sure enough, on the last lap, [James] got close enough that I had to go defensive in Turn 9 to hold on.”

Pumpelly started from the pole and used a top speed advantage to beat James to Turn 1.  At that point, Pumpelly was able to open up a gap on James and get as close to comfortable as you can with a small lead.  Further back, Blackdog Speed Shop’s Michael Cooper was making moves.  He was able to get past Nicolai Elghanayan for fourth on the start.  Shortly afterwards, he was able to pass Am-class Matthew Keegan at the Hairpin for third.

Much of the first half of the race was run under caution.  Frank Gannett spun his Ford Mustang GT4 exiting Turn 9 and was hit in the left front corner by the left rear of Michael Dinan‘s Flying Lizard Motorsports Porsche, which brought out the first yellow.  Gannett’s car was completely immobile and out on the spot.

Meanwhile, the contact cut Dinan’s left rear tire.  After limping around the circuit and losing a couple of laps, the Flying Lizard team called it a day.  It had already been a bad weekend for Dinan after he damaged the right rear of the Porsche in the second practice session on Saturday and had to miss qualifying so that the car could be repaired.

On the restart from the first caution, Elghanayan went into Turn 1 a little too quickly and slid into the tires.  Elghanayan’s KTM X-Bow GT4 had some damage to the front end, but managed to back out and drive away under his own power.  The yellow was mainly to fix the tire barrier, which got dislodged.  Elghanayan lost a lap getting repairs to his KTM, but did continue.  He ultimately finished 17th.

When the race finally settled down, Pumpelly and James continued to settle things amongst themselves.  Cooper kept pace for the first couple of laps after the restart, but the lead duo left him in the dust.

Pumpelly never had a lead greater than two seconds over James, but the advantage was comfortable until Pumpelly came across the slower Audi of CJ Moses.  Getting around Moses cost Pumpelly time, which allowed James to move back in on him.  On the final lap, James was right on Pumpelly’s tail on Seaside Way, which forced Pumpelly to take a defensive line.  That move, plus a good run off of the Hairpin, was all Pumpelly needed to take the win.

James was second, followed by Cooper, who was more than six seconds back.  Robinson Racing’s Shane Lewis was fourth, while GMG Racing’s James Sofronas was fifth.

In the Am class, Team Panoz Racing’s Matthew Keegan started from third overall and was never threatened all day.  He was passed by Cooper a couple of laps into the race and held onto fourth for the remainder of the event, more than enough to take the win.

Andretti Autosport’s Jarret Andretti made a move late to end up second, three seconds back.  Drew Staveley came from the rear in his Ford Mustang GT4 to finish third, followed by Alan Brynjolfsson and Samantha Tan.

Pirelli GT4 America Sprint teams will be back in action at VIRginia International Raceway in two weeks.  At VIR, there will be two Sprint races and two SprintX races (combined with GT4 East).  Some of these teams will contest all four races, while others will only do the Sprint races.  All four races will be streamed live at gt4-america.com.