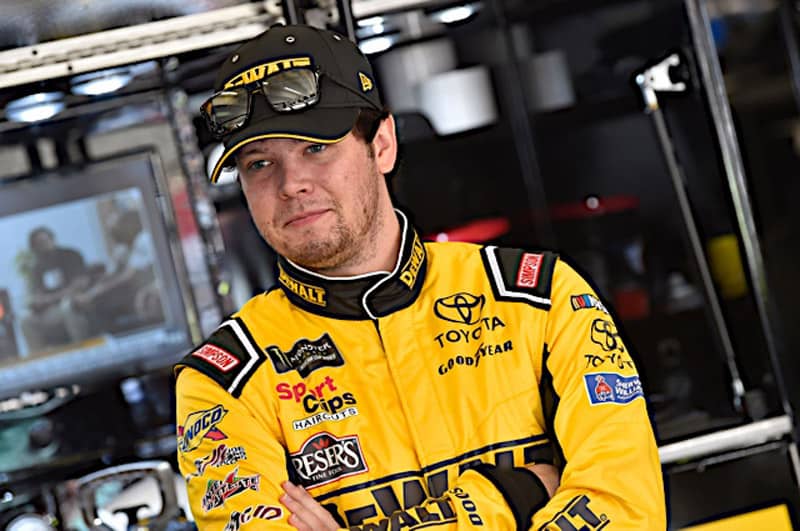 Of the many young, up-and-coming drivers who have ascended through the ranks into the Monster Energy NASCAR Cup Series, Erik Jones may be one of the first that comes to mind.

The driver of the No. 20 Joe Gibbs Racing Toyota has won some of the most prestigious short track races in the country, then a Gander Outdoors NASCAR Truck Series championship. He moved on to win nine NASCAR Xfinity Series races and at Daytona International Speedway in the Cup Series.

You know his accomplishments, but you may not have seen too much of the 22-year-old Jones behind the curtain. Let’s change that. We caught up with Jones at Bristol Motor Speedway to discuss his upbringing, first Cup Series start, social media, his dog Oscar, expectations for 2019, a possible contract extension with JGR and more.

This interview was also featured on Victory Lane.

Davey Segal, Frontstretch: What was it like growing up in Byron, Michigan and what was the race scene surrounding it?

Erik Jones: There wasn’t a whole lot happening in Byron, a town of 400-500 people. I really enjoyed growing up there. I had some friends going to school and kind of knew everybody. It was a really small classroom during the week. I still love going back there and spending time there when I can. The race scene wasn’t huge but it’s probably bigger than most would imagine.

There’s three tracks within 30-45 minutes of my house, which is quite a few. Wausau Speedway, Birch Run Speedway (used to be Dixie Motor Speedway) and Auto City Speedway which is in Flint. Those three places were close and there were actually two go-kart quarter midget tracks within 45 minutes, too. There was a lot of options. It wasn’t far, it was 30 mins just to go to the grocery store for us. It felt like it was pretty close.

Segal: I have a bone to pick with you being a Michigan State graduate. Byron is 10 minutes closer to East Lansing than Ann Arbor is. So why aren’t you a Spartan fan?!

Jones: I grew up and all my friends were Wolverine fans…

Jones: Yeah, most of my family were Wolverine fans.. I have a few alum in my family from Michigan, none from Michigan State. I guess that’s probably what swayed my liking.

Segal: You did some college tours last year with NASCAR, promoting the sport. Do you have any other plans to make it up to the mitten to do some more?

Jones: They’re on the radar, for sure. I hope to make it to Michigan this year and maybe Michigan State at some point. I know a few people that have went to school at MSU, probably a couple that are still there. I’ve never been to MSU before, but been to UM a few times. [It] would be cool to see both.

Segal: I saw this quote on your website: “I’m kind of a reserved guy. I’m really not loud or in your face, that’s not me. Until I get behind the wheel of a race car. Then I’m in your face, then in your mirror, then out front.” That’s a badass quote….

Jones: That’s a combination of things I said, more so than one quote. (Laughs)

Segal: Have you always been that way?

Jones: My whole career in racing, I’ve been like that even before being at the NASCAR level. Growing up, my dad was always a big proponent of not going to the racetrack to make friends. He’s like “we bring our friends with us, but we’re not here to make any along the way.” I’ve carried that same mentality. I’ve got some guys in the garage I’ll say hi to and hang out with sometimes, but for the most part I’m not here to make buddies. I’ve got good friends and we’re here to do business and go to work.

Segal: You have a couple nicknames: Jones Boy and EJ. Which one do you prefer?

Jones: Either one is fine with me, really. I didn’t really have anyone call me EJ until I started getting into NASCAR. That Jones Boy was funny, I enjoy that one. That’s fine that Ken Squier gave me that one. Obviously, a really important figure in the history of NASCAR. I don’t mind either one.

Segal: When did you find out how big of a thing that nickname became?

Jones: I was riding home with a couple of friends from Darlington [Raceway], and we obviously drive, it’s not too far. My buddies got in the car with me and I made one of them drive, I didn’t want to drive. He said something about “That Jones Boy” or called me that, and I was like “what do you mean?” This is probably a good 30, 45 minutes into our drive home. They kind of explained it to me, then I went on social media and looked it all up and got the gist of it. It was a good subject for the rest of the ride home and they picked on me for the next couple days.

Segal: You had an interesting Cup debut. What do you remember about your first race weekend filling in for Kyle Busch at Kansas Speedway (2015)?

Jones: I wasn’t really sure going into it what to expect. I was 18 years old, I had won some Truck races, I think I’d only won one Xfinity race at that point. Only started a handful of them. It was kind of a trial by fire deal. But it was fun, I didn’t really have any expectations going in. The package at that time was really similar to the Xfinity cars, so I was able to take that stuff over. It was just a really cool weekend. I wasn’t expecting to run it, so it was laid back, no expectations.

Segal: The world kind of got introduced to you in 2012 at the Snowball Derby when you beat Kyle Busch. And your career took off from there…

Jones: It was a turning point for me in my racing career. I was 16 years old and it gave me a lot of opportunities I never thought I’d have. I didn’t think I was going to be able to get with a top three team in the Truck Series. Immediately, when we got in, Kyle Busch Motorsports was right on the cusp of having some good equipment and really getting their stuff to form where it needed to be. We were able to capitalize, win a race and get some more opportunities after that.

Segal: You bring your dog Oscar everywhere, don’t you?

Jones: He doesn’t miss much. He doesn’t go out west, it’s a long day of travel for him but he gets to mostly all of them. He’s here this weekend, Richmond, then he’ll go home with me to Michigan for Easter, he’s kind of all over the place.

Segal: You recently made your broadcasting debut, but people weren’t talking about the booth. They were talking about your hair. You don’t mind that though, do you?

Jones: I didn’t really mind it, it doesn’t bother me. Most people like to have something to pick on. I enjoyed it, broadcasting isn’t something I think I’d want to do all the time, at least not at this point in my career in my life. But I don’t think I can see myself doing it all the time.

Segal: You’re an underrated Twitter follow. Your play by play for the Truck race at Daytona was hilarious. How do you feel about social media?

Jones: It goes both ways. It’s really easy to make a good play on things and have fun, but it’s really easy to make it a negative and a bad influence on anybody. I think when you get in those situations, it can be a really fun and unique time with it. I was hanging out with a bunch of my friends at a beach house watching the race.

Segal: You guys were saying what everyone else was thinking….

Jones: We were dying laughing watching a lot of the stuff go on. There were so many things happening that were getting us rolling so I had to express that to everybody.

Segal: You have a contract extension in the works with Joe Gibbs Racing. How much are you allowed to say regarding the ongoing talks?

Jones: I built a good relationship with JGR and I think we’ve done a really good job with the No. 20 team the last year-and-a-half getting it to a point where we want it to be. Me and Chris Gayle [crew chief] making it our own deal, and who we want to have involved on the team and pit crew side.

It’s really been a good improvement. I’m happy with where we’re at, I’m happy being with Joe Gibbs Racing. For my age, I’ve had a pretty longstanding relationship with them. I hope to continue that and I feel like we’re definitely moving in the right direction.

Segal: What are realistic expectations for this season?

Jones: If we miss the playoffs, that’s definitely not something we should be doing. We should easily make the playoffs and I’d love to advance to the Round of 8. That’s our ultimate goal, to have the shot to make it to Homestead. That’s what everybody wants. If you can make it to that Round of 8, you never know what’s going to happen. You saw it last year with the No. 22 (Joey Logano) winning at Martinsville and making it to Homestead and making it all happen. You never know how it’s going to play out with this format. For us, winning a couple races is not too far out there at all. We’re really close, I feel like, to busting a few off.