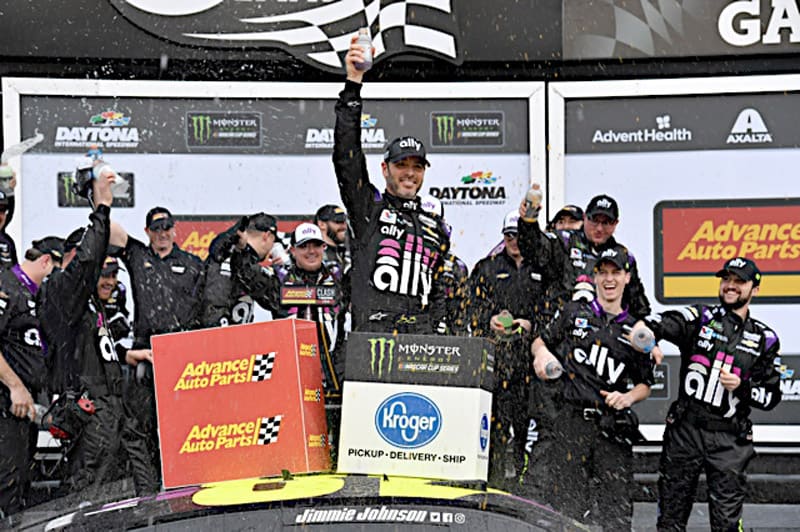 It has been 277 races since Menard last won a Monster Energy NASCAR Cup Series race. Driving the No. 27 Richard Childress Racing Chevrolet, Paul Menard won the 2011 Brickyard 400 at Indianapolis Motor Speedway. In that race, he led 27 laps and stretched the fuel in his No. 27 Chevrolet to win his first career Cup Series race by a 0.725-seconds margin over Jeff Gordon. The 2011 Brickyard 400 remains the lone Monster Energy NASCAR Cup Series win of Paul Menard’s career.

Since that day, Menard has won two NASCAR Xfinity Series races. He won the 2014 Olle’s Bargain Outlet 250 at Michigan International Speedway and the 2015 Road America 180 at Road America. Menard won both races driving the No. 33 Richard Childress Racing Chevrolet.

Now, Menard drives the No. 21 Wood Brothers Racing Ford. If Menard wins at Indianapolis Motor Speedway again, he will likely make the playoffs in the final race of the Cup Series regular season (provided there aren’t over 16 winners by that point). Wood Brothers Racing usually brings fast Fords to the superspeedways. The team won the 2011 Daytona 500 with Trevor Bayne behind the wheel.

Menard was competitive in the Advance Auto Parts Clash before a last-lap crash ended his race. With their alliance with Team Penske, expect Wood Brothers Racing and Menard to contend for a win this season.

We’re one race away from Ragan having a six-season winless streak to his name. Ragan has not won a Cup Series race in 215 races. He last won the 2013 Aaron’s 499 at Talladega Superspeedway. Driving the No. 34 Ford, he gave Front Row Motorsports its first Monster Energy NASCAR Cup Series victory. Ragan led four laps, receiving a push from then-teammate David Gilliland, who helped give Front Row Motorsports a 1-2 finish. The team’s third driver, Josh Wise, finished on the lead lap in 19th place, so the Aaron’s 499 was an outstanding race for the whole organization.

Both of Ragans’ career victories came at superspeedways. His first win came at Daytona International Speedway, and his last win is his most recent. Front Row Motorsports has won two races, but the team works hard to compete at the superspeedways. Now driving the No. 38 Front Row Motorsports Ford, Ragan would like to end his winless streak and give the team their second ever playoff berth.

With his lone Monster Energy NASCAR Cup Series victory, Buescher became the first and only Front Row Motorsports driver to make the playoffs. For Buescher, that was 96 races ago in a weather-shortened race. Driving the No. 34 Front Row Motorsports Ford, he won the 2016 Pennsylvania 400 at Pocono Raceway.

The 2016 Pennsylvania 400 was plagued by Mother Nature all race weekend. The race was postponed from Sunday to Monday due to rain, but the weather on Monday wasn’t much better.

Following the 2016 NASCAR season, Chris Buescher joined JTG Daugherty Racing to drive the No. 37 Chevrolet. While the team hasn’t broken through to Victory Lane yet with Buescher, or his rookie teammate Ryan Preece, they were the top underdog team in the Toyota Owners 400, and Buescher and Preece are 23rd and 25th in the point standings, respectively. With the increasing improvements at JTG Daugherty Racing, Buescher hopes to end his winless drought sooner rather than later.

77 races ago, Ryan Newman parked his No. 31 Richard Childress Racing Chevrolet in Victory Lane. After a caution with less than 10 laps left to go in the 2017 Camping World 500 at ISM Raceway, all but three lead lap cars pitted. Newman, Ricky Stenhouse Jr. and Truex elected to stay out on older tires. Holding off those two drivers along with the other lead lap cars, who had new tires, Newman won at ISM Raceway. It was his 18th career Monster Energy NASCAR Cup Series win.

With that victory, Newman clinched his playoff berth. Yet he failed to advance out of the Round of 16, and Newman finished in 16th place overall. The following season, last year, Newman failed to achieve any top-five finishes, and he finished 17th in the point standings.

Newman became the driver of the No. 6 Roush Fenway Racing Ford for the 2019 season. He has not accrued any playoff points yet, but is 15th in the standings, albeit only four points ahead of the playoff cut line.

To ensure he makes the playoffs, the new RFR driver wants to return to Victory Lane as does RFR.

How is it a seven-time Monster Energy NASCAR Cup Series driver could be on the list on drivers who are enduring a lengthy winless streak? Hendrick Motorsports noted Johnsons’ struggles by replacing crew chief Chad Knaus with Kevin Meendering. Although he won the Advance Auto Parts Clash at Daytona International Speedway, he has not won a points race since June 4, 2017.

Yes, Johnson has not celebrated a Monster Energy NASCAR Cup Series win in 68 races. His last win came in the 2017 AAA 400 at Dover International Speedway. Johnson led seven laps and beat Kyle Larson on the final restart in overtime to win his 83rd Cup Series race. With that victory, he tied NASCAR Hall of Famer Cale Yarborough for sixth place on the all-time Monster Energy NASCAR Cup Series win list. It was a historic feat for the driver of the No. 48 team.

Where will Johnson overtake Cale Yarborough and subsequently tie NASCAR Hall of Famers Bobby Allison and Darrell Waltrip for fourth place as the winningest driver in NASCAR’s top series?

Of the next four races on the Cup Series schedule, Johnson has won at all four tracks. He has two wins at Talladega Superspeedway, 11 at Dover International Speedway, three at Kansas Speedway and eight at Charlotte Motor Speedway. He has dominated at both Dover and Charlotte. In 34 career starts at Dover, he has 24 top-10 finishes. Likewise, at Charlotte, he has 21 top-10 finishes in 34 career starts there.

Will Johnson win the first race for Hendrick Motorsports this season? The seven-time champ is too good of a driver, Hendrick Motorsports has the best Chevrolet equipment, and Johnson knows how to win. Mark it down, I predict he will win the Coca-Cola 600 on Memorial Day weekend.

Jimmie has never been able to drive a lighter car with lower horsepower, never. I’ve been telling y’all for two years that Jimmie has won his last race in NASCAR. As bad as I want him to pass DW it just won’t happen. NASCAR found a way to stop him, it’s over.

Looks like the “What’s wrong with Jimmie Johnson?” articles have dried up and it’s time for the “Could Johnson have won anything without the help?” articles.