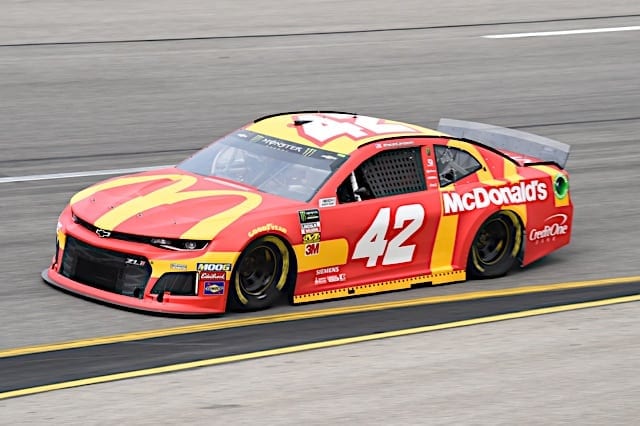 Saturday night’s Monster Energy NASCAR Cup Series race at Richmond Raceway wasn’t a thrill ride for most of the race, but the ending provided a lot of drama in the final 30 or so laps of the Toyota Owners 400, even though the answers mostly stayed the same.

Would Joe Gibbs Racing’s Martin Truex Jr be able to finally win at a short track? (Ultimately, yes.) Would Stewart-Haas Racing’s Clint Bowyer be able to catch his former teammate? (Nope.) Was everyone else constantly reminded of Spingate, which happened at the same track five-and-a-half years earlier? (Of course.) If Team Penske’s Joey Logano got to Truex’s bumper, would he shove him out of the way again like Martinsville last fall? (Maybe, but there weren’t enough laps to be sure.)

The Cup Series is now officially one-quarter of the way through 2019, as this was the ninth race of 36 total.

JGR’s Denny Hamlin is having a fantastic start to his season. At one of his home tracks, the veteran scored a fifth-place result, his eighth top 10 in nine races. He also has two wins, a stage win, six top-fives and no finish worse than his car number – which is No. 11.

It’s still early in the season, but performance-wise, Chip Ganassi Racing’s Kyle Larson has fallen off a cliff. He’s managed just two top-10 finishes through nine races, crashed out in two of the past three events (earning last place both times), and has an average result of 18th.  His best finish was sixth at ISM Raceway, and the only track he’s led laps at in 2019 was Atlanta. If the playoffs started today, the No. 42 wouldn’t be a part of them, as Larson is 19th in the standings.

Kevin Harvick matched his car number – which is No. 4, by the way – yet again in 2019, the fourth time this season that’s happened for the SHR driver. The former series champion has an average finish of 8.7 to go along with five top fives, seven top-10s, two stage wins and two poles through nine races.

The highlight of Michael McDowell‘s season so far was running fifth in the Daytona 500, where he was immediately chewed out by Logano. From there, things have gone downhill for the Front Row Motorsports driver, to the point of getting involved in a post-qualifying wrestling match with Daniel Suarez at Phoenix. The No. 34 has only two credited DNFs this season, one of them coming on Saturday night, but there have been five finishes of 30th or worse, which has McDowell 29th in the standings out of 37 drivers.

Logano’s teammate Brad Keselowski is doing pretty well this year, too, with victories at Atlanta and Martinsville. He has two stage wins, four top-fives and five top 10s through nine races after finishing seventh Saturday night. He’s also pretty good at the next track on the schedule.

Richmond does not agree with Ryan Blaney. In seven Cup Series starts, the driver of the No. 12 has a best finish of 18th. He was 25th on Saturday night, slightly better than his track average result of 26.7.

In the Xfinity Series, however, it’s a different story. Blaney has top 10s in all five Richmond starts going back to 2012. The good news is that Blaney’s still easily within the 2019 Cup Series playoff bubble at ninth in the standings, and Team Penske is very fast at Talladega.

This week the Paint Scheme of the Week goes to the MBM Motorsports No. 66 Toyota Camry, which was piloted by Joey Gase. It wasn’t that amazing to look at on TV or from the stands, looking like a spectacularly disastrous attempt at homemade camo. But in still photos or close-up video, you could see that the crazy patchwork was all artwork and paint scheme designs created by artist Sam Bass, who passed away recently. Bass was the man responsible for many classic paint schemes throughout NASCAR’s history, including Kyle Petty’s Days of Thunder Mello Yello No. 42, Jeff Gordon’s Rainbow Warrior No. 24 from the 1990s and Gordon’s 2000s flaming design.

It was a very neat way to remember an important player in the sport’s history.

The Twitter accounts for Roush Fenway Racing and Richmond Raceway had a lot of mutual joyfulness going on. Even Friends GIFs of Phoebe spazzing were involved.

Wood Brothers Racing notched a top-10 finish with Paul Menard driving the highlighter yellow No. 21 to a 10th-place finish. Their Twitter feed was ecstatic with that placement, given the team’s bad luck to start the season. Even better for them, Menard would be in the playoffs if the playoffs started today.

E-X-T-R-E-M-E-L-Y HAPPY with this 10th place finish. totally earned this one. pit crew was absolutely flawless. Greg called a killer race and Paul kept his head, drove a great race and this was just exactly what we needed.

TV reporter Jamie Little got a warm welcome from her Golden Retriever when she got home on Sunday.

No one will be victorious in any of the MENCS, Xfinity Series or Gander Outdoors Truck Series, because all three are off this weekend because of Easter.

The MENCS and Xfinity Series next race deep in Alabama on April 27-28 at Talladega Superspeedway.

On Saturday (1 p.m. ET on Fox Sports 1), at least one underdog gets a top-five finish, while Noah Gragson will survive the chaos and lock himself into the playoffs after the MoneyLion 300 win.

In the Cup Series, the winner of Sunday’s GEICO 500 will be a a JTG-Daugherty Racing driver, I’m going to guess, after most of the field is taken out by crash damage. The race will go green at 2 p.m. ET, with TV coverage on Fox.