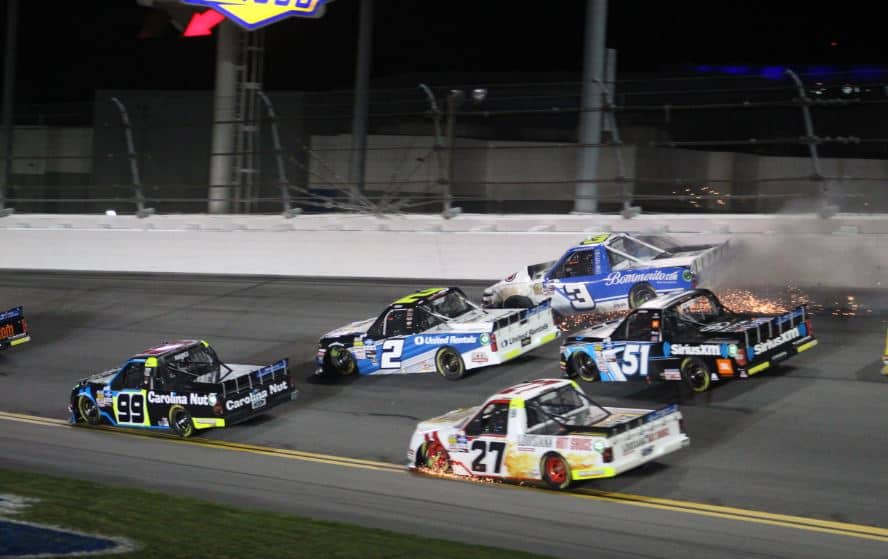 The 2019 season marks the 25th year for the Gander Outdoors Truck Series. While it’s arguably the best racing each and every weekend it races, the series is far less tenured than both the Monster Energy NASCAR Cup and Xfinity series.  That doesn’t mean it doesn’t have its own rich history.

As I did some digging to find out more about the origins of the Truck Series, I discovered that the idea of racing trucks sparked actually more than a decade before the series debuted. In fact, Buck Baker (yes that Buck Baker) hosted the All-American Pickup Truck 200 at North Carolina Motor Speedway, better known to younger fans as Rockingham Speedway, on June 5, 1983. According to the story that ran in the Wilmington Morning Star, Baker founded the National Pickup Truck Association and decided on racing trucks “to give graduates of his race driving school a place to practice their newly learned craft.”

That inaugural race, which featured just nine trucks running the same motors the Grand National Series ran, with additional restrictions, turned out to be a hit despite a heavy rainstorm that delayed the finish by a couple of hours. In fact, the majority of the approximately 6,500 fans stuck out the storm and were there until the end.

Though Baker had found success in the Cup Series with two championships and 46 wins in 635 starts, NASCAR remained only in an “advisory capacity.”

“NASCAR is aware of what we’re doing,” Baker explained. “I sent them the message that I didn’t want them to be the last to find out about it. They have been instrumental in a lot of things that have been done.”

The story goes that Baker attempted to sell his series to NASCAR at the end of the first season but was shot down. Instead, he it sold to Bob Harmon, according to a story on Racer’s Reunion. Harmon received sponsorship from Dick Moroso, who renamed it the Moroso Performance All-Pro Pickup Truck Series in 1984. At the end of that season, Harmon, battling significant health issues, handed over the series to others, who ultimately ended up shutting it down.

Fast forward to 1991 when the idea of running a Truck Series in NASCAR was presented but still did not come to fruition. Four businessmen and off-road racing enthusiasts – Jim Venable, Jim Smith, Dick Landfield and Frank “Scoop” Vessels – were concerned about the future of desert racing and were “looking for a way to take our show on the road,” Venable told the Seattle Times in 1995.

But that wasn’t the end of it. In May 1994, NASCAR announced the series would get its start the following season, but first, a few exhibition races were held.

The first Truck Series race was the Mesa Marin 20 on July 30, 1994. The 20-lap exhibition race was called “just a glimpse of what will be a national touring series in 1995,” by Dennis Huth, one of the people responsible for the birth of the current series.

The race, which took just seven minutes to complete, was won by P.J. Jones, who received $900 in prize money, while the rest of the five driver field (Gary Collins, Rob MacCachren, Craig Huartson and Dave Ashley) were each awarded $800. There were just three more exhibition races in 1994, with the final one held at Tucson Raceway Park in Arizona. Providing a glimpse into the future, that event was won by then two-time Featherlite champion Ron Hornaday Jr.

With the success of the four exhibition races, Huth and Brian France were given the task of planning 3 more races at Tucson over the winter of 1994-95. These would be “full-fledged” races with larger fields and more laps. These 200-lap races also featured a 10-minute break halfway through the event so crews could adjust their trucks. As the races became longer and the fields became larger, both the success of the races and a growing fan base were taking root.

On Feb. 5, 1995, the Gander Outdoors Truck Series made its official debut as the SuperTruck Series with the GM Goodwrench 200 at Phoenix International Raceway. The field consisted of 33 trucks: 17 Fords, 13 Chevys and three Dodges. Mike Skinner, driving the No. 3 Richard Childress-owned Chevrolet started near the back but won by a margin of just 0.09 seconds. Skinner took the truck, painted to imitate Dale Earnhardt’s Monster Energy NASCAR Cup Series car, to Victory Lane seven more times that season en route to the inaugural series championship.

The following year, Craftsman joined the series, and it was renamed the Craftsman Truck Series.

In late 2007, NASCAR announced it had begun shopping for a new title sponsor to replace Craftsman after Sear’s planned to end its backing of the series at the end of the 2008 season.

“Craftsman has been the sponsor of the NASCAR Craftsman Truck Series since its inception in 1995, and since then, we have developed strong relationships with millions of loyal NASCAR fans we value greatly,” Scott Howard, manager of marketing partnerships for Sears, said at the time of the announcement. “While we will be relinquishing title sponsorship of the NASCAR Craftsman Truck Series at the end of 2008, we continue to explore new opportunities within NASCAR.”

Enter Camping World. The company signed on for a seven-year partnership as title sponsor for the series and the Camping World Truck Series was born.

“Camping World has a strong affinity with NASCAR fans, and we’re thrilled to be the primary sponsor in NASCAR’s Truck Series,” Camping World chairman and CEO Marcus Lemonis said at the time. “With the state of the current economy, Camping World’s main objective is to communicate our brand in the most cost-effective manner and to promote affordable, family fun.

“Additionally, we feel strongly that this sponsorship will dramatically increase our customer base in experiencing our entire product offering. We expect this relationship to not only benefit the teams and fans, but we will put a special emphasis on supporting the four auto manufacturers in selling more trucks and the Truck Series sponsors to yield the same return on investment that we’ve enjoyed. Camping World will work diligently to promote the four manufacturers and team sponsors by positioning them as preferred product providers to the four million RV enthusiasts we currently serve.”

Additionally, Lemonis seems to have become a huge fan of the series, as you can tell by his posts about the series and these two commands given several years apart.

About one-third of the way through last season, NASCAR and Camping World announced a title sponsor change to Gander Outdoors, a subsidiary of Camping World.

At the time when the inaugural season ran, no one knew for sure what the future might be for this new NASCAR venture, but I’m sure they were hopeful it would continue. Whether anyone expected it to last this long is anyone’s guess.

With that said, 25 years after its inaugural season, today’s Truck Series is often more compelling than the rest of the race weekend. There have been prior concerns about the health of the series, and while teams have come and gone throughout the years, things are once again on the rise.

The 2018 season was the first since 2005 to put a full field on the track for every single race on the schedule, and while it’s not a guarantee that it will translate into a long-term rise in the health of the series, it’s definitely a promising sign that leaves anyone who loves the series with a hopeful heart.

For the most part, the Truck Series serves as a step (no matter how small a step it might be) on the developmental ladder in NASCAR. How drivers move up that ladder is a whole different debate for another day. But with that said, a small group of competitors has made the series home for themselves in recent years. Add in a handful of Cup drivers sprinkled in throughout the 23-race schedule and there’s really something for everyone.

We’re five races into the Truck Series’ 25th season, and here’s to at least 25 more.

those 4 early exhibition “races” were a joke. It was cool to see, but there wasn’t much racing there. I was at the Tucson one where Ron Hornaday, Jr. absolutely dominated the race- as he was a local track favorite. There was more talk of the WWE running the show than NASCAR…

I was there when this series was formally announced at Sears Point (aka Sonoma Raceway). Originally the idea seemed to be that this series would be a low-cost series that could run on a collection of short tracks to provide NASCAR racing to fans who were unable to attend the Wisnton Cup and/or Busch Series races on the bigger ovals. As part of the cost-cutting — and to make this series workable at short tracks that lacked adequate pit lane design — they set up the pit stop procedure that did allowed pit crews to take all the time they needed before the field was reorganized and green flagged off again. I was never convinced that it was a good idea to move this series tot he big ovals and to make it just another of the superspeedway races, leaving the other short tracks that might have benefited out in the cold.