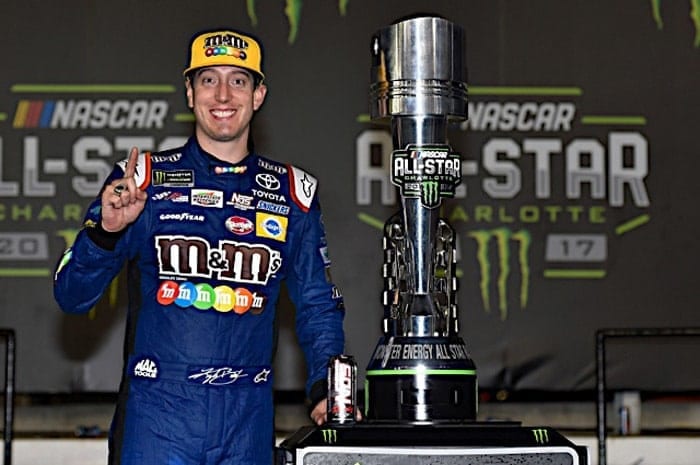 I confess that I’ve spent the better part of this week removed from the racing world. Only occasional motorsports stories like the rules package with potential elements of the 2021 Monster Energy NASCAR Cup Series car being utilized in the upcoming Monster Energy All-Star Race have caught my eye for more than a fleeting glance.

With most of the sport’s top tours taking the Easter holiday off, this quiet week has provided an opportunity to step away and check out the goings on of other parts of the world, from the Mueller report to the final season of Game of Thrones.

I’ve dabbled in a bit of everything, but the most consistently entertaining and time-consuming thing I’ve observed during the time has been the first round of the NBA playoffs.

From the standard physical, intense games to unique moments like the Los Angeles Clippers’ 31-point comeback in game two of their series with the Golden State Warriors, each game has provided a unique vibe and storyline. The basics of the sport haven’t changed at any point during the postseason, but the ebbs and flows that each team encounters when facing the same opponent for a week straight have led to changes and swings that make each battle feel unique and fresh — a feature that’s made the sport easy to follow.

At its best, auto racing feels the same way. The various racetracks on each tour provide unique races each week, and a host of different teams and drivers make their way to the front of the field to contend for victories.

NASCAR trades off between short-track action at Martinsville Speedway and high-speed pack racing at Daytona International Speedway and Talladega Superspeedway. IndyCar drivers test their mettle on the tight street circuits like Long Beach and their bravery at ovals like Indianapolis Motor Speedway and Pocono Raceway. Formula 1 mixes in a beloved road course in Spa-Francorchamps with a tight street circuit in Baku.

Drivers and teams sometimes dominate for stretches at a time — see Mercedes, Joe Gibbs Racing and Team Penske for current examples. But traditionally a few or even many others rise up to challenge the top teams, stealing wins either with impressive speed (Max Verstappen, Mexico 2018), unique strategy (Austin Dillon, Charlotte 2017) and/or a stroke of luck (Chris Buescher‘s foggy Pocono surprise in 2016 comes to mind).

Racing is at its strongest when there’s a layer of unpredictability. No two tracks should feel exactly alike, and tracks with more than one date for the same tour should have different circumstances play out in each event.

That’s something Charlotte Motor Speedway has struggled with at times, and it’s why the All-Star Race serving essentially as a test race for the Cup Series makes perfect sense.

For many years, the All-Star Race was in a category just below the top races in all of NASCAR. It never carried quite the same prestige as the Daytona 500 or Southern 500. But with the unique sprint-like format, difficult qualifying rules and large prize money to race for, the exhibition spent its early years as a spotlight event that many looked forward to each year.

Serving as a perfect counterpart to the following week’s Coca-Cola 600 — NASCAR’s closest thing to an endurance race — the All-Star Race provided some of the sport’s top stories during its first two decades. The race saw the Pass in the Grass when Dale Earnhardt won in 1987. Darrell Waltrip famously hoped Rusty Wallace choked on the prize money after he was spun at the end of the 1989 event. One Hot Night electrified the racing world in 1992, and Dale Earnhardt Jr. shocked the field to win as a rookie in 2000.

The 2000s saw a few more storylines — Jeff Gordon’s crash-and-win night in 2001, the Busch brothers wrecking in 2007 and Kasey Kahne’s win after qualifying through the fan vote in 2008 among them. But over time the event began to grow stale.

Over the past 20 years, the feel-good moments and excitement surrounding NASCAR’s two-week stint in Charlotte have become slightly sullied by talks of aerodynamic dependency and an overall public disdain for 1.5-mile tracks. Some have called for the All-Star Race to be moved, while other pitched a host of ideas to try to revitalize the event.

NASCAR and Charlotte have responded to the criticism in recent years by throwing different ideas at the race, altering the race format, adding in a softer option tire akin to reds in IndyCar and F1 and, most recently, trying out a variation of the rules package being considered for 2019.

That’s the approach the sanctioning body should continue with moving forward.

The odds of every race turning into a pleasant experience like 2018 was are slim, but in making a rules package switch for the event each year NASCAR provides itself an opportunity to gauge potential vehicle improvements without the risks associated with a  regular season points race.

Fans are given an event with at at least a basic level of unpredictability, and Charlotte is left with three dates on the Cup schedule that all carry different vibes — new-look cars in the All-Star Race, a classic endurance race in the Coca-Cola 600 and a playoff wild card in the fall’s ROVAL race.

There are other potential solutions that could fix the All-Star Race if needed. Elements of the race could be altered, as could the actual track on which the event is contested. NASCAR could probably even do away with exhibition races like the Clash and the All-Star Race without facing severe backlash.

But if the All-Star Race is going to continue in Charlotte, using the short race as a potential look to the future of the sport each year is a fair compromise that might just keep it worthwhile for fans and teams.

Take it to the dirt track. If the Dirt Modifieds (Barefoot Bob and Dr. J et al} can run at Cayuga the Cup cars can run on the dirt track at Charlotte.

I think Eldora would be the perfect place for such an event.