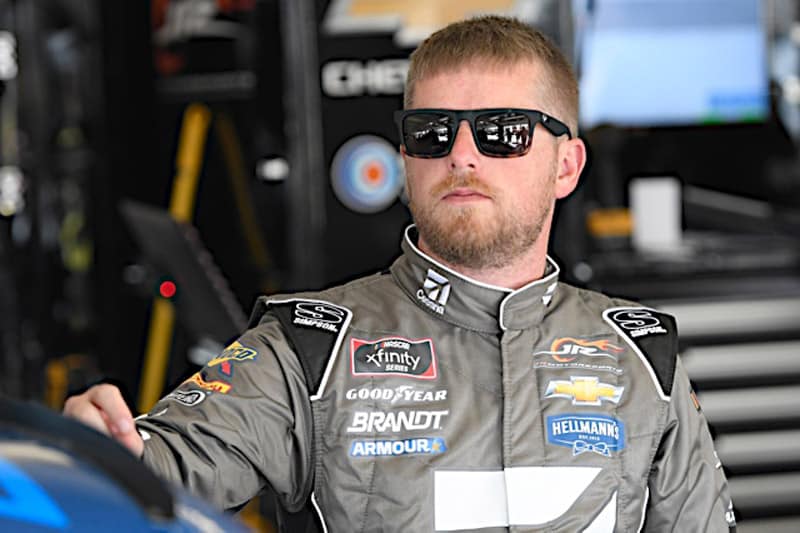 Justin Allgaier is off to another quick start with JR Motorsports this season.

Coming off a 2018 season that ended prematurely and without a championship trophy, Allgaier is eager to get back in the playoffs and go the extra yard, contending for a title at Homestead-Miami Speedway.

Frontstretch spent some time with Allgaier to discuss his 2018 season, relationship with longtime crew chief Jason Burdett, racing at Martinsville and more.

Davey Segal, Frontstretch: You’re coming off a career season statistically, your fourth straight season with JR Motorsports. What are expectations for 2019?

Justin Allgaier: Last year, we didn’t know what to expect. We had a great season, won five races, we did all the things right that you can do, and to be honest when you look back on last year, it hurts. Because we didn’t make the Championship 4. We didn’t win a championship. Do I think today I can stand here and tell you that if we don’t win a championship it’s a failure? No I can’t say that. Because there’s too many talented racecar drivers and teams in this sport. What I will say is that do I think we have a good shot as a company in JR Motorsports to put two or three cars into that final four in Homestead? I think we can.

For us, it’s a matter of being in the right place at the right time and execution. I say execution a lot when it comes to this sport but it’s so important. How many baseball games come down to the ninth inning? How many basketball games come down to the final two seconds? How many football games come down to that last play? And for us in NASCAR, that’s our green white checkereds, that’s our last pit stop. The effort we put in at the end of the race when everybody’s tired, everybody’s down, that’s the difference maker for winning races and championships. And really the difference in being just another car on the race track making laps. That’s really what it’s all about.

Segal: And this is your third year working with your crew chief Jason Burdett. How is your guys’ relationship?

Allgaier: It’s been great. Jason and I get along really well. Jason’s really calm, doesn’t really get too excited and I’m the complete opposite. I’m high strung, I drink a lot of caffeine so that doesn’t help. But it makes me normal, if that makes sense. I probably have ADD and I was just never diagnosed is the real answer, but for me the relationship we have—his son races outlaw karts and quarter midgets, which is how I grew up racing. We have a lot of similarities and common interests outside of racing, which I think a lot of times you don’t have that. Especially when you have very engineering based crew chief and a driver that has no engineering background, which tends to happen a lot in this sport, you don’t have a lot to talk about outside of these four walls of being here in the hauler when you’re at the race track.

We also run well together, we’re about to feed off each other’s energy. I feel like when I say what I need, he’s a guy that’s really able to decipher what I’m saying. Because every guy’s got different lingo, we all say things differently. We still struggle and have days where we scratch our head and say ‘what happened?’ But that’s the other part of it.

I’ve been married to my wife Ashley for over 13 years now, and a huge part of it is communication. For us, we’ve gotten into a rhythm of if there’s an issue, we talk about it. The worst thing you can do is let it fester. With Jason and I, we have the same kind of relationship. If we do nothing about it, after a while it becomes this big blow up. That’s one of the things we work really hard on. Here are all the chips on the table, and we’re both okay with that.

Segal: The new scheduled got released and the Xfinity slate has a trip to Martinsville scheduled. Most drivers haven’t been there before, but you have…

Allgaier: I’ve run a truck there, I’ve run a Cup Series car there. probably one of my favorite race tracks we go to on the circuit. I grew up racing short tracks and it’s got a lot of that short track mentality to it. You feel like you’re at at Friday night short track. It doesn’t feel like you’re on the big NASCAR stage. That being said though, I do go there a lot and watch. Even when we’re not running. I love going up there and watching the Truck races.

The only downside of Martinsville is it’s rally easy to have a driver who has no respect for the competitors around you to change the outcome of how a day works. That’s my only reservation of any of this, because it is our last race before we go to Homestead. It might be the difference maker of whether or not we go race for a championship. With that being said, I’m super pumped its on the circuit. I think the changes are good.

Did I expect some of the changes? Who would ever have thought that. But I give NASCAR a lot of credit. In today’s age of social media and instant access to everything, being able to come to he race track and spend a weekend, it’s a challenge. Our fan base is so passionate. If they weren’t, they wouldn’t show up. People nowadays are working seven days a week trying to make ends meet. We as drivers understand that. When you’re spending your hard earned money, I want a good show, for it to be ran well and NASCAR has done that for a long time. It’s just hard to do that in today’s time to gauge when they’re at the track. I can follow everything from home. We need to do a better job to make sure the fans are taken care of, and this is what it’s all about.

Segal: I heard you have an interesting nickname of “Lil Gator.” How did that come about?

Allgaier: Nobody likes to be called “lil” anything right? But when my father was born, they told my grandfather “Mr. Alligator, you can come in and see your son now.” So my dad is always “Gator,” and back when he was working in the ARCA Series, my dad would always hold my hand through the garage area. And someone that worked there said “oh, this must be the little gator you always talk about racing.” it’s funny how one person says it and then everyone finds out about it. I’ve carried that proudly because I have a lot of respect for my dad.