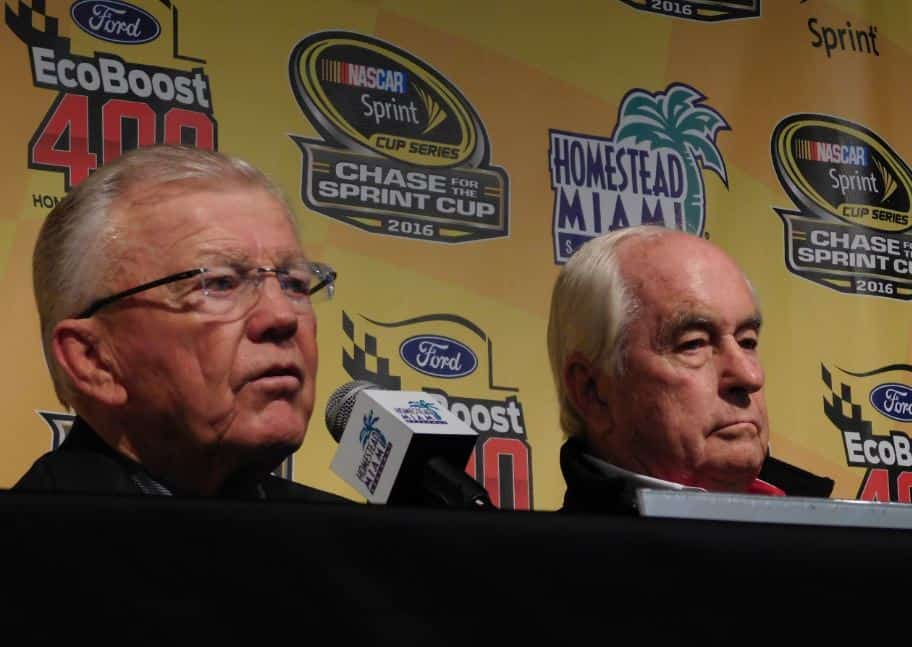 Forget NASCAR’s Big Three. This year, it’s the Big Two (owners, that is) leading the way in the Monster Energy NASCAR Cup Series.

Joe Gibbs Racing and Team Penske have flat out dominated the first nine races of the season. Ryan Blaney (Penske) and Erik Jones (JGR) are the only drivers in their seven-man roster left winless just one-quarter of the way through the season.

Kyle Busch leads the way, both on track and in the point standings. His three victories lead the Cup Series and he’s second with 599 laps led. But left unspoken is a consistency from him we haven’t seen before: nine-for-nine on top-10 finishes.

Reigning Cup champion Joey Logano leads the way for Penske, winning at Las Vegas and sitting second in points. But he’s being pushed harder by Brad Keselowski this year, who leads the series in laps led (609) while winning twice. The No. 2 team is doing it with an average start of 14.0, his worst since 2012 – ironically the year of his lone Cup title.

Denny Hamlin is enjoying a career resurgence for JGR and is the early leader for Comeback Driver of the Year (two wins, including the Daytona 500). Booting longtime friend Mike Wheeler for Chris Gabehart atop the pit box is looking like the boldest and best offseason move. And Martin Truex Jr., the series’ most recent winner, looks comfortable in his new surroundings at the No. 19 with crew chief Cole Pearn.

It all adds up to just their five drivers winning in the season’s first nine Cup races. And only Jones is in any serious risk of missing the postseason; the JGR-Penske juggernaut occupies five of the top six spots in points. Kevin Harvick from Stewart-Haas Racing is the lone outlier.

In the five years of NASCAR’s current postseason format, at least three organizations have entered the finale with a title shot. It’s still early, but that record is in serious jeopardy as this two-team group is threatening to sweep all four spots come November.

TWO: Pit Road Penalties All Around

From the drop of the green at Daytona, where eight pit road speeding penalties got assessed in the Great American Race, NASCAR officiating has flexed their muscle.

Kyle Larson lost a dominating day out front at Atlanta Motor Speedway through a speeding penalty. Kyle Busch got nailed the next weekend at Las Vegas in what cost him a weekend sweep.

Since then, Busch has gotten caught twice more, joining teammate Hamlin and four others atop the speeding leaderboard. In all, 43 pit road speeding penalties have been called, a 26 percent increase over the same nine races last year.

There’s some logical explanation for that. The difficulty in passing with this new package combined with parity has made every position gained in the pits that much more important. However, when officiating is in the news for calls that have influenced most races this year… that’s never good. Even if the drivers are succumbing to the pressure and at fault for pushing it.

On top of that, the biggest NASCAR gripe has been with a rash of uncontrolled tire penalties. While the rulebook clearly states a tire must stay within an arm’s reach of a crewman carrying a tire, it appears many calls have been made outside the spirit of the rule. Several of them have happened where safety isn’t an issue, other cars aren’t on pit road and the tire still remains safely in the pit box.

Will 200 have to wait another day?@KyleBusch loses 7 spots on pit road after the No. 18 team has trouble with the jack AND then gets hit with an uncontrolled tire penalty. pic.twitter.com/GSqL8phuMV

It’s a perplexing push NASCAR should consider backing off on. It feels like they’re tempted to insert unpredictability through these calls when both yellow flags and DNFs remain low. But remember how fans reacted to mystery debris cautions? Injecting yourself rather than letting a race naturally play out has its consequences.

The Bowtie Brigade appeared to have fixed their woes at the end of 2018 after a frustrating year. Chase Elliott won two of the final seven races, nearly cracking the title race while Larson contended in several others. Slow speeds were blamed on the new Camaro body style engineers were still figuring out.

But it turns out the dog ate their homework this offseason. Chevy’s incompetence to start the year has been stunning in the breadth of its slump. They’re 0-for-9 in Cup and own just one victory in Xfinity/Trucks – Michael Annett’s restrictor plate Daytona triumph. Only two drivers, Elliott and Kurt Busch, are inside the top 10 in Cup points. Just Elliott and Larson have led over 100 laps this season (Larson did all of his, 142, in that Atlanta race pre-speeding). Keep in mind this manufacturer runs more Cup cars per race weekend than anyone else. Quantity hasn’t exactly equaled quantity.

Hendrick Motorsports was supposed to lead Chevy’s comeback but has experienced mixed results thus far. Qualifying has gone well, at least, for Jimmie Johnson and William Byron. They’ve each won a pole along with Elliott, producing average starts that rank 13.2 or better.

However, race-winning speed remains elusive; HMS has just two top-five finishes. While Johnson and former crew chief Chad Knaus (now with Byron) do appear to each be making progress post-divorce, it’s clear playing catch-up will take longer than expected for both.

Larson has been the biggest mystery among a crowd of winless drivers. He’s gone MIA since his Atlanta stumble; two wrecks in the last three races leave him 18th in points. NASCAR’s most talented 20-something sits without a top-five finish and is clearly being outraced by new teammate Kurt Busch. (Keep in mind Busch is running in a car that didn’t even make the playoffs last year.)

If the struggles continue, expect Larson to pop up in Silly Season talks. He’s looking more and more like a Joey Logano, Part II, a driver that may need fresh scenery to realize his full NASCAR potential.

SHR’s winless status is a close runner-up in this category. It’s just the second time in six years Harvick has gone winless with the No. 4 team through the season’s first quarter. He’s been close, though, along with teammate Clint Bowyer who nearly took Richmond.

But Aric Almirola, who nearly shocked the sport by almost making last year’s Championship 4, has to be disappointed. He’s earned just one top-five finish, though did have a career-long streak of six consecutive races inside the top 10 (Atlanta-Texas).

As for a dark horse disappointment? Try Alex Bowman. He’s not the first driver you think of among the winless crowd; he’s yet to win a Cup race. But the driver who took over for Dale Earnhardt Jr. sits 21st in points without a top-10 finish. Those numbers aren’t what HMS expected, I’m sure, when granting him a 2018 contract extension.

NASCAR has been both bold and aggressive in year one of the post-Brian France era. Uncle Jim France is visible at the racetrack and letting new President Steve Phelps work magic in the boardroom.

The 2020 schedule is already out with experimental changes in anticipation of new tracks come 2021. These places have been put on notice: produce better attendance with reformed race dates or risk being left off altogether.

The sport also hasn’t hesitated to push the Gen-7 concept (whose parts will run in the All-Star Race) and push back on inspection issues. Their call to give Harvick a pass-through penalty for failing pre-race inspection at Bristol likely cost the No. 4 team a win. (It’s also the second time in six months they’ve come in direct conflict with Harvick and SHR. Their decision to issue a penalty post-Phoenix arguably cost them momentum and the 2018 title.)

Feedback has also never been more fluid from fans, the drivers (a group of whom met with NASCAR at Richmond) and the Race Team Alliance. It’s clear the sport wants to listen and reform itself for a core base it ignored during much of the 2000s. Fans, eager to see a new package, have rewarded them in some ways: ratings and viewership are up slightly on NASCAR television this year.

But 2019 has revealed the sluggishness that ensues when you hibernate on leadership for so long. Qualifying has been an absolute debacle, NASCAR remaining on its high horse and refusing a single-car setup when fans are literally booing the product on track. There have been three major changes in nine races, each not producing the desired outcome of just setting the starting lineup without Real Housewives drama.

The new package has also suffered under the weight of expectations. It could use tweaks after falling below the A++ level of competition that was hyped. But there’s resistance there, too, considering ownership costs and the Gen-7 car being less than two years away.

Overall, though there’s a feeling of optimism around NASCAR executives these days. Fresh faces like Elliott, Blaney and Christopher Bell are likely one-to-two years away from breakout moments. The FOX booth is getting a revamp in 2020 with Darrell Waltrip’s retirement, a move likely to enhance their connection to the millennials NASCAR covets. And the sport’s social media game, long an underrated part of their strategy, remains strong.

If only the racing could follow suit. Sure, Bristol was strong and Richmond had its moments. But improving the on-track competition itself remains the biggest level of concern entering the sport’s second quarter of 2019.