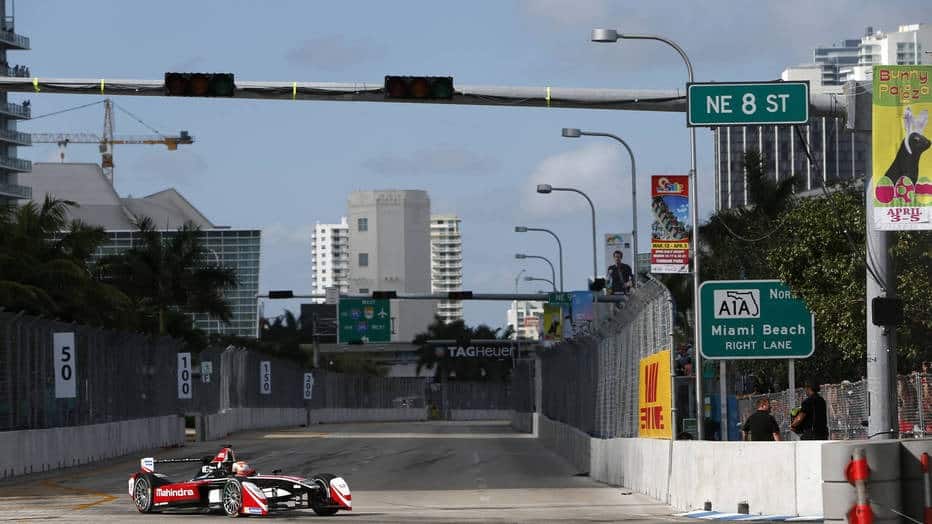 Formula E Races the Streets of Miami, but F1 will have to wait (credit: FIA Images)

It was announced earlier this month that discussions for the much-publicized street circuit in Miami have been delayed yet again after the local government in Miami failed to give the green light on the layout of the circuit for a potential race in 2020. The race was originally planned to take place this season, however, the layout was not approved and discussions were delayed until May of 2018. Just like last year, the next step of discussions for a 2020 race has been moved to May of 2019.

The original layout was supposed to run through the Bayfront area to then cross the bay into PortMiami. It is becoming less and less optimistic that an agreement between the FIA, Liberty Media and the local Miami government will be struck to hold a second F1 race in the United States.

This is not the first time that F1 has tried a street circuit in the US that failed. Back in 2011, there was a plan to set up a street circuit race through the city of New Jersey to then connect to western New York City. Similar to what is going on with the Miami GP, it had an original goal of a certain year (2013) and was then pushed back to 2014, then to 2015, and one more time to 2017 before the entire project was scrapped entirely. Some could say that the failed NYC GP discussion was the jettison to the talks about a street race in Miami, but it appears similar roadblocks are appearing when trying to set up an F1 Grand Prix in South Beach.

In my opinion, it was a bad idea to try a street circuit race in America in the first place. A street circuit becomes a major inconvenience to the people living in the city that the race is held. If the country that is holding the race has large F1 intrigue, it could definitely work in the series’ favor. However, the US is not a big market for F1. Sure, there are F1 fans in the states, but we American F1 fans are in the minority compared to the rest of the country.

The city, even though it holds Formula E races, would be effectively shut down for an entire week leading up to the race, making habitability a complete nightmare in a city that already faces heavy traffic. Now add four more hours of traffic trying to maneuver around the track, this will only create negative publicity for the sport and F1 will be an inconvenience for those who do not know or care about F1.

An American street circuit just does more harm than good for Liberty Media’s plan to raise F1’s popularity in the states. The best way to get on American’s good side is to not get in the way. Once you’re in the way of where I want to go, you will never get the love that you’re looking for from the people. Chase Carrey, when you read this, please explore options on race circuits that already field IndyCar races or something of that nature. Have Americans want to come to F1 instead of shoving F1 in the faces of those who may not care.

In a recent interview, SportPesa Racing Point’s driver Sergio Perez revealed that in 2012 he was offered a ride with Ferrari for the 2014 season. Perez, a Ferrari Development driver at the time, turned down the offer as he was more intrigued to drive for McLaren in 2013 following the departure of Lewis Hamilton to Mercedes. Perez was coming off of an impressive second season in Formula 1 where he was able to score three podiums, two of them being second-place finishes, for a lowly Sauber team while also leading 12 laps. Back in 2012, Perez had a lot of hype around his future, just like his future teammate Nico Hulkenberg. There were a lot of teams vying for his services in a top car.

“At that time Mercedes was interested, Ferrari was and McLaren so I was in a really strong position back then.” Perez said in his interview. “And I thought to myself ‘I need to get into a competitive car because I can win the title’.

“The opportunity with McLaren came and McLaren was winning races, was fighting for titles for the last five years, so how can you say no? It was quite an obvious thing.

“I had to say basically goodbye to the Ferrari academy and I went to McLaren. I think the mistake there was to sign a one-year deal. My management at the time didn’t do a solid job with the contract.”

Perez had a very tough season in 2013 with McLaren, the car was not strong, and he bumped heads (and front wings) with teammate Jenson Button on many occasions. He did not score any podiums, and actually ranked lower in the final driver standings than he did in 2012 with Sauber. Perez was ousted from McLaren and was never looked at as a top seat driver since, spending the next six seasons with the team formally known as Force India and now SportsPesa Racing Point.

Perez, though, takes his decision in stride. He has gone on to be a strong mid-field contender, notching five podiums through the hybrid era that has not seen very many podium finishers that did not drive for Mercedes, Ferrari, or Red Bull.

“That was a sad thing, I think that has damaged my reputation in Formula 1. But then I came to a fantastic team and I had good success with the team.”

It would be interesting to see what would have happened if Perez stayed with Sauber as Ferrari wished and jumped to the Scarlett red in 2014. Honestly, it might not have been too different. 2014 was Ferrari’s worst season in decades, only notching two podiums with a driver lineup that held three World Championships in Fernando Alonso and Kimi Raikkonen. Maybe Ferrari would have been more patient with Perez and kept him in the car to play second fiddle to Sebastian Vettel in 2015, getting more podiums and maybe a win or two when the car got better.

It is only speculation now as it does not seem as if Perez will get another opportunity with a works-team or race-winning team as his F1 career continues. Perez is only 29 so there are many more years of racing in Sergio’s future, especially if he continues to bring the money he brings for Mexico. As long as he has the backing, he will stay in F1.

Williams In Negotiation to Sell Team to Russian Racing Family

There have been reports around the F1 world that Williams are in discussions to sell the storied team to Dmitry Mazepin, multi-millionaire father of F2 driver Nikita Mazepin driving for ART.

It is no secret that Williams has had a tough past few years. A noncompetitive 2018 has only become worse as the 2019 car appears to be more than a second off from the rest of the pack. The team has been seen selling parts and is already set to have the lowest spending cap on the grid. They do not expect to see car upgrades until Silverstone, and at this rate, they will walk away with last place prize money from F1. The team is becoming less and less financially viable as time goes on. If the team cannot find a way to find funding while keeping the Williams name on the team, then they will have to go into administration and put the team up for sale.

The Mazepin family was in the mix to acquire the Force India team before it was purchased by a team led by Lawrence Stroll. Now they have set their sites on Williams. It would be a shame to see such a historic race team fall off the grid after 42 years in F1, but there is just no money for the team to get better. Unless the Mazepin family decides to give a large sum of money to the team and keep the Williams name, who knows if Williams will be on the grid in 2020. As the summer break approaches, a time when plans for the next season are usually made, we will get more details on Williams’ future. Unfortunately, it does not look good for the former championship winning team.

Drew is exactly right about F1 street racing in the USA. Miami would be absolutely terrible for the residents and I wouldn’t trust the people doing the city planning. Formula One is a world class organization. Only the best will suffice, exception is tradition (Monaco.)
Sergio Perez’s story shows one bad move can ruin your potential. The best move ever made was Lewis Hamilton to Mercedes from McLaren, but it looked bad when announced. How did he know?
Sad about Williams F1. Everything goes in cycles.