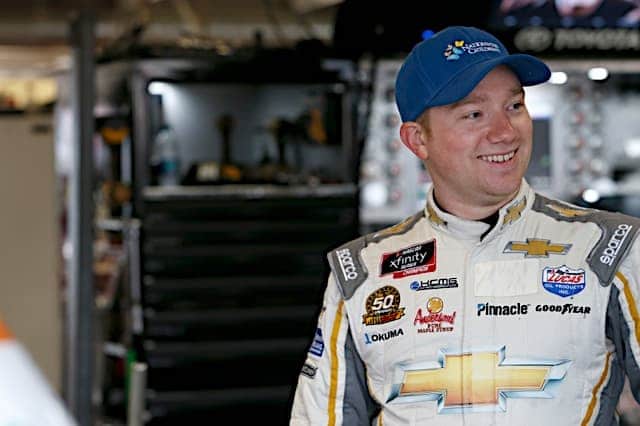 This week, NASCAR springs back into action after a restful off week. With the Monster Energy NASCAR Cup Series stars absent from the track, our panel of Frontstretch power rankings experts did the same.

Putting power rankings aside this week, many drivers are trying to take the bold step to the next level, and maybe one day, make their way into our rankings. Yet, there are select drivers who are seemingly in better positions than others who could become NASCAR next great talent. With that, here are 12 NASCAR prospects in alphabetical order who are in good positions to become tomorrow’s NASCAR stars.

At age 24, Christopher Bell‘s rise to stardom has been rapid. Currently a threat week in and week out in the NASCAR Xfinity Series, he has already claimed 10 victories in just under 50 starts. While a Cup Series ride may be hard to come by for the Oklahoman, it’s only a matter of time before he is scooped up and placed on stock car racing’s grandest stage.

Feeling good about this #Dash4Cash stuff! Thank you @XfinityRacing for allowing us to race for it! Hope my @ruud #Supra is faster than @Xfinity internet tonight ? https://t.co/XKa0ZBIUya

“There may be tension as JGR doesn’t seem to have a place to put this incredible talent in Cup. He needs to land somewhere, but where?”

Hailing from a large and successful racing family, Harrison Burton has already been turning heads in his first full-time NASCAR Gander Outdoors Truck Series season and recently was tabbed for eight Xfinity events with powerhouse Joe Gibbs Racing. Burton has won in every series he has competed in and it’s only a matter of time before he gets a NASCAR national touring series checkered flag. While the young teenager might need the time to mature as a driver, Harrison could become the next Jeff Burton in the next several years.

What Ross Chastain has done over the last two seasons has been downright unbelievable. Sure he competes in the Cup ranks, but it’s for a sub-par team. Yet, he does the same thing in Xfinity and Trucks… or so we thought. While he has gotten very limited seat time in top quality equipment, Chastain would currently be leading the Truck Series points if he was eligible to receive them in that series and beats top teams every week in Xfinity. Sooner or later, he will have a top Cup ride and will be winning races along the way.

“Dang this guy races a lot. I’m sure he’d even race a Yugo if he got the chance. He’d probably win too.”

Sure, Cole Custer has had ties with Stewart-Haas Racing since he was a young boy. Although he has had a comfortable ride up the ranks with his connections, Custer has let his results do the talking. Like Burton, Custer has won in every rank he has competed in, and that could certainly be true if he makes the transition to Cup.

Everyone’s up here ready to watch @TylerReddick rip the fence at 8am? @JHNemechek @CBellRacing pic.twitter.com/PLAaNbNZ8q

“A Haas boy since he was five years old, like it or not, he has made a name and has the talent to back it up, maybe all the way to Cup.”

Why is a driver who has not competed in a single national touring series race on our list? Well, 17-year-old Hailie Deegan has been tearing up the competition in the NASCAR K&N Pro Series West, collecting two victories in just 16 starts and has recently signed a contract to run six ARCA Menards Series races this season. The daughter of off-road racing renegade Brian Deegan, the Californian has been widely praised for her poise, willingness to learn and a charismatic off-track personality. Look out NASCAR, she might be the next phenom.

Another one in the books ? pic.twitter.com/uFoAiUuX0s

“Winning and having fun is a way of life for this family. There is no better combination for NASCAR.”

Like Deegan, Christian Eckes has had little experience in NASCAR’s national touring series, making just a handful of Truck starts for Kyle Busch Motorsports. Yet, he has been a developmental driver since he was an early teenager for big-name NASCAR team JR Motorsports, and now most recently, KBM in conjunction with ARCA team Venturini Motorsports. Eckes has had great resources around him and could be a household name before too long if he uses said resources to his advantage.

Back for year 3! Always fun doing these with @jblaudio and @toyotaracing. Stay tuned for the “Guess The Song” video coming soon! #JBLxToyota pic.twitter.com/SwUvZLcXOC

“His singing might need improvement, but driving abilities speak for itself.”

Jeffrey Earnhardt has bounced around from team to team for the better half of this decade, including stints in the Cup Series, finding little to no success. Finally, the 29-year-old driver has found his footing with a top team, Joe Gibbs Racing’s Xfinity program and satellite team Xtreme Concepts Racing. With near-immediate success, Earnhardt has begun to prove that he could live up to his family name.

“Speaking of Yugo’s, only an Earnhardt can make one cool. The next chapter of the Earnhardt legacy should be upon us soon.”

So far, Justin Haley‘s Xfinity Series career has been disappointing, including a penalty that cost him a race win last season in just his second career start. But, Haley, who had an incredible three-win Truck Series campaign last season, has not incurred the pressure as some of his fellow young competitors have seen. If Haley, who will make his Cup debut this weekend, can take the time he needs to learn and feel out the better competition, the Indiana native could certainly be a top prospect to become a figure at the top level.

Excited to get this opportunity with @FOEGrandAerie & @Spire77! Can’t thank everyone enough. Truly blessed. https://t.co/JosmnvmiUF

“A very humble guy with a very heavy right foot.”

A young racer from Wisconsin, Derek Kraus has quietly been taking over the K&N West series along with teammate Deegan. Recently, Kraus has gotten a couple of opportunities in the Truck Series and subsequently turned some heads. With Kraus’s mature astuteness and reserved demeanor, emulating fellow Wisconsin native and 2003 Cup champion Matt Kenseth, the 17-year-old could be the next Kenseth years from now.

? “Leaving the shop, we’re just closer right out of the gate. We just know whats expected of us and we’re trying to perform to that level.”

“He’s laser focused. With that kind of discipline, he could be tomorrow’s star.”

Sam Mayer burst onto the scene rather abruptly this season in NASCAR’s lower ranks, already claiming a K&N East victory in just his second career start. Mayer is a member of the Driver’s Edge program, a brand new co-oped organization through GMS Racing and JR Motorsports that prepares young developmental drivers to move up the stock car ranks. With his involvement with JRM (which has helped make names such as Brad Keselowski, Chase Elliott, and William Byron among others) and GMS, Mayer is in good company if he can make the transition to the next step.

“Mardy Lindley is impressed. Why aren’t you?”

Last season, few expected Tyler Reddick to claim the Xfinity championship. However, this season, the tables have turned as he seems to be a legitimate threat to repeat and claim the championship crown once again. With one championship already in the bag and a contender for another one, Reddick has proven he deserves a shot in a full-time Cup ride.

We're back at the track this weekend, and @TylerReddick is back on @SiriusXMNASCAR! Tune in this morning at 8am ET to hear him preview @TalladegaSuperS' #Dash4Cash event with @TheMikeBagley and @PPistone! pic.twitter.com/lKxXQkec0s

“While Christopher Bell receives all the attention as the next potential Sunday star, this guy is sure lurking in the weeds, ready to pounce at any second.”

Many questioned Zane Smith‘s sudden jump to a part-time Xfinity Series ride from the ARCA ranks this season. However, he has silenced his critics for the time being with decent performances. Given time to mature, Smith could be a top candidate for a Cup ride in three or four years.