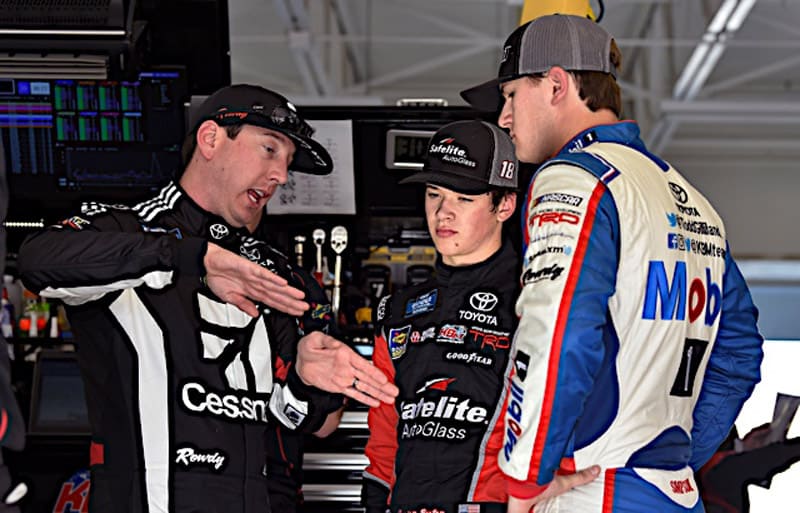 Perhaps the one driver whose job hinges on whether they win this season is Todd Gilliland.

“I don’t know how many times last year we were in meetings and I was just yelling at them about let’s go,” Kyle Busch Motorsports owner/driver Kyle Busch said earlier this season. “Our stuff is not that slow. You got to get up on top of the wheel and make it happen.

“He should have won two races last year, no question about it, but obviously it just didn’t happen. He’s got to show up this year and make it happen.”

Gilliland has just two top 10s in five races this season though. After crashing out of the season-opener at Daytona International Speedway, he’s finished every single lap of Gander Outdoors Truck Series competition. But driving for a team like KBM means that expectations are already high given that it’s proven race- and championship-winning equipment.

It’s not that the driver of the No. 4 Toyota has run poorly. In fact, it’s quite the opposite. But it appears Gilliland has the tendency to psyche himself out, if you will. Gilliland can have a strong run going, where he’s racing inside the top five or 10 with a real shot at Victory Lane, only to shoot himself in the foot by overdriving or making a small mistake.

Gilliland has definitely shown he’s capable of winning a race (see: Canadian Tire Motorsports Park last season). It’s just a matter of putting all of the pieces together and being in the right spot when the checkered flag flies.

Some drivers have natural talent while others have family-name recognition that helps get them a foot in the door. It seems Harrison Burton has both. Sure, coming from a racing family is helpful in getting started, but when it comes down to it, a driver has to prove their ability if they’re going to find actual, sustainable, long-term success.

Burton may just find Victory Lane before teammate Gilliland does at the rate he’s going. The numbers on paper don’t look good, as he has just two top-10 finishes in five races. But that also includes a DNF in the season-opener and an early exit at Texas Motor Speedway when he got loose and spun hard into the outside wall just 12 laps into the race.

The driver of the No. 18 Toyota scored six top 10s in eight starts running a part-time schedule for KBM last season, so he definitely has shown he has the talent to run well and race with the leaders. It’s another case of a rookie just needing more experience to translate into complete races.

Add in that Burton also scored a part-time gig with Joe Gibbs Racing in the NASCAR Xfinity Series this season, which means more seat time and likely more success on the track. In fact, in his debut a couple of weeks ago at Bristol Motor Speedway, he impressed as he started fifth and was inside the top 10 at both stage breaks before finishing 10th. But what the stat sheets don’t tell is that he was also forced to make an unscheduled late pit stop and still managed to race his way back to 10th before the checkered flag flew.

Last season, it looked like Stewart Friesen was just one good break away from finding his first career Truck Series victory. In fact, if it weren’t for some masterful blocking by Johnny Sauter last November at Texas, the driver of the No. 52 Chevrolet may have been celebrating then.

The alliance Halmar Friesen Racing developed with GMS Racing during the 2017 season was a huge benefit and definitely a turning point in Friesen’s Truck Series career.

The current point leader crashed in the season opener at Daytona but still managed a 10th-place finish and has just one result outside the top 10, which came at Atlanta Motor Speedway. In his last three races, Friesen’s ended up fourth, fifth and second.

Friesen clearly has the speed to lead and win races. It’s just a matter of translating those strong runs and putting the No. 52 out in front of the field when it counts the most. Don’t be surprised if he manages to find Victory Lane over the next couple of races, rather than at some point later this season.

It’s hard to really know whether Tyler Ankrum really has what it takes to find Victory Lane this season, especially since he just turned 18 not that long ago and has only four Truck Series starts to his credit. But with that said, the rookie is certainly headed in the right direction.

After a hard-fought 19th-place finish at Martinsville Speedway, Ankrum excelled in his first mile-and-a-half start and had a blast doing so. He started and finished sixth in the series’ most recent race at Texas nearly a month ago.

With just four Truck Series starts under his belt, there are bound to be learning curves for Ankrum, but he’s got equipment at DGR-Crosley that’s capable of running up front. Whether he scores the first career win this season hinges largely on how well he takes feedback from experienced team owner David Gilliland and translates that into his on-track performance.

What is there to say about Ross Chastain that hasn’t already been said? He, unfortunately, was a victim of circumstances when DC Solar was raided by the FBI, which forced his Xfinity Series ride to dissolve before he ever got a shot at running it full-time.

In the meantime, he’s run every race in all three NASCAR series this year, and while his results in the Monster Energy NASCAR Cup Series and Xfinity aren’t spectacular, neither is the equipment he’s run. That said, Chastain’s taken Niece Motorsports to five top-10 finishes in five races in the Truck Series, and it’s not exactly proven race-winning equipment either.

In fact, if he had declared for Truck Series points this year, Chastain would have a 17-point advantage over Stewart Friesen at the top of the championship standings. And while Niece Motorsports doesn’t field the best equipment on the track each week by a long shot, it’s hard to deny what Chastain has been able to do so far this season.

Someone, please find this driver a quality ride so he can really highlight the talent he clearly has.