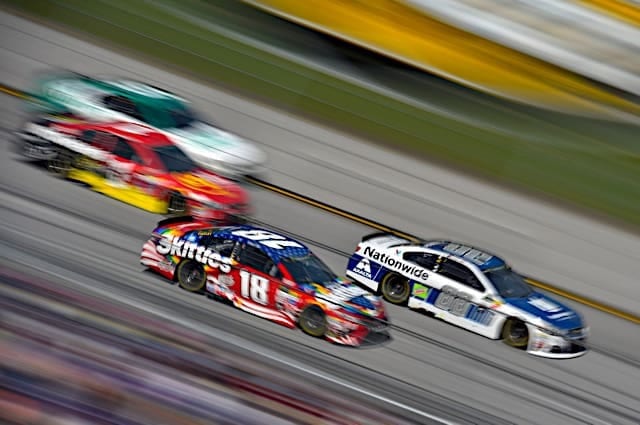 What will the Smith family offering to buy back shares in SMI mean to NASCAR?

This week, news broke that the Smith family, through their privately held Sonic Financial Corporation, have made an offer for the non-Smith held shares in Speedway Motorsports Incorporated.

The Smith family, through its privately held Sonic Financial Corporation, has offered to buy the non-Smith family shareholders of SMI at $18 a share. SMI has formed a committee to look at the deal. The most recent SEC filing say the Smiths own about 71% of the stock. @NASCARONFOX

This is coming off the heels of the news last year that the France family intended to do the same with International Speedway Corporation and merge that company with the France-owned NASCAR. With rumors abound of a potential monumental schedule shift in 2021, it’s going to become extremely interesting to see how SMI and the new NASCAR work with each other, assuming both sales end up closing.

Perhaps the most likely outcome we could end up seeing down the line, or at least what would be good for racing fans, would be a complete merger between NASCAR, ISC, and SMI. Such a partnership would be in control of 31 of 36 current dates on the NASCAR calendar, with Indianapolis Motor Speedway and Pocono Raceway being independently owned and Dover International Speedway being owned by Dover Motorsports Incorporated.’

Probably the biggest piece of advice I, or any lawyers, could give to NASCAR right now is not to cut races from those three outlier tracks. Doing so would almost certainly cause a lawsuit to be opened against the sanctioning body for monopolistic practices. Before, one could say the same thing about SMI’s 12 dates, but who knows if that could now be attainable without either ISC or SMI shareholders effectively getting in the way.

A merger, however, could potentially be great for race fans. With that level of control over the Cup schedule, NASCAR would be able to do all sorts of radical changes. Imagine a 32 race schedule with the 24 current Cup layouts, second dates at Daytona, Dover, Pocono, and the short tracks, and then adding Iowa Speedway and Road America into the mix? The chances of such a wildly unique shift would dramatically go up if merger ends up being the next course of this privatization dinner.

This weekend’s Cup Series race at Talladega Superspeedway will be the first time non-restrictor-plate engines will be used at the massive Alabama oval in 32 years.

Plates had been in use at Talladega and sister track Daytona since 1987. In the spring Talladega race, Bill Elliott set the fastest qualifying speed in the history of NASCAR at 212.809 MPH. 21 laps into the race, Bobby Allison had an extremely frightening crash in which his Buick almost ended up going into the crowd of spectators. One or two uncontrolled variables prevented what would have been the worst tragedy in the history of auto racing, or at least since the 1955 Le Mans disaster.

Plate racing has always been controversial. Dale Earnhardt Sr., unarguably the greatest driver to ever race with one on his engine, hated them. NASCAR has had to change rules involving the plates seemingly every time the circuit has visited Daytona and Talladega. Ultimately, however, plates have done their job; although there have been drivers who have died at these two racetracks in the thirty years since, it’s nothing compared to the almost yearly deaths that Speedweeks used to bring to the table.

NASCAR has instead decided to use tapered spacers on the engines, the same being used at most intermediate racetracks this year in order to reduce horsepower generated. As far as what changes this will bring to the overall racing, who knows. Sunday could be a boring, 187-lap freight train before a frantic dash on the last lap. It could look like Daytona was this year, a relatively clean but exciting race that ended with a bunch of cautions. Or it could look more like the pack racing seen at the turn of the millennium. Regardless of what happens, expect no tandems and the strange Chevrolet-Toyota partnership to continue following Daytona.

Who has been fast and who hasn’t in Cup?

Looking at the first quarter of the Cup Series season, one thing is for certain: Kyle Busch is going to be the man to beat in 2019.

Busch, with top tens in every race so far, is on pace to win 12 Cup races and 24 top five finishes. Obviously, it’s doubtful those will end up being his final numbers, but it still speaks volumes over just how head-and-shoulders above of how he’s been to the rest of the field.

Denny Hamlin has made a huge leap from last year. After not winning a race and finishing 11th in points in 2018, Hamlin has rebounded with two wins to start 2019 off. His only finish outside of the top ten has been an 11th at Atlanta.

Joey Logano, meanwhile, finds himself second in points in between points leader Busch and Hamlin in third. The defending champion hasn’t had the raw results yet outside of a win at Las Vegas, but his four stage wins are second only to Busch’s five.

There are a number of drivers who have not had the start to the year they’ve been looking for. Alex Bowman has begun his sophomore season at Hendrick Motorsports being last of the Hendrick drivers in points in 21st. Matt DiBenedetto hasn’t really backed up his strong run at Daytona with any significant races since outside of a decent run at Bristol. Bubba Wallace and Richard Petty Motorsports have continued to struggle. One driver in particular has had a particularly awful start to the season, though.

Where to even begin with this?

About mid-year last year, I had a theory about Kyle Larson. A simple one at that: Larson was aruably the best driver in NASCAR, but was held back by his manufacturer and his team.

At the time, it made sense; the Camaro was (and has) largely been a complete failure in Cup, one that has handicapped Chevrolet teams since the start of last year. Chip Ganassi Racing has been very hot-and-cold, mostly cold, and has had reliability problems in the past.

Busch has had a much stronger season than his seventh position in points indicates. He’s been by far the best Chevrolet driver, and has been challenging for wins just about every other week.

Meanwhile, Larson has spent 2019 struggling. He did dominate Atlanta, but ended up finishing that race in 12th. His hasn’t finished in the top 10 since Phoenix in mid-March. His 18th in points wouldn’t even be good enough for a playoff berth if they started tomorrow.

Some of the language Larson has used has used in the past six months has also been a bit concerning. Larson has spoken bad about the new rules package, told Frontstretch last year at Dover that he struggled with the car so much that sometimes he wished “I hit the wall head-on”, and told his team “Yeah, just having a blast this year. Lot of fun,” after wrecking out at Richmond two weeks ago.

Larson has the talent to still be the best driver in the Cup garage. But he’s going to need to stop giving up so much, on both his team and his car, if he wants to one day live to up that potential.

The cars still essentially have a governor that limits speed to X mph and all the cars can achieve X mph & maintain that speed lap after lap. Why does it matter if you use a restrictor plate or a tapered spacer to achieve the same result? Won’t the drivers still hold the gas pedal on the floor all the way around the track? The cars will still be stable through the turns at speed so the drivers will not have to lift. No one should be faster than anyone else. Won’t the result be the same?

This is not a rhetorical question.

I may be wrong, but this is pretty much what I’m expecting as well.

Yeah. What’s the difference if it’s a plate or tapered spacer? They both should produce the same result.

If a restrictor plate engine makes about 430 hp, they increased hp by 23% but still kept the cars below 200 mph? I don’t think increased down force necessarily increases drag – does it? Something doesn’t seem right.