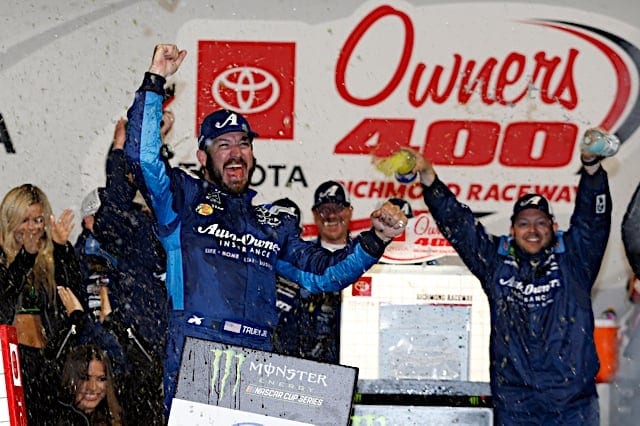 After a week-long break, the Monster Energy NASCAR Cup Series is set to return to the track at Talladega Superspeedway this weekend.

For the first nine weeks of the season, Cup teams sprinted from Daytona International Speedway to Richmond Raceway, laying down the framework for their 2019 seasons with early-season triumphs and setbacks. Some drivers are already locked into the playoffs, while others are still trying to get their seasons in gear.

The contenders on a driver level are fairly clear already; organizations, not so much. There’s been talk here and there about the struggles of Hendrick Motorsports or the strength of Team Penske, but in a sport where so much focus can often be spent on the individual racers and their immediate crew, sometimes the bigger picture — how’s this organization as a whole doing? — can be tossed to the side.

In all, 22 different organizations have attempted a Cup race in 2019, 21 of which have qualified for at least one event (a 23rd, XCI Racing, makes its debut this weekend at Talladega with Jeffrey Earnhardt). Most are present at each track, while others have relegated themselves to part-time schedules.

Here’s a rundown of those 22 organizations, ranked by average finish across all of its teams (in the case of multi-car operations), in 2019 thus far.

Little to say here; in its only attempt of the season, the No. 71 team failed to qualify with Ryan Truex at Daytona. It’s unknown if the Tommy Baldwin-owned organization will return this year; more recently, Baldwin’s been working with Premium Motorsports.

In five starts in 2019, Carl Long and Co.’s MBM Motorsports is still struggling to find its footing. That said, Joey Gase‘s 33rd-place result at Richmond was the No. 66’s best result of the season thus far.

At this point, RWR is at the bottom of the barrel with regards to full-time organizations, with the Nos. 51 and 52 a few steps behind much of the rest of the field, especially those with charters. Call it growing pains, perhaps; 2019 marks Ware’s first with the No. 52 competing in each event after showing up intermittently in 2018, and even last year, the No. 51’s number and points were occasionally farmed out to other organizations (see: Stewart-Haas Racing).

The team that took over Furniture Row Racing’s charter hasn’t been especially impressive in its first foray into Cup racing, but bear in mind that some of its more common drivers — Quin Houff and Garrett Smithley — are still relative newcomers to the series and its cars. That said, on the whole the organization seems a step or two behind Premium, which has been assisting the team in getting its cars to the track in 2019.

The positive for StarCom Racing is that it’s far from the worst team with a charter in Cup right now, which is probably a bit of a byproduct of having a single driver, Landon Cassill, vs. Spire and Ware, who have employed multiple competitors in 2019. Never downplay familiarity, especially when there’s a veteran involved.

Premium’s average would actually be a bit higher if it weren’t for its occasional part-time teammate to Ross Chastain and the No. 15, the No. 27. Chastain tends to outperform the equipment he’s in, and 2019 has been no exception. A 10th-place result at the season-opening Daytona 500 has helped matters.

Losing Matt DiBenedetto to Leavine Family Racing put Go FAS in a precarious situation, and despite the media attention the No. 32 thanks to new driver Corey LaJoie (and his face), 2019 has been quite the struggle for the organization, with just one top-25 finish thus far.

Here’s the problem with FRM: there are occasions when the Bob Jenkins-led organization earns high marks (or, at least, high marks for a lower-budget team), like when Michael McDowell, David Ragan or even rookie Matt Tifft finish in the top 20. But a NASCAR team is the sum of all its parts, and oftentimes when one of the FRM cars finishes well, the others are outside the top 30.

Without Parker Kligerman’s 15th-place run in the Daytona 500, the No. 96’s average finish would be a 29.3, dropping GBR a few spots in this ranking. So don’t put too much stock in this part-time team being ahead of a few of the full-timers; there’s less of a sample size. That said? Even as a part-timer, Kligerman’s generally better than, say, Spire or Ware.

This is a rough one. Bubba Wallace has made his frustrations known in his second year with the famed No. 43, which hasn’t finished higher than 17th in 2019 and has just two top 20s. While few would consider the Petty name still synonymous with winning or even being a threat to win at this point, it’s still strange to see the organization below someone like LFR or Germain Racing.

Brendan Gaughan and the No. 62 have just one start in 2019, a statistic that will change this weekend at Talladega. Then again, who knows, maybe he’ll finish in the top 10 and shoot his team even higher up in the rankings. Daytona- and Talladega-only teams are weird, man.

Again, a team is a sum of all its parts, and while one JTG car might have a strong run, the other might have a miserable day. Take the first two events of the season: Ryan Preece finished eighth at Daytona while Chris Buescher finished 37th, and then Buescher came home ninth at Atlanta Motor Speedway while Preece finished 35th. At times, JTG is firing on all cylinders, but other times, only one of its cars is (or perhaps neither).

For the majority of 2019, Germain has had just one car to worry about (and when it had two, the No. 27 at Daytona, it was run in conjunction with Premium): the No. 13 with Ty Dillon. And Dillon has certainly helped the team continue its rise up the organization rankings in NASCAR, thanks to three top 15s and no finish outside the top 30 thus far. The No. 13 even snagged a stage win at Bristol.

Much of RCR’s subpar average finish entering Talladega can be attributed to its rookie driver, Daniel Hemric, who sits 28th in points with an 18th at ISM Raceway his top result of the season. Then again, Austin Dillon hasn’t been perfect either, scoring just two top 10s in nine races. But Hemric’s slow start to the year definitely hurts RCR’s rank.

Aside from lackluster team results at Martinsville Speedway and Bristol, RFR hasn’t been awful, with Ryan Newman and Ricky Stenhouse Jr. generally scoring top-20 finishes each week. One major problem, though: in 18 chances at a top 10 this year, Newman and Stenhouse have sealed the deal just three times.

Shoutout to Paul Menard, who’s shown that Ryan Blaney’s strong results in the Wood Brothers’ No. 21 before his departure to Penske wasn’t a fluke. Thank the Penske connection, of course, but it’s cool to see the No. 21 become not just the top satellite team on the circuit, but also one of the more consistent organizations as a whole.

Look above — there are a lot of teams behind Hendrick in average finish this year. So perhaps the calls of the sky falling around Rick Hendrick and Co. aren’t totally substantial. At the same time, this is an organization that, years ago, would have been competing for the No. 1 spot on this list. Hendrick’s best team result in 2019 has been at Texas Motor Speedway, where none of its drivers finished worse than 18th, led by Jimmie Johnson in fifth.

It’s still a bit early, but the change from Jamie McMurray to Kurt Busch in the No. 1 looks to have been a great decision so far for CGR, which is now easily one of the top five organizations in the NASCAR world. Thing is, it’s Kyle Larson who’s been the weaker link there in 2019, limping into the Easter break with a 19th-place result in points.

Take away a dismal Daytona 500 — Clint Bowyer was the team’s best driver in 20th, and two drivers were outside the top 30 — that resulted in an average team finish of 27.8, and SHR might be one spot higher. The four-car organization isn’t quite on the level of Joe Gibbs Racing or Penske this year, all told, but that could very easily change at Talladega and beyond, especially if Aric Almirola can recapture the magic of his 2018 superspeedway results.

Like SHR, Penske’s average finish is marred by a single outlier. In its case, there’s Texas, where Joey Logano, Brad Keselowski and Blaney finished 19th, 36th and 37th, respectively. On the flip side, the three-car team has the best single-race average finish for anyone in 2019: 3.3, at Auto Club Speedway, after all three drivers finished in the top five.

It’s no small feat for a single driver to have an average finish in the single digits, let alone an entire organization. And JGR, let’s not forget, is four teams strong and has a newcomer to the team (Martin Truex Jr.) and a young gun (Erik Jones) alongside its veterans. Joe Gibbs’ longtime entry into the Cup Series has been stout in 2019, and barring a major breakdown now that the series is back from its break, that’s not going to change anytime soon. See also: the Xfinity Series, where the organization has been just as unstoppable.