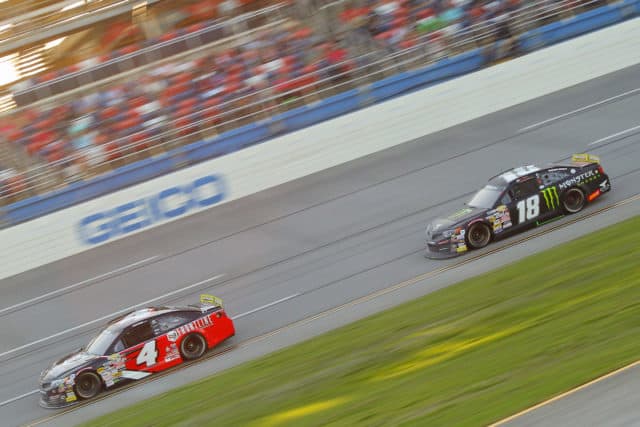 Gander Outdoor Truck Series regular Todd Gilliland came to Talladega in search of a confidence boost after a lackluster start to the 2019 campaign. He found just that, cycling to the lead on lap 43 after a caution flew for a turn four wreck between Thad Moffitt and Christian Eckes, and never again relinquishing the lead. In the process, he scored his second career ARCA Racing Series win and his first since Toledo in 2015:

Gilliland proved impossible to pass over the final 37 laps of Friday’s race, with the contending Toyotas of Riley Herbst and Brandon Lynn failing to mount any sort of challenge in the closing laps. The final 10+ circuits all featured single-file racing at the front of the pack. The field was further weakened with the loss of numerous strong cars. Eckes wrecked out in the lap 43 caution, while early race leader Sean Corr never recovered from lost track position on a slow pit stop. Brandon McReynolds lost multiple laps under green with a hiccup in his motor.

For Self, rebounding to score a top-five finish on a superspeedway after a disastrous start to the 2019 campaign in Daytona allowed his No. 25 team to capitalize on the continued struggles of their teammate No. 15 car, sustaining momentum from ARCA’s early short track stint at Pensacola and Salem. Self’s performance was deserving. The driver deftly saved his car despite heavy bumping from Joe Graf Jr. early in the race that nearly spun him out in turn four. The only full-timer in the lead pack also happened to be the only driver in said lead pack to actually attempt to make a move to win the race. The new points leader heading to Nashville, Self has cemented himself as the heavy favorite to win the ARCA crown in 2019.

Self’s other Venturini teammate this weekend, polesitter Lynn, followed up his career-first ARCA Racing Series pole with a composed, steady third-place finish that was also a career best. The performance was even more impressive given that Lynn had not raced an ARCA car since Charlotte last May.

Ty Majeski‘s return to Chad Bryant Racing (formerly Cunningham Motorsports) proved immediately fruitful, with the No. 22 carrying the flag for the CBR organization to a fourth-place finish, the best of the season for the No. 22 team.

Lastly, Herbst scored a runner-up finish that continued the Joe Gibbs Racing No. 18 team’s momentum from Ty Gibbs‘ strong start to 2019, tag-teaming with race-winner Gilliland on the race’s final restart on lap 56 and pushing the No. 4 to the win for the remainder of the race’s laps. For Herbst, who has had an ugly few weeks with an early wreck in K&N East competition at Bristol (and the nasty episode with pit “reporter” Hannah Newhouse afterwards), this Friday made him look like a rare veteran in the ARCA field. Given the number of starts he’s made in the series and the strength of the cars he drives, that was overdue.

The wreckage pretty much says it all: Eckes‘ return to ARCA competition after being hospitalized over the Salem race weekend did not end well.

What remains of the Eckes car. pic.twitter.com/EGv3g4s2LX

With green flag pit stops commencing on lap 43, Moffitt made a late move to pit road and got visibly out of shape. Eckes, either pinned in a bad stop or being overly aggressive, depending on which radio channel was listened to, ended up making contact with the No. 46, and the damage was done. As a result, Eckes finished dead last in the field, and will lose more than 100 more points to teammate Self and current points leader Braden as the series heads to Nashville. Eckes will contend for wins all season long, but the championship hunt may well be over.

Speaking of Moffitt, his day was sour well before the green flag flew. In the third of five groups in qualifying, miscommunication between Moffitt’s No. 46 team and the No. 09 team of C.J. McLaughlin resulted in those two cars racing side-by-side with each other coming to the green flag. With the group completely disorganized, Moffitt’s team was left visibly fuming on pit road, while all the cars in that third group failed to crack the top 10 in qualifying. Moffitt was a non-factor in the laps run up to the lap 43 yellow flag that resulted in his car behind the wall.

ARCA’s return to Alabama did not treat its native sons particularly well, and not just because Ed Pompa ran a Clemson Tigers paint scheme in Crimson Tide country. Thomas Praytor, making his first start of the 2019 season, actually ran an uneventful race but ended up in smoke in the closing laps with an apparent tire issue (he would finish 20th). More disappointing was a woeful 14th-place finish from Bret Holmes, who started in the top five on the final restart on lap 56 but dropped like a rock when the high line faded after Gilliland and Herbst executed a perfect restart. Too far in the pack to recover, Holmes has now finished outside the top 10 in three consecutive ARCA races at his home track.

Arguably the worst day of the weekend went to Graf, which is odd when describing a top-10 finisher. But Graf’s performance, especially on the heels of last year’s race that saw him come within an inch of victory, was nothing short of disappointing. Early in the race, Graf’s aggressive bump drafting nearly took out Self’s No. 25 car:

Joe Graf Jr. isn’t afraid to use his bumper. Exhibit A: #ARCA pic.twitter.com/3HQ9ckupzS

Graf continued to make waves early in the event, so much so that by lap 37, Graf was literally shuffled out of the lead draft by McReynolds and others. Listening to the team’s channel two radio, Graf’s spotter told the pit box that McReynolds’ spotter literally told him that they had worked together to get Graf out of the lead draft because they were uncomfortable racing near him.

And while Graf was not involved in either of the two incidents to bring out the yellow flag in Friday’s race, he did incur his team’s ire after a lap 50 restart that saw him shuffled to the middle, after he hesitated on his spotter’s call of the green flag. It was about as unpopular as a driver can be at Talladega without wrecking another competitor.

Andy Hillenburg’s Fast Track Racing team had an afternoon to forget at Talladega. D.L. Wilson finished with his car in one piece in 21st, but not before suffering from fuel pressure issues under the lap 43 yellow flag and nearly causing an early-race wreck on the frontstretch that had Twitter at its worst:

That was topped, however, by Tommy Vigh Jr. enduring about as hard a wreck as has been seen in recent memory in ARCA competition:

Tommy Vigh Jr. with one of the hardest hits you’ll see this season #ARCA pic.twitter.com/2HeuilHyFY

Vigh fortunately walked away from the wreck under his own power and was released from the infield care center as the checkered flag flew.

More good news, bad news. Despite being only a two-car accident, it took seven laps around a 2.66 mile race track to get the surface cleaned up and the field in line. The good news was that, unlike NASCAR at Bristol last month, ARCA got the lineup right before throwing the green flag. The bad news? The lengthy caution had competitors and viewers alike frustrated. Given that seven laps of a 76 lap race is nearly 10% of the event, it’s not hard to understand said frustration.

Last bit of good news, bad news. The good news is that ARCA put on a superspeedway race without a big one. The bad news? The lack of carnage was the only silver lining on what was a miserable finale to Friday’s race. In the 37 laps that Gilliland led the race en route to victory, not one single car attempted to pass his No. 4. The lead pack ran single-file for more than 10 laps to finish the race, with the only move any driver made to make something happen coming from fifth place Self on the last lap. The sentiments below are perhaps harsher than I would use, given that one must remember that most ARCA racers lack experience with drafting and can’t be expected to make Friday’s races Cup lite. But ARCA racers can and should be expected to at least try to win the race, instead of, as both Herbst and Lynn stated in post-race remarks, playing the “owner’s championship” points-racing card.

Friday was not ARCA racing’s finest hour. It’s fortunate that the historic short track in Nashville is on next week’s docket to wash the taste out of fans mouths.