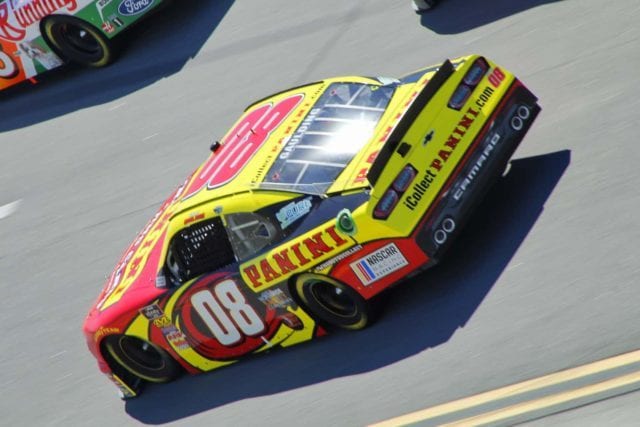 This season has been all about improvement for Gray Gaulding and that was on full display in Saturday’s Xfinity Series race.

With the race closing, Gaulding began shuffling his way up through the field, finding any openings and taking them. The No. 08 got a push late that would propel him to second. From that point, everything was falling into place for him to earn the runner-up spot and be in position for his first career victory should the No. 2 have an issue.

He didn’t have an issue but Gaulding still marked a huge check mark in his career: a top-five.

“Man that was awesome,” said Gaulding. “I tried every single trick in the handbook to get it done. The (No.) 98 got a huge run and went up to block me, then I slingshotted by him and I tell you it was pretty close. Maybe if the 98 wouldn’t have got up in front of me I would’ve gotten up next to the 2 car. I was at least trying to get to his bumper and move him out of the way or something. I can’t say enough about my team, my team gave me a great car. ECR Engines, this is the second time we’ve had them and to show out like we did and to have Panini on our car. This is Talladega man, this is freaking awesome and this is what every driver wants to have is that last lap chance to win a race and we did and came up a little bit short.”

A chat with @GrayGaulding who had to earn help all day. He didn't get pushers until late in the race and nearly won.

He said he wasn't going to dirty up Reddick to get the job done. pic.twitter.com/0YGWacSAeT

Talladega was the same track where Gaulding earned his first and only top-10 finish in the Monster Energy NASCAR Cup Series. Both career-best finishes by Gaulding — today’s race and the 2017 Alabama 500 — came in different ways.

The 2017 fall Talladega race was a battle of attrition and survival while today’s race was a combination of that survival but a big part was the speed and skill that was put on display. The races that SS-Green Light Racing has tallied this season with both Gaulding and Ray Black Jr. have shown that the organization as a whole is improving week by week.

During the span of this season, SS-Green Light has become a permanent spot inside the top 15 running with each other. Though some of the finishes haven’t been there, they have shown during the race that they can compete with some of the medium-budgeted teams and even occasional big teams.

“We’re the underdogs everywhere we go,” added Gaulding. “I like it like that. I liked at the beginning of the year people didn’t really pay attention to us but now it just seems every week with the cars we’re building, the way I’m driving, and the way my crew chief Patrick and the guys have set my cars up, we’ll have a chance at it one of these days. I’m looking forward to Daytona but we’ve got road courses coming up. I can’t say enough about Bobby Dotter and his guys’ man, that was a great car and I drove the heck out of it, I gave it all I had.”

Saturday’s finish was a big deal for SS-Green Light Racing owner Bobby Dotter. It was his first top-five finish since Andy Lally brought it home fifth in 2017 at Mid-Ohio. Overall, fifth was the teams best career finish up until today. Dotter earned two fifth-place finishes in his career as an owner-driver (Myrtle Beach and Hickory in 1995). The finish also snaps the slump SS-Green Light Racing has had at Talladega of two straight 40th place finishes.