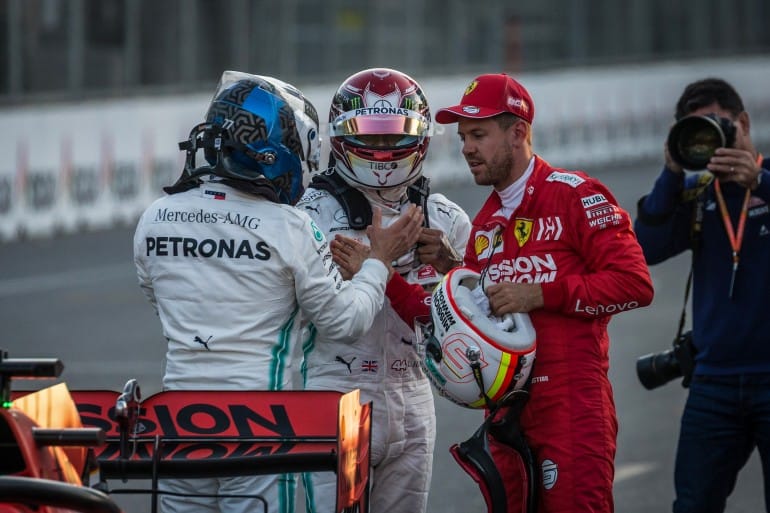 The third Azerbaijan Grand Prix (fourth race at the track) has gotten off to an interesting start — with a drain cover coming loose and destroying George Russell’s car, some crashes and close calls in practice as well as two crashes in qualifying, but it’s Valtteri Bottas who persevered through the chaos to secure his second pole of the season and eighth of his career to top off a wild Saturday in Baku

Bottas set a new track record with a lap of 1.40.495, slightly edging out his teammate Lewis Hamilton, who will start second. The Mercedes AMG Petronas team yet again have Ferrari covered despite Hamilton thinking that the gap is closer than it seems.

“Ferrari have looked incredibly quick,” says Hamilton. “This is a massively great result for us. We came here, we didn’t have an upgrade so for us to lock out the front row, it puts us in a great position for tomorrow. Pace-wise we are closer in race trim….”

Sebastian Vettel and Ferrari just can’t seem to be able to utilize that quickness as he qualified third. Max Verstappen could only muster fourth after using an interesting qualifying strategy with two laps on the same tires.

Sergio Perez set the fifth quickest time on a Baku circuit that has given him moderate success in its short history. Daniil Kvyat was sixth ahead of hot-shot rookie Lando Norris in seventh. Antonio Giovanazzi out-qualified his champion teammate Kimi Raikkonen for the first time this season as the Alfa Romeo duo qualified eighth and ninth. Giovanazzi does have a 10-place grid penalty, though, for power unit changes.

Charles Leclerc posted the fastest laps in all three practices this weekend and was poised to challenge the Silver Arrows for the front row. But a lockup in turn eight in Q2 had the young Ferrari driver slamming the barrier in the tight corner, ending the Monaco native’s chance at his second career pole.

We’ll see if the crash will force a grid penalty or pit lane start with Pierre Gasly but it is still not an ideal place to be on a tight Baku city circuit. Leclerc has a rough road ahead to be able to fight for a podium next week and you could feel the emotion as he called himself stupid over and over again on the radio, and later taking to social media to express his frustration.

No excuses. I've been useless. I will push to have a better tomorrow.
Sorry to all the people supporting us and even more to the whole team that deserved so much better.
?: @motorsportpics1 pic.twitter.com/F8rDEr2L0A

Q2 was a session full of delays, after Leclerc’s crash with seven minutes remaining, as well as track clean up following Robert Kubica’s accident, which delayed the start of Q2. Carlos Sainz Jr. was the first man out of Q3 and will roll off in 11th. Daniel Riccardo was 12th ahead of Alex Albon in 13th and Kevin Magnussen in 14th.

Gasly did not set a time in Q2 since he is already starting from the pits following the French drivers’ penalty for ignoring a weigh bridge summons in practice.

Lance Stroll had a shunt in practice and could not get the repaired car into Q2 yet again. He’ll start 16th. Romain Grosjean is 17th, with a surprising 18th starting position for Nico Hulkenberg.

Russell was able to beat out his teammate for 19th despite being the center of controversy on Friday when a drain cover destroyed the floor of his car.

Kubica didn’t come without his own set of problems, slamming the wall as time expired in Q1. He will start 20th.

Williams does not look to repeat points-paying finishes at Baku.

After all that has gone on this weekend in Azerbaijan, we still have a race tomorrow (April 28th, 2019) starting at 8:10 AM EST.