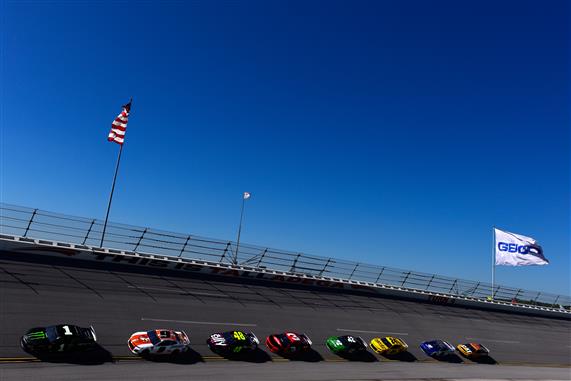 One is the loneliest number. 200 is the most arbitrary it seems, at least in NASCAR racing.

Much of the 2019 season was spent aggrandizing Kyle Busch’s 200th win. Making a career achievement out of aggregating minor-league race wins, though running three series a year wasn’t even possible until 1996, nearly 50 years after NASCAR got its start. Even more arbitrary was listening to analysis of how Richard Petty’s 200 Cup wins suddenly meant less because there were fewer cars racing for much of his era. Presentism has definitely come to NASCAR.

And now, with that sordid episode finally in the rearview mirror, the arbitrary 200 reared its ugly head again at Talladega. With NASCAR’s Cup Series taking to the legendary superspeedway without restrictor plates for the first time since 1987, giving the drivers horsepower and throttle response they’ve wanted on (the former) plate tracks for years, the results were what everyone expected; faster closer speeds, faster runs on lead cars and faster overall speeds. In all, 21 drivers broke 200 mph in the first practice session Friday.

Within hours, and before the Cup cars went back on the track for Happy Hour, NASCAR stepped in, changing the aero package and installing wickers on the rear spoilers of the Cup cars. The technical rationale for the change was to reduce engine RPMs and thus the closing speed of the cars in the pack, but the end result of that would be… to reduce the speeds, to get the cars under 200mph.

#NASCAR … View of the wicker added to the rear spoiler of @mattdracing’s @LFR95 car pic.twitter.com/3tXixpyJVM

Naturally, like most reactionary efforts, the wickers didn’t do what was intended. While they did reduce engine RPMs, speeds went up, with 23 cars breaking 200 mph and Ryan Newman and five others breaking 204 mph in the draft.

It’s as fast as Cup cars have run at Talladega since the Bill Elliott 212-mph era of decades prior. And it left writers, fans and teams alike leaving Talladega on Friday night wondering if NASCAR was going to make another last-minute change. Would they change the size of the tapered spacer? Would they make another adjustment to the already sky-high spoilers? Would they (gasp) bring back the restrictor plates?

Fortunately, as of Saturday evening, no such changes have been made, and the Cup cars that qualified for tomorrow’s GEICO 500 are running a package they’ve practiced at least once. Though even with that practice, Ty Dillon made it very clear that the Cup cars with the wickers installed were going to prove a real handful for Sunday’s field.

@tydillon says the new package has made all elements of pack racing happen "twice as fast", also states that the wickers have reduced visibility out of the cars that the clear-topped spoiler was supposed to provide @TalladegaSuperS #GEICO500

If the end goal was to create more opportunities for cars to pass on the superspeedways without being stalled out by high-line freight trains of cars, Friday’s practices do suggest the mission has been accomplished. But that end result comes almost as a sigh of relief rather than an accomplishment. After all, it’s not like Friday’s sessions were the result of exhaustive testing. Coming to Talladega, only three cars had run this superspeedway package, and that was at Daytona.

Such a willy-nilly attitude with regard to testing is unfathomable, especially given that the two tracks to be impacted by the results are Talladega and Daytona. NASCAR’s two largest tracks, both are crown jewels of the sport (let’s not forget both hosted Winston Million races back when the title sponsor actually wanted to be involved in the sport). Even in NASCAR’s decline, crowds have been (relatively) healthy. This package will dictate how good racing at Talladega is in 2019, but more importantly, this package is supposed to be the show at the 2020 Daytona 500.

That the package is being changed at all is a head-scratcher, given that this year’s Daytona 500 was still the best race of the season (the green-flag run that saw Matt DiBenedetto’s freight train run down and lap larger packs under green was some of the best Cup racing seen in the last decade).

But knowing that to be the case, the fact that races of such magnitude are being left to next-to-no testing is a literal danger to the future of stock car racing. Lackadaisical testing is exactly what led to the 2008 debacle of a Brickyard 400, a race so bad that stock car racing at the Indianapolis Motor Speedway, arguably the most hallowed oval track in the world, has never recovered from it.

Imagine what would happen if a Talladega or Daytona race turned out that bad? That Friday’s ARCA race turned into a single-file snoozer over its last 37 laps already had social media fired up for all the wrong reasons (and there wasn’t much of a crowd to gauge a reaction of):

But getting back to the arbitrary “200”, that this package is now the product not of testing, but of a knee-jerk reaction to a practice speeds chart, is equally concerning. Not only did the installation of wickers not bring the cars back under 200mph, in the 10 hours I spent in the car driving to Talladega listening to Sirius/XM NASCAR radio, in the two days I’ve spent on the scanner or in the media center listening to teams and analysts at work, not once have I heard any explanation of why 200 mph matters.

The speed mark is no threshold for cars not getting airborne. Nor is it really a metric for fan safety. Carl Edwards got into the Talladega catchfence in 2009 riding with a package that ran under 200 mph, as did Austin Dillon at Daytona in 2015. The speed is obviously not the threshold for the limits of the drivers’ safety equipment. If it was, the question would have to be asked how NASCAR has let drivers race at Michigan and Auto Club Speedway over the last decade, where corner entry speeds routinely eclipse 200 mph. And 204 mph, for that matter.

So, why 200 mph? Why is 200 mph such a big deal? No one from Virginia to Alabama seems to have an answer. Yet slavery to that very number is dictating the rules for one of the most anticipated races on the Cup schedule.

In today’s NASCAR, 200 really is the most arbitrary number that you’ll ever know.

200 mph is when the track ins starts raising rates so as usual its a cost factor. Why would anyone not know that. Its all about the money. It all started when bobby allison’s car got in the stands in the 80s the track liability cost rose. And imo the speed didnt have as much to do as the fact that bobby ran over a harmonic ballencer and that is why the car lifted. Granted it would havent got in the stands if the car was going slower.

My guess would be not because the cars won’t get airborne (they obviously still can), but the capabilities of the catch fencing in keeping said flying car out of the stands at speeds over 200. I’m sure they could bulk up the catch-fence, but doing so would likely hinder the view of the fans.

Was it Rusty Wallace who a decade or so back did a tire test at Talladega unrestricted, and was running laps averaging around 235 mph? After seeing some past wrecks in the 200 mph range and below, I doubt the current catch fences could keep a car out of the stands at 235.