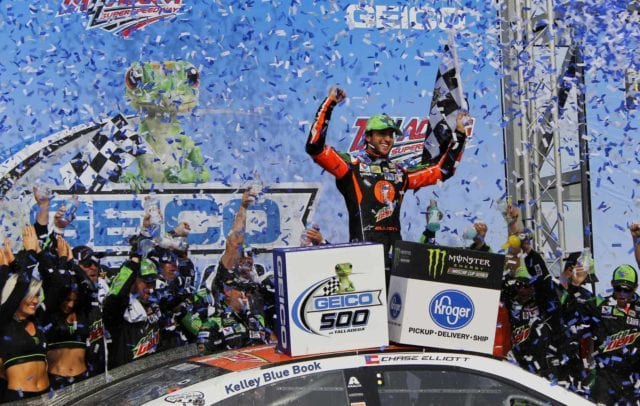 2019 has not been the year Chase Elliott and his Hendrick Motorsports team were looking for in the first nine races. Today, though, Elliott scored his first win at Talladega Superspeedway and his first win of the season after an extremely wild race.

This was the debut of the new superspeedway package without restrictor plates, with 550 horsepower (100 HP more than years past) and a very large nine-inch spoiler with a one-inch wicker extension NASCAR added on Friday.

If this package was expected to encourage pack racing and lots of passing, this package did not disappoint at all.

The race began calmly, but was more intense than we have seen in previous Talladega races with the Gen-6 car.

The first wreck took place on lap 10 when Bubba Wallace attempted to make a pass on Ryan Blaney for second but got loose and corrected into Michael McDowell, creating a multi-car incident and taking out some contenders. Kevin Harvick, Clint Bowyer, and Denny Hamlin were among some of the favorites taken out in this wreck and saw their day end early.

Chris Buescher and Matt DiBenedetto both took hard hits in an incident with only seven laps remaining after Buescher was turned by Almirola in the middle of the pack, creating a heavy impact for both Buescher and DiBenedetto. This would set up a late restart, and if history would repeat itself, this would not be the last incident of the race.

.@chris_buescher climbs out of the car under his own power after this hard crash.

On the ensuing restart, Logano held the lead until two laps to go when Elliott made the move with help from his teammate Bowman, and held off the furious charge behind him coming to the white flag. Ricky Stenhouse Jr. got into the wall on the last lap but NASCAR decided not to throw the caution flag and let the drivers race it out.

The dreaded “Big One” did not take place until the final lap. Kyle Larson and Jeffrey Earnhardt both took very hard impacts into the inside wall, with Larson tumbling down the backstretch multiple times. All drivers involved were okay and none had any injuries to report.

The race featured an immense amount of lead changes, more than either Talladega race last season. Logano, Elliott, and Aric Almirola all led more than 20 laps, and all contended for the win. Three- to four-wide racing took place all race long, with very little single-file action.

Race winner Elliott ultimately led the most laps, spending 44 of the 188 laps up front.

Elliott not only picked up his first win of the season, but Chevrolet’s first as well. He locks himself into the Playoffs, and now can rest easy before September.

Kurt Busch, Ryan Newman, Brendan Gaughan, Almirola, and Kyle Busch rounded out the top ten after all the carnage that took place.

The Monster Energy NASCAR Cup Series heads to Dover International Speedway for their next event on May 5.