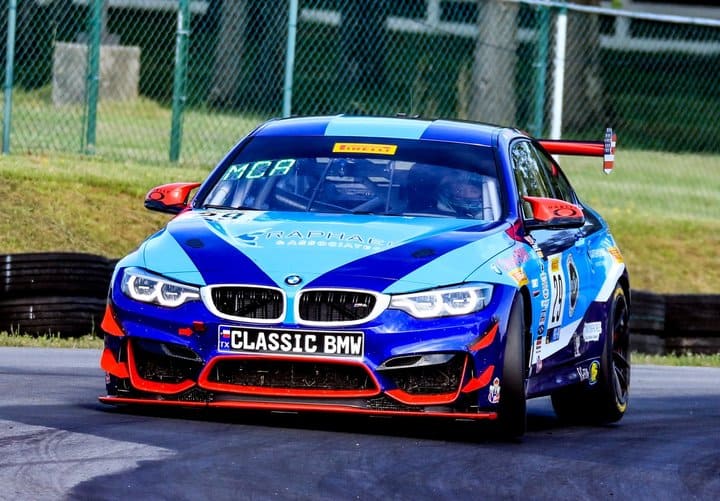 In Pirelli GT4 America SprintX action, it was an excellent weekend at VIRginia International Raceway for Fast Track Racing.  Stevan McAleer and Justin Raphael won Race No. 1 on Saturday (April 27) and came within a whisker of a weekend sweep on Sunday (April 28)

AutoTechnic Racing’s Kris Wilson led from the pole in his BMW M4 GT4 and used his decades of racing experience to hold off the pack, including the NOLAsport No. 47 Porsche of Matt Travis.  The pace was slowed on Lap 3 when KohR Motorsports’ Rich Golinello spun his Ford Mustang GT4 in Turn 5.  Golinello was then hit by Flying Lizard Motorsports’ Michael Dinan.  Golinello was transported to a local hospital afterwards and at last check, was still receiving treatment.

Once the race resumed, Wilson was able to maintain his advantage until the mid-race pit stops.  The stops were crucial to the race as a number of changes resulted.  NOLAsport’s Jason Hart ended up in the overall lead after the stops with one of the fastest cars on track.

Further back, Raphael had made some progress early on from the 13th starting spot, but was still quite a ways behind at the midpoint of the race.  After the pit stop/driver change, McAleer was in eighth.  Over the final 30 minutes and change, McAleer was able to charge to the front while holding off Stephen Cameron Racing’s Greg Liefooghe.

McAleer made steady progress through the field and caught Hart for the overall lead with 13 minutes to go.  A battle erupted between the veteran racers.  With 10 minutes to go, McAleer was able to use the straight-line speed of his BMW M4 GT4, which had been repaired after a practice crash on Friday, to get past Hart for the lead.  From there, McAleer was able to pull away to take the overall victory.

“Liefooghe was giving me a run for my money early in the race,” McAleer explained after the race.  “I was trying to conserve the tires and I notice one of the Caymans was coming back to us. So, I just put my foot down and this is the best the BMW M4 has been all weekend. The Classic BMW crew did an incredible job with the job and Justin ran well. You have to have two good drivers in this GT4 class to win it. I came from Scotland in 2006 and living out a suitcase. I was lucky enough to hook up with Justin and the Classic BMW team. We got second last year at COTA and I know Justin wanted a win very badly this year. I’m so glad we could pull it off this early in the season.”

McAleer beat Hart and Travis to the line by 2.223 seconds for the overall victory.  NOLAsport’s second-place finish overall was still good enough to win the SprintX Pro-Am class.  Their margin of victory was 2.509 seconds over the Stephen Cameron Racing BMW of Liefooghe and Sean Quinlan.  The second Fast Track Racing BMW of Toby Grahovec and Chris Ohmacht finished fifth overall and third in Pro-Am.  However, Grahovec had contact with John Allen in the No. 16 BMW in the closing laps.  Grahovec was judged responsible for the incident and was given a 30-second post-race penalty.  While it did not cost the No. 92 team a position in class, it dropped them from fifth to 11th overall.

In GT4 East Am, Epic Motorsports’ James Clay and Randy Mueller led flag-to-flag to take a convincing victory in their BMW M4 GT4.  The performance was good enough for fourth overall.  Their margin of victory was a massive 46.34 seconds over The Racers Group’s Derek DeBoer and Sean Gibbons.  Finally, the SprintX Am class was won by Rearden Racing’s Vesko Kozarov and Jeff Burton in their Audi R8 LMS GT4, formerly campaigned by Case-It Racing in collaboration with Flying Lizard Motorsports.  Kozarov and Burton, who finished sixth overall, finished 21.614 seconds ahead of GMG Racing’s CJ Moses and James Sofronas in a similar Audi.  NOLAsport’s John Capestro-Dubets and Mike Vess were third.

Park Place Motorsports’ Trent Hindman originally won the pole for Race No. 2.  A Saturday night engine change resulted in a 10-place grid penalty for the No. 77 Porsche.  That penalty elevated Hart to the pole.  From the pole, Hart led early, but had to deal with McAleer.  On Lap 5, McAleer was able to make the move for the lead.

Further back, Hindman was making his own gains, moving up to third from 10th.  Then, the tire issues that plagued the Pirelli GT4 America Sprint races cropped up again.  Hindman cut his left rear tire on Lap 13 and was forced to pit.  Luckily, by the time Hindman got his Porsche back to pit road, the pit window had opened.  The issue did put the team at a competitive disadvantage, though.

McAleer stayed out as long as he possibly could before giving way to Raphael.  Here is where Fast Track Racing’s bid for the weekend sweep came apart.  During the GT4 America SprintX races at VIR, there was a minimum pit delta during mandatory stops of 71 seconds.  Even with a few seconds of nothing happening since the work was already done, Raphael exited pit road three-tenths of a second too quickly.  With no grace time available, that is a penalty.

Raphael exited the pits with a 19-second lead, but the penalty was not assessed all that quickly.  As a result, Raphael could not serve the drive-through penalty before Matthew Fassnacht spun from second overall in the Roller Coaster section of the course.  The caution brought everyone back together for a final dash with roughly three laps to go.

The plan was that Raphael would come into the pits to serve a drive-through penalty for the pit window infraction at the end of the first green lap.  That never happened since Hindman’s teammate Alan Brynjolfsson suffered a brake failure on the restart.  The No. 77 Porsche went straight at Turn 1 and impacted the tires to bring out another yellow.

The race ended under yellow before Raphael could serve his penalty.  The drive-through penalty was thus converted to a 30-second penalty.  As a result, the No. 29 BMW dropped from first to 11th overall.  That gave the overall victory to NOLAsport’s Hart and Travis.

Fast Track Racing’s Grahovec and Ohmacht ended up second (fourth overall), but a misunderstanding resulted in a post-race penalty.  On the final lap coming to the finish under yellow, Ohmacht accidentally passed Burton’s Audi.  Officials swapped the two positions after the race.  It didn’t effect the No. 92’s class finish, but dropped them from third to fourth overall.  Liefooghe and Quinlan ended up third in class.

The pit delta penalty not only cost McAleer and Raphael the overall win, but the GT4 East Pro-Am victory as well.  The penalty elevated Radisic and Karl Wittmer to the class win and second overall.  Doghouse Performance’s Audi for Andy Pilgrim and Adam Poland were second, while McAleer and Raphael had to settle for third.

Kozarov and Burton wrapped up a weekend sweep in SprintX Am by finishing third overall on Sunday.  Wilson and Allen in the AutoTechnic Racing BMW were second, while Vess and Capestro-Dubets were third.  Finally, BGB Motorsports’ Thomas Collingwood and John Tecce claimed victory in a depleted GT4 East Am after Fassnacht crashed out of a massive lead.  The victory came despite a drive-through penalty for keeping the engine running during their driver change.

Please get your facts right. Dinan spun his car going into turn 14 and slammed into Golinello at 120 mph, Golinello was an innocent victim.