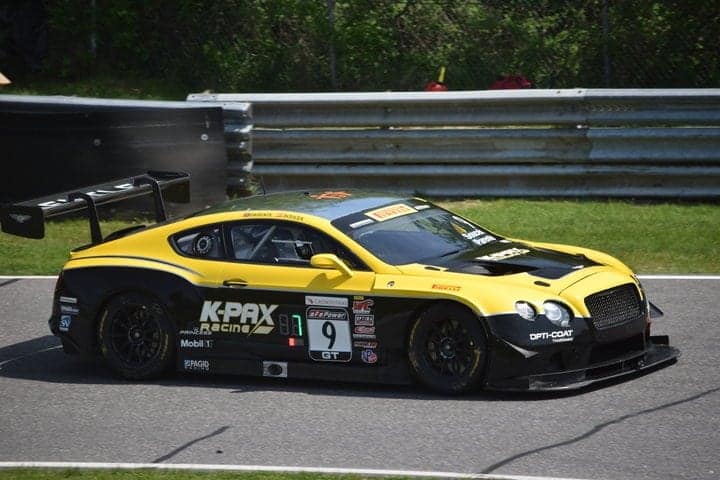 K-PAX Racing’s Àlvaro Parente and Andy Soucek dominated much of the first Blancpain GT World Challenge America race of the weekend Saturday (April 27) at VIRginia International Raceway.  Parente led easily from the pole, while Soucek induced Wright Motorsports’ Scott Hargrove into a costly mistake to hold on to claim victory.

“We had a great pit strategy, and we weren’t undercut by our rivals,” Soucek said after the race in a press release.  “We ended up having a good gap from Hargrove, but unfortunately I made a small mistake going wide at the Oak Tree, and I went off the track a little bit. I was on the grass and lost a couple of seconds, and my margin was gone.”

Parente started from the pole in his Bentley and proceeded to open up a small gap on the field.  Wright Motorsports’ Patrick Long gave chase in his Porsche.  Teammate Rodrigo Baptista was in third, keeping both cars in sight.

For Baptista, his day came to an early end when he drove into the Oak Tree Turn just a little bit too fast.  The No. 3 Bentley slid head-on into the tires to bring out the race’s first full course caution.  Baptista was ok, but he was out for the day.

A number of teams lost a significant amount of time during the mid-race mandatory pit stops.  Only K-PAX Racing’s No. 9 and Wright Motorsports’ No. 58 put up decent times.  Regardless, Soucek inherited a decent lead.

Once in the car, Hargrove was on a mission to run down Soucek.  With the help of Soucek’s aforementioned off-course excursion, he was able to do that and put the pressure on.

Hargrove made much of his gains on Soucek at the Oak Tree Turn.  Soucek noted after the race that Hargrove was “really pushing” there.  He thought Hargrove was going over the edge.

Sure enough, Soucek turned out to be right.  With less than 15 minutes to go, trouble struck.  In a similar incident to Baptista’s, Hargrove slid into the tires in the aforementioned Oak Tree Turn.  The crash brought out a second caution and ended the day for the No. 58.

There was enough time left once Hargrove’s crash was cleaned up for a three-lap shootout.  In that stretch, no one could touch Souchek on the way to victory.

Parente and Soucek’s margin of victory was 3.246 seconds over Alegra Motorsports’ No. 24 Porsche for Wolf Henzler and Marco Holzer.  R. Ferri Motorsport’s Ferrari for Toni Vilander and Miguel Molina were third.

In Pro-Am, it was a day for Acuras.  Gradient Racing’s Till Bechtolsheimer led early in one of his best runs.  Meanwhile, Racers Edge Motorsports’s Martin Barkey had an off-course excursion in his NSX after contact with RealTime Racing’s Bret Curtis.  Curtis was given a drive-through penalty for avoidable contact, taking the No. 43 out of contention.

During the pit stops, the No. 80 for Racers Edge Motorsports with Kyle Marcelli now at the wheel, jumped Gradient Racing on the stops.  From there, Marcelli ran away from the pack.  The late yellow brought Ryan Eversley right up to his tail, but Marcelli was able to hold off the defending TCR champion to take the win.

Marcelli and Barkey ended up fourth overall and beat the No. 5 Acura of Bechtolsheimer and Eversley to the line by 0.353 seconds.  The No. 99 One11 Competition Ferrari of Matt Plumb and Alfred Caiola crossed the line third in class, but Plumb jumped the final restart.  The No. 99 was given a 30-second penalty as a result that dropped them to sixth in class (10th overall).  DXDT Racing’s David Askew and Ryan Dalziel were elevated to third as a result.  In the Am class, Squadra Corse Garage Italia’s Caesar Bacarella and Martin Fuentes led flag-to-flag to win.